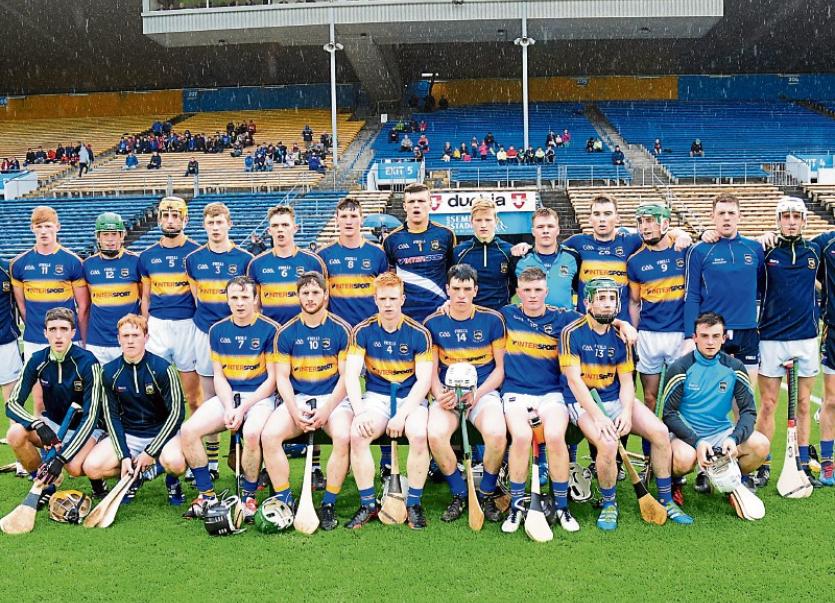 The seconds are ticking down to Tipperary's clash with Waterford in Wednesday's (July 27th) Bord Gáis Energy Munster under-21 hurling final at Walsh Park, Waterford (7pm).

Tipperary's semi-final win (2-12 to 1-13) over a highly-talented Limerick team has provided plenty of encouragement ahead of this decider. But William Maher's hard-working side will have improve significantly if they are to get the better of the Déise - Limerick were two-to-one on to get the better of Tipp in the semi-final; this time Waterford are unbackable at three-to-one on to win a fourth title and a first since 1994.

How the Tipperary players perceive the obstacle that they find before them is vital ahead of this contest and under-21 manager William Maher was eager this week to emphasise that his panel are looking forward to the contest.

“We are really looking forward to it. It is a huge challenge, but it is also exactly the type of challenge that you want,” William Maher told the Tipperary Star.

“It is actually great - the bookmakers rarely get it wrong, but numbers like that have never won a game for anyone. It is another match that we are not supposed to win and we find ourselves striving towards the same thing. We were not supposed to beat Limerick, but we brought a good attitude and a good level of desire to that game. And, that's what we will aiming for again. Our lads know that the gauntlet has been thrown down to them and they are looking forward to the challenge.

“Obviously, Waterford are a very, very good hurling team - this Waterford team is probably their greatest under-21 team ever. They are the favourites and the pressure is on them to win this final at home,” William Maher said.

This challenge represents a huge test for Tipperary. Although Waterford have never faced Tipperary in a Munster under-21 final and are only appearing their seventh decider ever the Déise have a huge affection for this group of players. Indeed, the reaction of their supporters to the eighteen-point victory over Clare (3-23 to 1-11) in the semi-final was something to behold - Waterford helped themselves to 3-13 in the second half alone. Watch out for senior stars Patrick Curran, the Bennett brothers (Stephen & Shane), Austin Gleeson, Tom Devine and Conor Gleeson who are sure to play a significant role for Waterford on Wednesday.

But when you are prepared to work as diligently as this Tipperary side appear to be you have a chance. And, as Tipperary make the trip to Walsh Park on Wednesday evening in search of a 21st provincial crown (last won in 2010) William Maher's players may well nourish themselves with a three-year-old memory. When the sides collided in the 2013 minor hurling championship Tipperary won in Waterford thanks to a 2-18 to 1-15 scoreline - incidentally that minor side featured Colin O'Riordan and Shane Hennessy, both of whom are ruled out of this year's campaign for varying reasons. Subsequently Tipperary were defeated by Limerick in a Munster semi-final while Waterford re-grouped in sensational fashion to win the All-Ireland title.

On Tuesday morning Tipperary under-21 hurling manager William Maher (Ballingarry) announced his starting team to face Waterford - due to an injury to Jack Shelly (Mullinahone) the inclusion of Toomevara's Jason Ryan represents the only change to the starting team from the semi-final victory over Limerick. Unfortunately, Jack Shelly has suffered a cruciate knee injury.

Toomevara men, however, are born with their sleeves rolled up and William Maher is confident that Jason Ryan can come in and perform for this Tipperary team: “Jason is a very driven sort of guy and he was very disappointed to miss out (against Limerick), but his attitude was second to none. Jason came on against Limerick and did a serious job for us. Like everyone else on the panel he has a serious attitude to what we have asked the players to do.”

Another complication this week for the Tipperary under-21 management team to deal with is the predicament that Josh Keane finds himself in - the Golden-Kilfeacle man played a significant role in Tipperary's senior football qualifier win over Derry on Saturday and will feature on the under-21 hurling team on Wednesday evening before re-grouping in time to face Galway in an All-Ireland football quarter-final at Croke Park, Dublin on Sunday next.

William Maher, however, has declared this week that Josh Keane is one hundred per cent fit.

“Josh (Keane) is fine, he got a full body rub on Saturday after the game in Cavan, he did his recovery and he is one hundred per cent. He will be fine,” explained William Maher.

The game will be televised live on TG4.