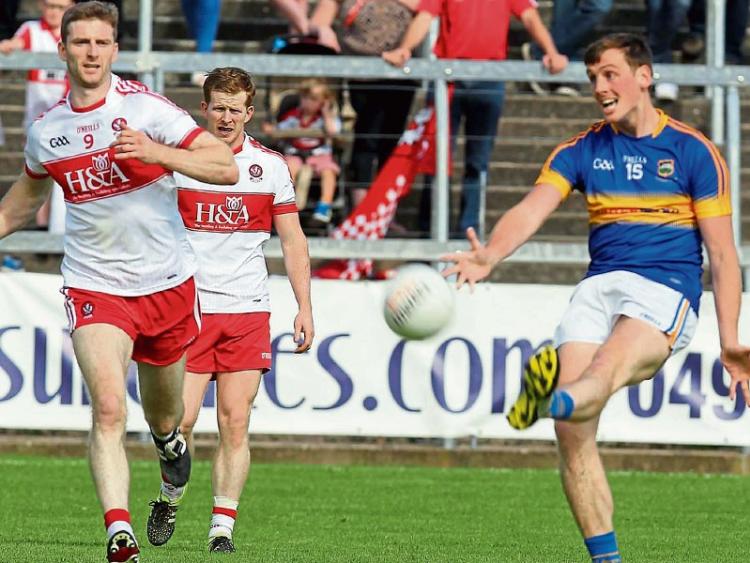 Tipperary’s pulsating one point victory over Derry last Saturday in Kingspan Breffni Park earns the Premier County their first quarter final meeting since the commencement of the backdoor qualifiers in 2001.

The win thanks to two late points by Conor Sweeney gave Tipperary a clash with Galway and it quickly erased the many disappointing memories in Gaelic Football terms since Tipp last lost a semi final to Cavan at Croke Park in 1935.

That defeat was to Cavan but the Breffni men were much kinder this time as the immaculate Kingspan Breffni surface witnessed a pulsating game - probably the best game in this year’s championship so far.

It was a stunning victory for Tipperary, who overcame the disappointment of the Munster final defeat, and just edged out an impressive Derry who had so well in their earlier qualifier games.

Sweeney’s late scores arrived in injury time after Tipperary saw a four point lead overturned by a Derry side which had just produced an unanswered 1-4 between the 62nd and 69th minute period that gave them a two point lead.

Derry had smelt victory but when the fourth official produced five minutes on the injury time clock, Tipp followers sighed with relief.

Just like the Cork game last May, Kevin O’Halloran began the revival with a pointed free in the 71st minute. Tipperary continued to respond and when Conor Sweeney levelled a minute later thoughts of extra time were a possibility.

But somehow Tipperary had loads of energy which came from beyond the call of duty and a quick free by Josh Keane in the 73rd minute set up an unmarked Conor Sweeney to score an angled point from outside the twenty metre line. Was it the winner?

However it didn’t end there as Derry went for the equaliser. O’Halloran pulled down Brendan Rogers and escaped a black card. Mark Lynch’s effort failed to reach the target and following a series of circuitous hand passed movements, a last minute effort from Brendan Rogers went agonisingly wide much to the delight of the Tipperary team and their small following who raced out on the pitch.

No doubt this game tested the strongest of hearts but Tipp deserved their victory.

Despite conceding the opening score they produced a delightful opening eleven minutes when racing into a 0-5 to 0-1 lead with the scores spreading across the spectrum, starting with Michael Quinlivan’s free in the fourth minute and quickly followed by a points from play by Conor Sweeney, Philip Austin and Peter Acheson with Quinlivan rounding off the quintet with a brilliant score from play forty five metres out.

Derry had moments too especially in the 12th minute when Evan Comerford denied Danny Heavron a goal at the expense of a point to make it 0-5 to 0-2.

Tipp were 0-6 to 0-3 in front before Quinlivan brought Derry keeper Thomas Mallon out of his comfort zone, forcing the Derry keeper to get down low to meet to his fisted effort after the Commercials man got to a high lobbing ball from Acheson out on the wing.

O’Halloran’s forty-five made it 0-7 to 0-3. However Tipp’s momentum dropped somewhat after that. They went ten minutes without scoring and struck the first of six half wides in a row in the 25th minute.

Derry led 1-7 to 0-8 then and wing forward Enda Lynn extended the lead to three but Tipp fought back through Kevin O’Halloran (free) and Quinlivan to leave the half time score Tipperary 0-10 Derry 1-8. Was it enough as Tipp faced a stiff breeze in the second half?

George Hannigan made way for Alan Moloney as Quinlivan moved to midfield and scores were level three times over the next eight minutes. It was action from end to end with spectators on the edge of their seat.

At the other end the Derry goalkeeper caused his team incredible panic when he slipped in an attempt to clear and the stray clearance went straight to the waiting hands of O’Halloran who went forward from twenty metres to steer a low ball past the helpless Derry keeper.

Suddenly Tipp were 1-13 to 1-10 ahead with twenty two minutes remaining.

Mark Lynch pulled one back for Derry but Tipp replied with points by Josh Keane and a Quinlivan free from close in.

In continuing the end to end exciting fare, Derry rallied but in a position of danger, they were curtailed when a fussy Marty Duffy penalised Derry substitute Michael McEvoy for over carrying.

Another Derry sub, Emmett Bradley did score but Tipp appeared to have the legs on Derry where halfbacks Bill Maher and Robbie Kiely left their line vacant time and time again.

Josh Keane was excellent while Philip Austin covered every inch of ground and points by Quinlivan (free) and Bill Maher extended Tipp’s lead to five, 1-18 to 1-13 after the hour. The dream was growing stronger.

However things turned nightmarish when Derry began their comeback.

Substitute Eoghan Brown got the goal following a great move but claims of a foul on the hard working Acheson in the build-up went unheard.

Tipp were suddenly two points in arrears and defeat staring them in the face.

In the midst of it all they lost Robbie Kiely through injury.

However they refused to read the script and after O’Halloran and Sweeney gathered the winning points, thoughts of a quarter final meeting with Galway in Croke Park became a reality.