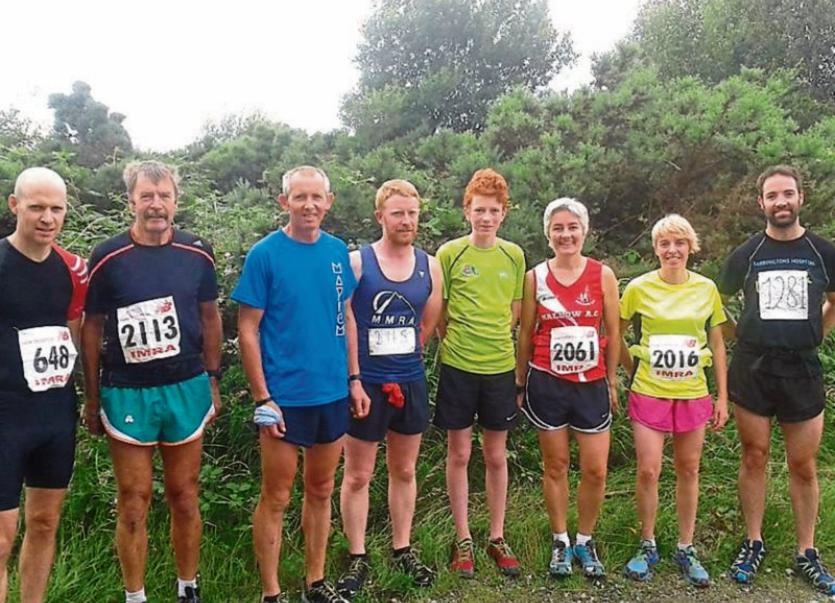 Mooreabbey Milers AC were competing countrywide over the last week. Club members took part in races in Cork, Kerry, Limerick and Wicklow and secured podium positions in many of these races.

On Wednesday evening, 20th, Tom Blackburn won yet another MMRA Wednesday league trail race. This one was a nice 5k race through the Killeagh Woods in east Cork. Willie O'Donoghue ran a great race in 7th with Ewan Cunningham in 14th. Next up in this League is in Murroe, county Limerick, on the 27th followed by The Paps race in the Derrynasaggart mountains in county Kerry on August 3rd. This will conclude the MMRA Wednesday league for 2016.

On Saturday 23rd last, three men from Mooreabbey Milers traveled up to county Wicklow to compete in the IMRA Irish Championship race. This took place on Lug na Coille. Weather conditions started out as clear and favourable but as soon as the race started at 1.00 pm, a heavy mist came down the mountain. This made navigating up and down the mountains a little trickier and underfoot conditions were slippy. Runners had to have their wits about them on the steep descent to the finish line. Tom Blackburn ran a strong race to cross the line in third position. Robert Cunningham was happy with his race and Ewan Cunningham was the only junior to complete the shorter course.

Willie O'Donoghue was thrilled with his win in the Noon to Moon 5k last Sunday 24th. This race was held in conjunction with the festival in Bruff, county Limerick. Willie ran a fine time of 18.53.

JT Ryan was one of hundreds of runners who enjoyed the scenic Run Killarney half marathon on Sunday. The route made its way past the lakes of Killarney and through the grounds of Muckross House. JT ran a very good time of 96 minutes in this enjoyable half marathon. Chris Gallaghue flew around the 10k race in this event also. Well done all.

Mooreabbey Milers AC train every Tuesday and Thursday at 7.00 pm in the community field, Galbally. All are welcome to join us.