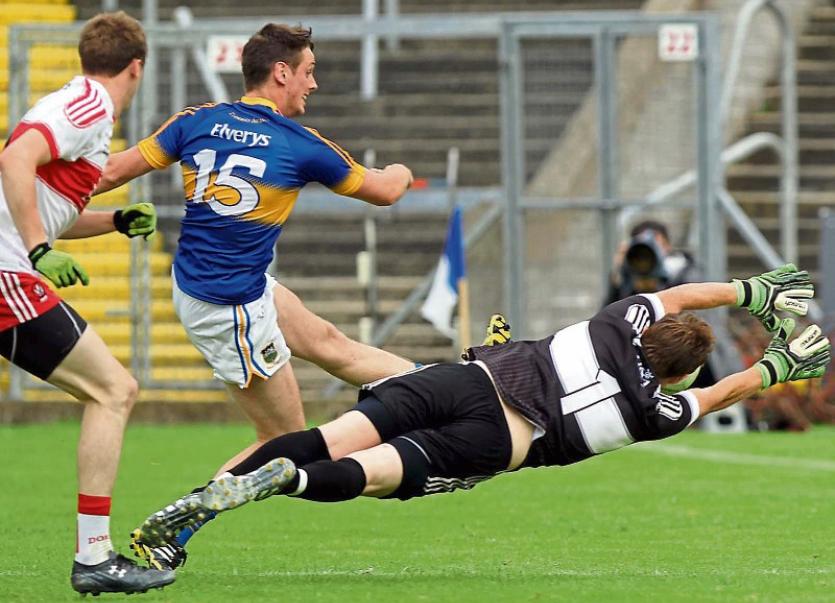 So, it will be Galway on the treble. Senior hurlers and footballers as well as minor hurlers face tribal opposition in their bids to extend championship seasons.

We’ll become quite familiar with our western neighbours then over the coming weeks following last weekend’s events. That historic football victory over Derry has ensured a triad of clashes between the counties.

There was a time in the late eighties and early nineties when Tipp/Galway relations were very strained. Intense rivalry, piqued by the Keady affair, led to a lot of bad blood, though the passage of time has, thankfully, allowed all that fade into the mists of history. Most of the present Tipp panel wasn’t even born in 1989.

More recent rivalry has been without rancour, though no less intense for all that. We still smart from last year’s semi-final encounter where Shane Moloney swooped late, and lethally, for a precious winner. Galway’s physical approach that day seemed to catch Tipp off-balance.

This time there will be no excuses. We’ve been forewarned after last Sunday. Galway is on a kick-back after their Leinster final defeat and the stinging fall-out that ensued. You can’t avoid the sense that the criticisms burned deep and Sunday showed evidence of a more defiant approach.

Making a definitive judgment on Galway, however, is never easy. They’ve had their good days in the past but been unable to follow-up so it remains to be seen if things are any different in 2016.

They certainly had enough in the tank for Clare on Sunday, albeit a Banner team that’s still well short of the brio of 2013.

An interesting link between the counties on August 14 will be Micheal Donoghue. He was part of Eamon O’Shea’s backroom team, unseen by the general public, but very well respected within the Tipperary camp.

One of the crueller aspects of Ger Loughnane’s assault on Galway after the Leinster final was his caricaturing of Donoghue. It just seemed to be gratuitously offensive.

Anyway Donoghue’s work with Tipperary will have given him some insight into the Tipperary mindset and how individuals tick. Against that there’s quite a different personality to the side now under Michael Ryan than there was with O’Shea.

Before the hurlers get to face the maroon of Galway the footballers will have their day in Croke Park next Sunday following that thrilling triumph over Derry in Breffni Park.

You could hardly rate the win a sensation given the standing of both counties at present, but, nonetheless, it was a hugely significant result for the county reaching the last eight for the first time since the qualifier system was introduced.

There was a remarkable similarity in the manner of victory here and the win over Cork in the Munster championship.

In both cases they built substantial leads but were caught approaching the end and had to show incredible resolve to rescue the games at the ‘death’.

Derry’s late surge, including the goal, seemed to have stolen the show but Conor Sweeney’s pair of points showed remarkable bottle.

So many key championship games are won and lost in those crucial final moments so you have to admire the mental toughness of the side to come through in that manner. Let’s hope our hurlers are developing a similar trait.

Ultimately I suppose the final push to victory reflected the attitude of the team throughout the contest. They went to play open, attacking football and stuck to the script to the very end.

It resulted in an exciting contest unlike some other shambolic shows we’ve suffered in recent times. I see where a game in Donegal at the weekend ended on the score line 0-3 to 0-2; Jim McGuinness you’ve a lot to answer for.

Anyway Tipperary on Saturday had many heroes from the likes of Robbie Kiely in defence to Peter Acheson to the likes of Conor Sweeney, Michael Quinlivan, Kevin O’Halloran and Josh Keane in attack. My favourite was Bill Maher.

The refereeing on Saturday, I’m afraid, was as baffling to me as it was to others, though in fairness there were some quizzical decisions on both sides.

We might (should?) have had a penalty before half time; I’m told Kevin O’Halloran was deemed to have over-carried so play came back for an earlier foul. Indeed. The ref was correct, however, on the Derry goal; Peter Acheson lifted the ball from the ground with his knees, which is illegal.

If Bill Maher caught my eye on Saturday, another player who has struck a chord with me recently is Brian Fox. I’ve often felt he deserved more opportunities with county hurling sides but it’s his comments in recent times that have been so refreshing.

Before the Munster football final he was critical of all this focus on the players they were missing. He was damn right too. They lost three players, two to hurling, and the others were replaced by guys just as good. All this whinging about missing players – even Eoin Kelly was put in that category at one stage! – was demeaning of the players on the team who were manfully doing the business.

Most teams lose players for whatever reason, so you move on with what you have and stop the poor-mouthing.

More recently the Annacarty player gave a very honest appraisal of his own attributes and of Tipperary’s ranking where he stated the obvious; we’re not in the running for Sam Maguire.

What a refreshing honesty, in contrast to the hot air you get from others. With players like that leading the charge Tipp football is heading in the right direction.

They’ll be outsiders against Galway but won’t be intimidated by the prospect of facing them. The Connacht champions have got obvious momentum behind them and may well be a step too far for this particular Tipperary outfit. Nonetheless I’ll be surprised if they don’t have a real go at it. Good luck to them.

Meanwhile our minors now know for certain what they already assumed, that their semi-final opponents will be last year’s conquerors, Galway.

The Tribesmen walloped Antrim last weekend with another one of the Canning clan, Joe’s nephew, among the stars. They’ll be strong favourites to retain the crown though I’m sure Liam Cahill and company are eagerly awaiting their chance to have a pop at them.

It should bring the followers in early to Croke Park on August 14.

Finally, an interesting result on the home front last weekend came from the North division where Templederry surprisingly fell to Roscrea in the divisional quarter final. After their great win over Nenagh in the previous round this was a heavy blow to the Kenyons who are now finished for the year.

They lost in the end by a mere three points, though I’m told two late goals put a gloss on that deficit.

I had obviously been underestimating Roscrea who I’m told are making progress on a number of fronts. It’s a Roscrea side that has a slightly unfamiliar look to outsiders, without the Fitzgeralds, Liam England, Alan Tynan and others.

Templederry strike me as a team with a lot of potential who just keep coming up short.

Names like the Stapletons, Gearoid Ryan and Adrian Ryan have made the club name a familiar one on county team sheets though obviously they haven’t quite got the depth of panel to make a major breakthrough; they’ve never won the North division.

The remaining North quarter finals, I understand, are coming up this weekend and early next week. A highlight one could be the meeting of Kilruane and Borrisoleigh; Kildangan face Ballina and Burgess play Borrisokane.

Kildangan are fancied to retain their title though some suggest that Kilruane have potential to upset expectations. Either way I’m sure Michael Ryan will be keeping fingers crossed that there are no injuries to county personnel in the weekend’s matches.