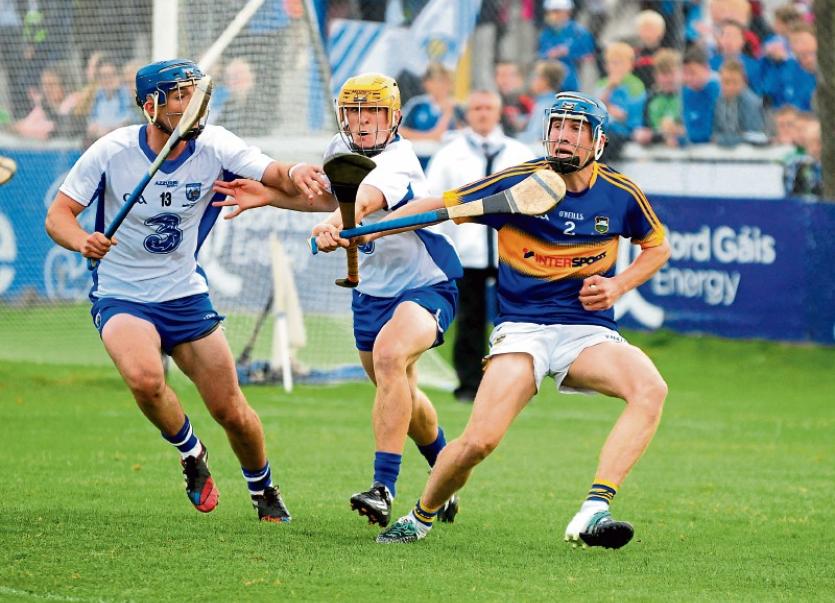 Wednesday night's Bord Gáis Energy Munster under-21 hurling final ended in cruel heartache for the Tipperary hurlers when the Déise, inspired by Austin Gleeson, thundered to a ten-point win at Walsh Park, Waterford.

This Tipperary team - led by manager William Maher (Ballingarry) and selectors John Devane (Clonoulty-Rossmore) & Liam O'Shea (Kilruane MacDonagh's) - gave all of themselves to the campaign, but, sadly, the brutal truth of the matter was that Waterford proved the superior side. Still though the final margin was cruel - the Tipp lads were asked to a banquet and then forced to eat broken glass. But, you would hardly begrudge Waterford their fourth win over Tipperary at the grade and their first provincial title in twenty-two years.

Against a stiff breeze in the opening half Tipperary did especially well with Willie Connors particularly effective at linking the play and picking out his inside forwards, most notably Andrew Coffey, with a series of delicious deliveries.

At the break Tipperary trailed 0-7 1-6, but had restricted Waterford to two points from play (Tipp 0-5 from play). There was a title there to be won and Tipperary were now in a position to win it. Waterford surged five clear early in the second half, but in a highly encouraging show of grit Tipp fought back and when Josh Keane shook off two tackles before firing over an equaliser in the 45th minute (0-14 to 1-11) anything was possible.

To their credit, however, Waterford elevated themselves to another level entirely in the final quarter. Indeed, the Déise out-scored Tipperary 1-8 to 0-1. In front of a crowd numbering 8,843 Waterford surged clear during a devastating eight-minute period (46th-54th) when firing 1-6 without reply and with that the Tipp bull was well and truly neutered.

Waterford's opening goal from Stephen Bennett was scrambled home in inauspicious circumstances during the opening half, but Bennett's contribution to his side's second in the 50th minute was extraordinary - Tom Fox had the Ballysaggart man bottled up and facing the corner flag only for the corner-forward to conjure a sensational flick over his head to find Peter Hogan on an inside-the-shoulder support run. Hogan's subsequent right-handed drive ripped like a furious harpoon into the corner of the net.

That magical moment, however, was over-shadowed by the display of Waterford centre-back Austin Gleeson. Tipperary managed to trick their way around Gleeson in the opening half, but in the second Gleeson exploded violently - he sat on the Waterford 45-yard line and dictated the game. Gleeson screeched across his backline and fired over four ridiculous points from play - despite playing into the wind Gleeson landed three of those from inside his own half.

Tipperary also had their heroes in Paul Maher, Ronan Maher, Willie Connors, Stephen Quirke and Andrew Coffey. And, it was a compliment of sorts to this hard-working Tipp side that it took an amazing piece of ingenuity from Stephen Bennett and an extraordinary display from Austin Gleeson to see them off.

Three Patrick Curran strikes (two frees, one '65) and an 11th minute effort from DJ Foran propelled Waterford into a 0-4 to no-score lead - Tipperary were slow to start, but also cursed their misfortune in the second minute when Conor Lanigan raced after a break in behind Mark Russell only to be pushed to the ground; referee Johnny Murphy waved away what seemed like genuine penalty claims.

Tipp steadied with an Andrew Coffey point in the 12th minute before Stephen Quirke added another - both strikes were created by two out-standing assists from Willie Connors. Josh Keane then enjoyed a slight sniff of goal (smothered) before further efforts from Andrew Coffey and Conor Lanigan tied the game (0-4 apiece) by the 16th minute. Tipperary's neat approach play, the elusive Andrew Coffey and Paul Maher's performance in defence were an encouraging feature of the performance thus far.

Mark O'Brien and Andrew Coffey then traded points before Tipperary took the lead for the first time in the 21st minute thanks to a Josh Keane free. A Patrick Curran free tied the game soon after before Waterford raced three clear in the 28th minute - Curran completely mis-hit an awkward free and although Tipp 'keeper Brian Hogan blocked the dipping shot Stephen Bennett was on hand to scramble home the rebound.

Still though Tipperary responded well and earned a free in the 33rd minute which Josh Keane drilled over - William Maher's men trailed by two (0-7 to 1-6) at the break and were very much in this contest.

During the opening three minutes of the second half Austin Gleeson fired over two long-range efforts to present his side with a four-point lead before Ronan Teehan managed a response for Tipp in the 34th.

With Gleeson dropping off and the Waterford midfield sitting that bit deeper Tipperary were finding it hard to pick their way through. Indeed, Waterford's counter-attacking game propelled the home side five clear (1-10 to 0-8) by the 36th minute thanks to efforts from Tom Devine and Patrick Curran (free).

Tipperary were wobbling, but in the 37th and 40th minutes corner-back Paul Maher won the ball and strode forward before setting up Andrew Coffey and then Stephen Quirke with two smashing diagonal deliveries. In the 41st minute Josh Keane added a free before a glorious Conor Lanigan flick set up Stephen Quirke for an effort which left one in it (0-12 to 1-10).

Waterford responded through Colm Roche, but Tipp were dictating the terms and conditions of the contest now - a Josh Keane brace (one free) tied the game in the 45th minute (0-14 to 0-11). The preamble to Keane's equaliser was especially pleasing as a combination of Andrew Coffey and Conor Lanigan turned over Austin Gleeson deep inside his own half.

Waterford, however, then turned the game on its head. An extraordinary Austin Gleeson point wrestled the initiative away from Tipp before Patrick Curran (free) added to his side's tally. Then came Peter Hogan's goal and, suddenly, the Déise were five clear. Roared on by a partisan crowd Waterford poured forward and added efforts through Tom Devine, Patrick Curran, Stephen Bennett and Austin Gleeson to force themselves into a nine-point advantage (0-14 to 2-17).

A Josh Keane free in the 55th minute represented token resistance and although Tipperary sought out late goals through Ronan Teehan and Stephen Quirke Waterford were deserving champions and added late frees which came courtesy of Patrick Curran and Austin Gleeson.