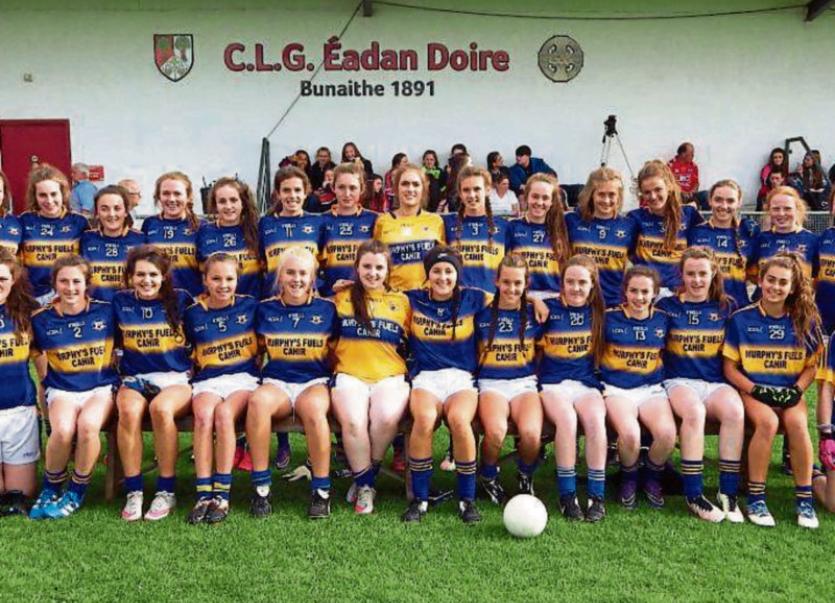 The Tipperary ladies football team thundered to a ten-point win over Louth in the All-Ireland under-16B final at Edenderry on Wednesday evening (3-16 to 1-12).

The Tipperary management team made some tactical moves directly from the throw-in when dropping Anna Rose Kennedy back in support of her defence and Angela McGuigan played a more outfield role. This appeared to unsettle the Louth side and McGuigan had Tipp’s first score, a pointed free. Louth replied with a nice point from Lauren Boyle, but from here on Tipperary were the dominant side playing some lovely composed football and constantly on the attack.

Lattin-Cullen’s Katie Cunningham was winning her inside forward battles and she put Tipp ahead in the fourth minute. There now followed an excellent passage of play with the defence moving the ball through midfielders Roisin Daly and Marie Creedon with half-back Anna Carey continuing her run before firing home Tipp’s first goal in the seventh minute.

Try as they might Louth simply could not make inroads into a tight Tipperary defence where Anna Rose Kennedy, Niamh Martin and Caitlin Kennedy were impressive. Tipp midfielder Creedon was mopping up too and dropping back before passing lovely ball to her forward colleagues while Boherlahan’s Aine O’Dwyer was a powerhouse travelling up and down her wing at pace.

Louth did manage two points in reply to the Tipp goal, but McGuigan and full-forward Sarah Delaney cancelled these out within a minute. McGuigan was now on song and added two more before midfielder Creedon also travelled forward to kick a fine point herself in the 15th minute.

Even at this early stage it was beginning to look as if Tipp were fast becoming the dominant team.

In the 17th minute Katie Cunningham, having made a clever run and getting in behind the Louth defence, fired home Tipp’s second goal. This move was following a surge up the middle by Anna Rose Kennedy, Aine O’Dwyer and Anna Carey. Full-forward Delaney scored a point from the kick-out and Tipperary were quickly getting out of sight.

Louth introduced a double substitution in an effort to stem the side. They scored their fourth point in the 20th minute, but then had three wides mainly due to the pressure from the Tipp defence where Lucy Spillane and Emma Cronin were making great blocks on the Louth attackers.

Delaney added Tipp’s final first half score, a point in injury time to leave Tipp ahead at the break 3-10 to Louth’s 0-4.

Louth began the second half in determined fashion and for the first five minutes had most of the possession, but only managed a point from play and two wides during this dominance. Tipp had made a goal line clearance during this period which further frustrated the Louth Ladies.

Tipp’s Ciara Halpin had replaced Katie Cunningham at half time and Tipp once more began to dominate and when full forward Sarah Delaney goaled again in the 5th minute the contest was as good as over. Fethard’s Lauren Dowling replaced her club mate Lucy Spillane on twelve minutes as Tipp began to use their talented bench. A Muireann O’Connell brace and a Niamh Martin point put Tipperary further ahead.

Louth continued to press and were rewarded in the 23rd minute with a fine goal from full-forward Hannah Carolan.

Cahir’s Christina Delaney replaced Aine O’Dwyer who had given her all for the cause.

The two teams now traded points, but it was goals that Louth now required.

Louth finished with three unanswered points, but by then Tipperary were too far ahead to be caught and when referee Jonathan Murphy blew the full time whistle Tipperary were worthy winners.

Following the presentation of the cup to winning captain Roisin Daly, the player of the match award was announced - for her strength, determination and consistency throughout the match Tipperary’s Marie Creedon was announced as the recipient.

Congratulations to manager Ed Burke and his backroom team of Peter Creedon, Tony Smith, Biddy Ryan, Trish McElwee and physio Ollie Griffin. This was a well-prepared team who knew the game plan inside out and which they applied throughout the contest. The team played with a confident maturity making almost no errors throughout which is impressive in any underage team.