Reward for years of loyal support Next up Mayo or Tyrone on Sunday, August 21 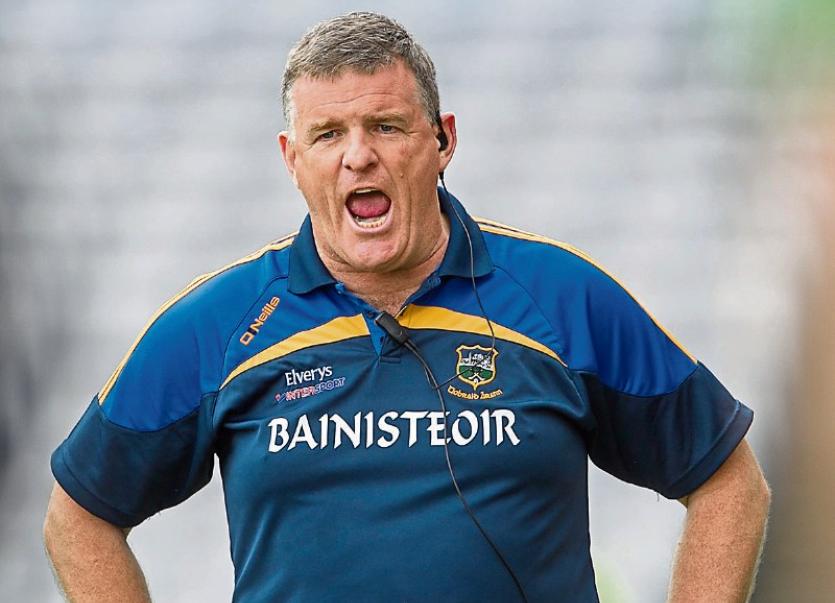 Deep in the underground media room at Croke Park after Sunday's game, a joyful Tipperary manager, Liam Kearns, was naturally very upbeat about his side’s almighty display against Galway earlier in that afternoon

The Kerryman, in his first season in charge of Tipperary had plenty to say....

He began “We were confident coming here today, we can say that now, we were confident that we would produce a performance. We didn’t expect to win the game the way we won it but certainly we were coming here to win. And we are improving all the time. We felt Galway were decent but had things to prove as well. People were saying the tradition of Galway was going to wipe us out in Croke Park but we didn’t feel it,” said the Tralee man.

“I wouldn't have been happy at half-time. We were three points up but I felt 10 would have been a fairer reflection of the game. I felt we missed an awful lot of chances, created an awful lot of chances but missed a lot of them. I think we were on top in most of the sectors of the pitch at that stage. That’s something we are doing all the time. We won the game against Derry by a point but we were seven or eight points better than Derry I felt. We won the game against Cork by a point and we were seven or eight points better than Cork. In fairness today we put it on the scoreboard in the second half. We have got to be thankful for that and hopefully they are learning all the time, they’re young” the manager added.

But a word of caution quickly followed:

“We are not getting carried away now. At the end of the day if Kerry meet us in the morning they will be expected to beat us by 10 points again. That’s the reality of it. We are not going to get carried away. We did play very well today though. But I don’t know whether it’s Tyrone or Mayo, they will both be expected to beat us as well but to be talking about ourselves in the same breath as Tyrone, Dublin, Kerry, that’s a fair achievement,” added the smiling manager.

One sore point with the first-year Tipp manager, however, seems to be the lack of respect Tipp have received to date..

“Nobody gave us any credit for beating Cork. It was all about Cork and how could Cork lose and they having so much talent and so much behind them and they’re winning All-Ireland U21s and to lose to Tipperary is a disgrace. We got no credit at all for that game and as I said to the lads the script here is that we are supposed to slip away after today and to be happy for our day in the sun but we were not here to read the script we were here to win. That was the bottom line for us”, he added.

“We have only a small band of players. We could do with a bigger band. Tipperary is a big county. I hope the players will get the support they deserve because they are putting in a massive effort on behalf of the county and they are doing the county proud and they are playing great football. I think they deserve more support. But we are delighted for the loyal supporters who travel everywhere with them. They know them all on first name terms and I am just delighted for them and their day in the sun.”

Pressed on Galway’s approach to the game and their well-regarded defence..

“We knew there was going to be a blanket defence there. We knew exactly what Galway were going to come here with. There was no panic. You saw our players, they were well organised, they knew what they had to do, they knew their job. and we got it done. But I have to say we didn't expect to win the way we won it. We certainly knew what to expect from Galway. They have played a defensive game in Connacht and we knew we would have to be patient. We got that against Kerry, we got it against Cork a little bit, we got it against Derry maybe not as much as Galway are doing it but all teams seem to be playing it so.

“We put a lot of effort into our own defensive duties this time round. I said to the boys we are conceding an average of 2-18 and if we concede 2-18 today we won’t win and we conceded 1-10 and I am delighted with that,” added Kearns who now leads Tipp to their first All-Ireland final since 1935, another feather in the cap of the well-travelled county manager.

Questioned on the so-called bonus territory Tipp now find themselves in, he replied...

“I know no one will give us a chance again but we have earned our right now to have a crack at them,” said Kearns.

“We saw Galway were playing a system and we felt that if we broke it down that they would have to come out to us and they did. And once they did we figured we would create more chances and get more chances. I am disappointed we didn't score more especially in the first half. I felt in the first half a three point game wasn’t a reflection of the first half and I keep going back to it with Tyrone, Kerry, Mayo, the teams that we are left with now they will punish you for that. They won’t let you back into it so we have lessons to learn and we have to keep learning . We are going in to an All-Ireland semi-final now and if we don’t learn quickly we will learn it the hard way outside on the pitch,”

“Listen, we haven’t got the biggest management team and the teams we are going up against we won’t have the management teams or the resources that they have. But what we have are very good.

“Dave Moriarty has done a great job on the physical aspect of it. As regards our injuries and what people don’t realise that is the fourth championship game in a row that we have put out the same 15. That’s phenomenal really.

“Ian Dowling, who played for Munster in rugby, he has got a really good way about him and he understands what it takes for players at this level and he is doing a great job. we couldn’t get our best team out on the field during the league, not even close to it.

“And Shane Stapleton has done a great job and Paul Fitzgerald and then we’ve got an excellent analysis team, and Brian Lacey, in Kildare, Brian has done an awful lot of work for us. Michael Burns is another man who does a great job as does Tommy Toomey. It’s a small tight-knit group but as I said we can’t compete with the resources of the teams we are now going to come up against, but we will compete, we have to,” added Kearns.

Next up for Tipp is Tyrone or Mayo on 21 August at HQ.

Kearns reflected: “I’ll be honest, I have to say, the winners of Mayo and Tyrone will be one of the favourites for the All-Ireland.

“I suppose, it’s only a personal opinion but I feel that Tyrone are very dangerous – and that’s no disrespect to Mayo.

“I’ve no doubt Mayo will give them loads of it next weekend.

“But let’s be honest, that’s a heavyweight clash – the winners of that will be overwhelming favourites to beat us.

“And I’m just delighted that we have three weeks to let this sink in and prepare ourselves.

“I could do with three months maybe! But three weeks is what we have and we’ll prepare as well as we can and hopefully we’ll be ready to give a good account of ourselves again.

“We’re not saying we’re going to win the All-Ireland, that’s not what we’re saying. But we are saying we’ve a decent team, we have decent footballers, and they deserve respect and credit for what they’ve done.”