Super cycling around the roads of South Tipperary 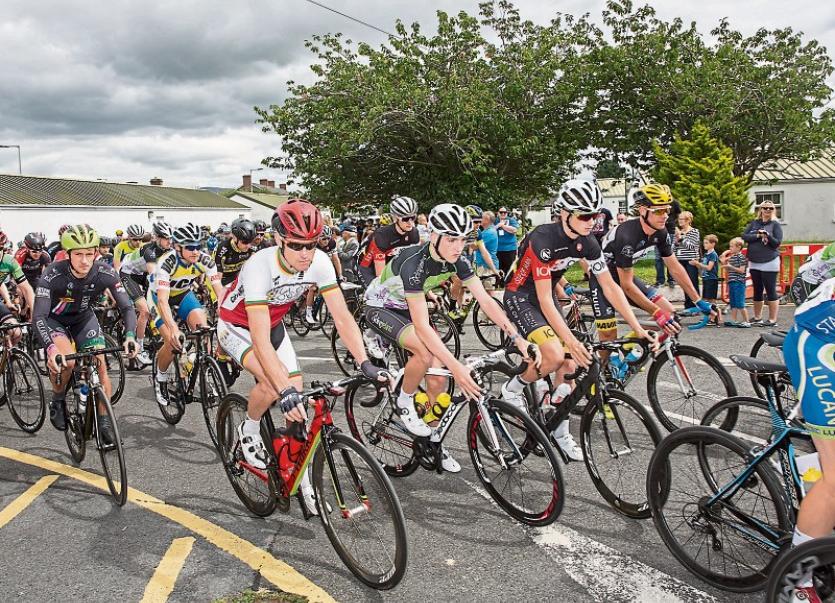 One of the best riders on the domestic scene in recent years, Ian Richardson of UCD Cycling Club took the final yellow jersey at the Suir Valley Three Day on Monday afternoon at the end of a rain soaked 115km final stage .

But Richardson had his homework done more diligently for the complicated run-in to the finish of the final stage in the wet and managed to win the overall prize.

Stephen Williams had taken the opening stage in Cahir on Saturday afternoon, winning the sprint from a group of four that decided matters after a thrilling 129-kilometre stage.

The first stage of the tenth edition of the race took the 170 riders to Mitchelstown, onto Fermoy, over the Vee from Lismore, down into Clogheen, Ballylooby and finishing in Cahir outside the Cahir House Hotel.

Entering Mitchelstown at the halfway point, a breakaway had formed that included eventual winner Williams and also Richardson. They had just over a minute but the gap gradually grew as the kilometres ticked down.

The gap was over a minute and a half hitting the base of the Vee – the day’s only category one climb – but a pedestrian pace by the bunch saw the gap swell to almost three minutes by the top. They were able to hold away the bunch coming to the line and it was Williams who had the fastest kick to take the stage win and the yellow jersey going into Sunday’s second stage with Richardson finishing third.

Stage two would see the riders tackle the ninety four kilometre route starting in Clonmel heading to Dungarvan, Lemybrien, Carrick on Suir and again back to Clonmel finishing on O’Connell Street - this route a favourite training spin of the great Sean Kelly.

The stage started at a blistering pace with an average speed reading 47km/h as the peloton descended into Master McGrath. The JLT Condor team of yellow jersey holder Williams felt attack was the best form of defence and drove the pace high going into Carrick on Suir and with no break getting away it looked to be a bunch sprint finish on O’Connell Street in front of the huge Clonmel crowd.

Disaster struck with fifteen kilometres remaining as a big crash took down the yellow jersey holder Williams but he just managed to get back into the main bunch to ensure he lost no time and hung onto the lead.

It was Richard Maes of Killarney Cycling Club who proved quickest to take the biggest win of his career at the end of the brutal and chaotic stage. The Kerry man avoided all the danger by staying right on the nose of the bunch and when he sensed the time was right he let fly for a truly brilliant win.

The stage three criterium around the streets of Clonmel promised to be a great spectacle for the huge crowds in attendance and it did not fail to disappoint with Ed Clemens from the Spirit Bikes Pro UK Team winning the stage after breaking away from a group of five that pulled out a 28-second advantage on the remnants of the bunch approaching the latter part of the 45 minutes plus three-lap affair.

His teammate Jake Hales was second across the line with Richardson of UCD taking an excellent fourth place. Also in that decisive five were the yellow jersey wearer Williams and his teammate and defending champion Ed Laverack, both riding for JLT-Condor.

The result meant the fight for the yellow jersey would come down to the wire on Monday’s final stage with 14 riders within a minute of the lead.

It was Darnell Moore from Caldwell Cycles and British rider Elliott Porter who lit up the race as they escaped going up the category one climb The Glen of Aherlow.

The duo managed to hold off the peloton approaching the finish in Clonmel and it looked to be a two man sprint up the finishing straight on Parnell Street.

That was until disaster struck for Moore as he crashed on the final bend leaving Porter to cross the line solo to take a fine stage win and also secure the King of the Mountains Jersey.

But Moore’s mishap was not the only drama on the final run in as the yellow jersey of Stevie Williams went the wrong way at a roundabout 4km from the finish, which gave Richardson his springboard to attack.

Behind him, Williams crashed as he quickly tried to correct his mishap and while he was quickly back on his bike Richardson had already hit the afterburners and Williams JLT Condor teammates couldn’t bring him back.

He had checked the course out well in advance of the stage; clearly determined to put in a big attack looking to win the race outright with final few kilometres littered with corners.

Once off the front, Richardson’s big engine was in overdrive as he pressed for home and in the end having gone into the stage five seconds down in second place overall, he would win the Suir Valley title by a slender seven seconds.

Moore was very deservingly awarded the Most Aggressive Rider jersey at the end of the day after his final stage exploits came cruelly undone on the final bend.

The TG4 cameras were in town in Clonmel over the weekend and the race highlights can be seen on TG4 next week.

The increased quality of riders coming every year to the Suir Valley Three Day just shows how big a profile the race has both nationally and internationally. It is now the second biggest race in the country behind the An Post Ràs and this year’s tenth edition proved to be one of the best yet and the eleventh edition next year promises to be even bigger and better.