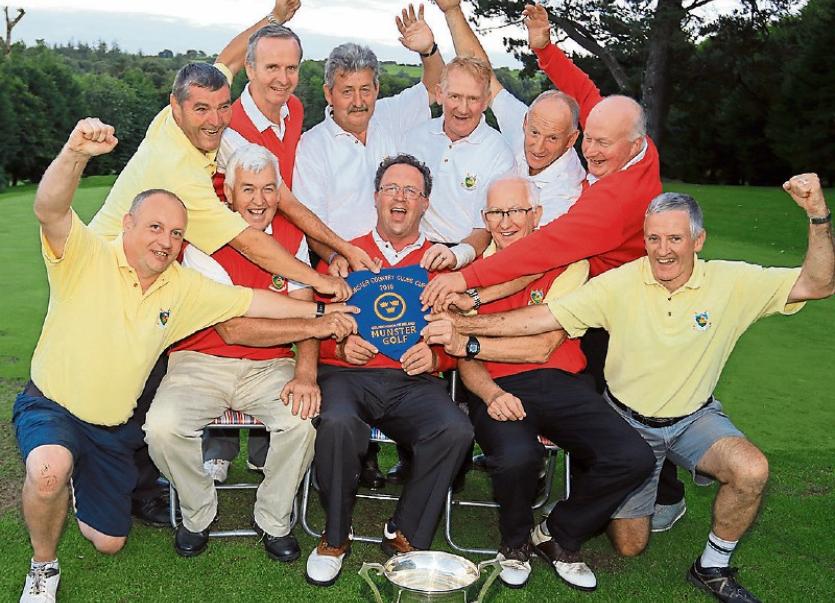 Pride of place this week goes to the Templemore Country Clubs team who are once again Munster Champions after thrilling victories on Sunday over Lisselan and Lismore at Lisselan on the outskirts of Clonakilty.

After the practice round early in the week expectations were not high with the view that it was a compact course with difficult greens and also the fact we were meeting the home club in the semifinal.

Undaunted and with more hope than expectation, the manager and panel set off at dawn and following a pit stop in Cork arrived in Lisselan to find the course set up as difficult as it could be and the greens on par with Augusta - probably 10 on the stint meter if we had one,

Ken Browne would have difficulty even standing on them - he might slide off not to mention putting. Even the locals said it was never as difficult a set up even for a Captain's Prize.

This was further borne out by the fact that of the 28 players playing the first hole, a 128 yards par 3, there were only two pars recorded with matches being won with 5's. Due to the difficulties, the two semifinals progressed slowly with Templemore emerging as winners of their semi 5 & 2 and Lismore defeating Ballyheigue on the 20th.

Teeing off in the final at 4 o clock, in changing conditions, all the matches were nip and tuck and after the front 9 things were finely balanced, and even with 3 holes to play, all matches were alive.

After 2 good drives the Lismore player placed a great second on the green 12 feet below the pin, but our hero of the moment Joe O Connor fried his shot straight at the flag to within a foot.

Lismore conceded the putt for a great birdie and their birdie attempt slid past the hole for a memorable victory.