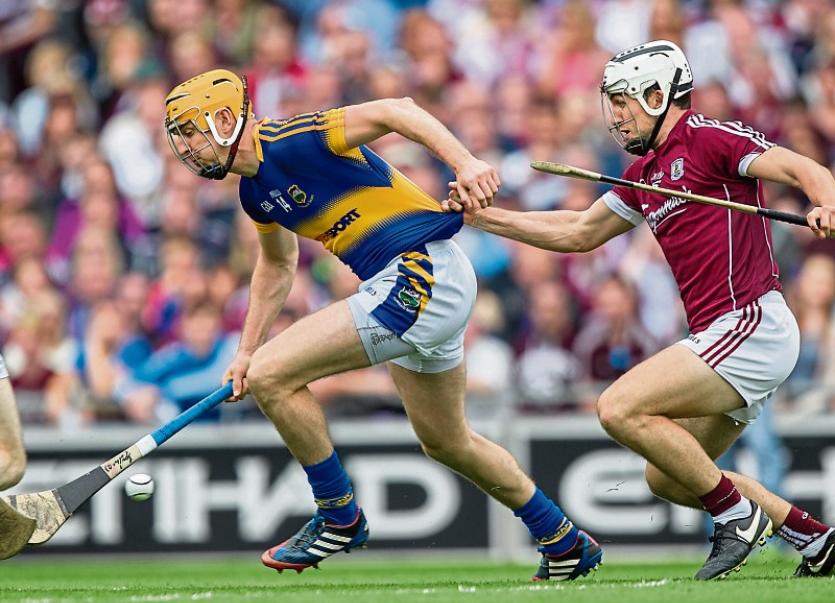 This was a victory to savour, one achieved in the type of frantic scrap from which Tipp have emerged second best all too often.

In the past three years all of their eight exits from the knockout stages of either the All-Ireland or Munster Championships or National League have come by a margin of three points or less.

But this time there was no narrow defeat to mull over, as they gained revenge on Galway for last year's defeat at the same stage of the championship with a one-point win in Sunday's All-Ireland Senior Hurling Championship semi-final in front of an attendance of 54,227 at Croke Park.

It means that Tipp have now qualified for their fifth All-Ireland Hurling Final in the past eight years. And as was the case for those previous four deciders, their nemesis Kilkenny will again provide the opposition on the first Sunday of September.

They had clung onto the coat tails of a dogged Galway team for much of the game but Tipp came good when it mattered most, scoring 2-1 in the last 15 minutes to put themselves in a winning position, and then hanging on for the win in those nervy closing moments.

Galway's aggression had caused Tipp all sorts of bother all afternoon and with 11 minutes remaining a Conor Cooney free put The Tribesmen two ahead.

Then it was a case of cometh the hour, cometh the man. A minute after he shot wide under pressure John "Bubbles" O'Dwyer, on as a substitute, collected John McGrath's clever pass and scored a delightful goal from a narrow angle nine minutes from the end of normal time.

The goal was a thing of beauty, the Killenaule player supplying a skilful finish that few other players could match in its exquisite execution.

A Conor Cooney point a minute later had the teams level for the ninth and final time but within a minute Tipp put themselves in pole position for the first time with their second goal. Bonner Maher dug out possession, Seamus Callanan played a sumptuous flick to John McGrath and the young Loughmore player did the necessary.

Galway kept probing and points from Conor Cooney's free and sub Shane Maloney (who scored the winning point in the game last year) ensured the outcome remained on a knife edge to the final whistle.

However Tipp continued to work hard to preserve their fragile lead. For a change they got the breaks - especially when Galway sub David Collins allowed the ball to run out over the line with time almost up - and their relief and joy at the final whistle was palpable.

This was a very different sort of performance from the freewheeling displays that had seen them breeze through the Munster Championship. Many of the players' touch was poor and misplaced passes were commonplace, deficiencies in their game that led directly to both of Galway's goals.

For the first, after seven minutes, Niall O'Meara failed in a few attempts to gather possession near the sideline, Johnny Coen sprinted clear and laid on the assist for Conor Cooney to shoot past Darren Gleeson.

Seven minutes of the second half had also elapsed when Brendan Maher gave the ball to Galway's Joseph Cooney when he tried to play a return pass to Seamus Kennedy, and with Cathal Barrett having drifted out of position the Galway man raced clear to bury a shot in the net.

However the Tipp captain recovered well from what could have been a fatal error, as he continued to provide his customary inspiration and leadership from the middle of the field.

That Tipp eventually ground out this victory was largely due to the industry of Patrick Bonner Maher, their best player on view on Sunday. The Lorrha player often runs into cul-de-sacs and his scoring rate is poor but he's an invaluable presence for his sheer hard graft from start to finish. The Bonner was again irrepressible and it was a surprise that he never even earned a nomination alongside team mates Padraic Maher and James Barry for The Sunday Game's man of the match, an award won by outstanding Galway midfielder David Burke.

Bonner played a key role in the build-up to John McGrath's goal and had a hand in the creation of three points. And when Johnny Coen tried to launch a late attack the Bonner was prowling with a hook to deny him possession.

Elsewhere Dan McCormack was another willing worker, while Noel McGrath weighed in with three points and was desperately unlucky with that 10th minute shot that smacked off the crossbar. Seamus Callanan, the star of last year's game, was heavily marked by Daithí Burke,among others. While he didn't score from play the Drom/Inch player was always a distraction and he set up John McGrath's crucial goal.

The younger McGrath was always heavily involved and produced a clinical finish for his goal but he should have had another five minutes into the second half when Galway goalie Colm Callanan blocked his close-range effort.

Michael Breen's stock continued to rise with another solid performance in midfield, during which he scored three points from play. The half back line of Seamus Kennedy and the two Mahers, Padraic and Ronan were steady hands on the tiller, while James Barry was the best of a full back line in which Cathal Barrett and Michael Cahill didn't enjoy the most comfortable of afternoons.

Before the start the public address system pumped out Queen and David Bowie's 'Under Pressure' and that's exactly the situation Tipp found themselves in when Conor Cooney buried that early goal.

A string of points was an encouraging response to the goal in what was an open if scrappy affair played on an overcast afternoon. Padraic Maher bundled Joe Canning over the sideline and then came to his team's rescue three minutes before half-time with an important hook on Conor Cooney, just as the Galway man was about to pull the trigger. Galway, though, had the bit between their teeth as half time loomed - having outscored Tipp by 0-7 to 0-2 in the last 20 minutes of the first half - and Tipp were fortunate to be only two points adrift (1-10 to 0-11) at the midway stage.

Despite the injury-enforced departures of influential Galway duo Joe Canning and Adrian Tuohy at the interval, Tipp still struggled to get into a rhythm after the break, although they were possibly still rusty after the five-week lay-off since the Munster Final.

However they stuck admirably to the task. There were many times throughout the seventy minutes when their supporters would have gladly accepted a draw but their team's reward, eventually, was a considerable upgrade on a share of the spoils.

A marked upgrade on this performance will be required too when they take on Kilkenny in the final on Sunday fortnight.