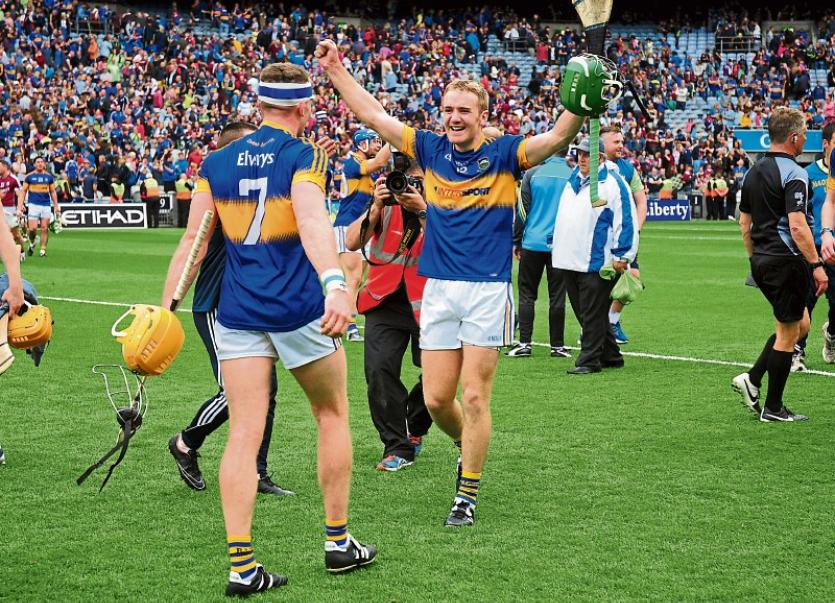 Padraic Maher was involved in two of the most pivotal moments of the first half of Sunday's All-Ireland Senior Hurling Championship semi-final.

First there was the thundering but legitimate shoulder challenge against Joe Canning on the sideline on the Hogan Stand side of the pitch after 23 minutes, a tackle that forced both players to leave the pitch for treatment; and then the hook on Conor Cooney four minutes before half-time that prevented the Galway player from getting a shot on goal when he had only 'keeper Darren Gleeson to beat.

On the collision with Joe Canning, the Tipp wing back said "it was just kind of a spur of the moment thing.Thankfully I think we're both okay".

He was nursing a couple of stitches in a head wound after the incident but said it was "fine".

He said the vital intervention against Conor Cooney was "just a case of everybody working hard and covering one another, and thankfully I got back just in time. I think there were 31 or 32 minutes on the clock on that stage, so if that had gone in it would have been a sucker punch before half time".

The Thurles Sarsfields player said he was absolutely delighted with the win, especially after last year's defeat at the same stage by the same opponents.

"I suppose performance-wise we probably didn't give the performance we were looking for. But on the upside we worked very hard and we ground it out, which was great, to get another crack at a final.

In fairness to (referee) Barry Kelly he let the thing go on various occasions, especially in the first half. It was thoroughly enjoyable to play in and I presume it was very enjoyable to watch as well.

There's plenty of room for improvement but we're in the final, that's the main thing.

We probably lost a few tight games and it's great to come out on the right side of it.

The championship is really after hotting up in the last two or three weeks, so we're absolutely delighted to make that step to the final".

He paid tribute to the forwards for their contribution to the win.

"The boys stayed working hard inside, especially for the second goal, they worked it very well, the passing, they're well capable of that. The likes of Dan (McCormack) and Bonner (Maher) showed an unbelievable workrate, winning vital frees at times,

Seamus (Callanan) got us a few frees to keep us ticking over when we weren't going that well and that kept us in the game and kept us in touch, and thankfully we got there.

Having Bubbles coming on was a great asset too, he showed what he's good at. He was hungry, he was very disappointed not to have got back in, so he's after putting his hand up (for a place in the team) for the the next day.

It was a good test and please God it will stand us in good stead for the final".

Had the five weeks break since the Munster Final and the easy victory over Waterford in the provincial final made preparations for the All-Ireland semi-final more difficult?

"After last year we maybe came into the semi-final a bit stale, but we trained hard for the last number of weeks and that was tailored down for the last week. That hard work got us over the line there today, hopefully the game will stand to us.

Kilkenny never had any bother with the five weeks or four-week gap over the last number of years, so we couldn't use that as an excuse and we weren't going to.

Kilkenny had showed a tremendous effort to get through their semi-final against Waterford, that's no surprise, that just goes to show that Waterford are there or thereabouts too.

That's going to bring on Kilkenny a nice bit and hopefully that game today will bring us on as well.

We needed that good game as well".

The final now pits them against a team who Tipp have failed to beat in the championship in five attempts since their famous All-Ireland Final win in 2010.

"We're struggling to get over the line for the last number of years against Kilkenny so it's up to us now to turn the tables", says Padraic Maher.

"We're under no illusions, we know each other inside out at this stage, so we know we have to work even harder than today and bring a performance with that and see where it leaves us.

People had doubted them for the last few years but they just keep coming and coming.

You saw them last night (in the semi-final replay against Waterford), bringing in new lads again and delivering the goods again.

We're under no illusions, we've a load of new young lads in there too and they're mad for action too. That will bring them on a huge amount again today.

It has the makings of a cracking final, both teams are going full steam ahead after the semi-finals.

We'll get our recovery in tomorrow evening and we'll be back on the field on Tuesday night, so we'll see where that leaves us".