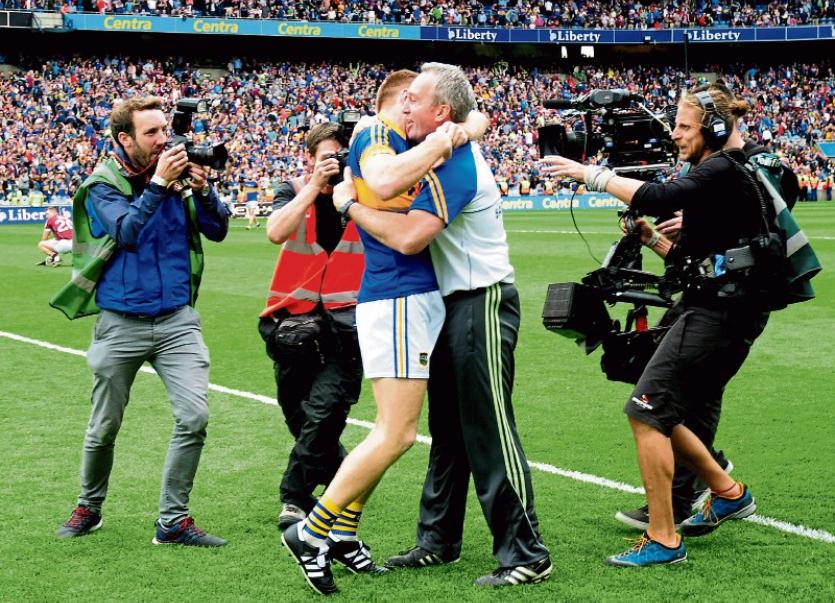 While there was an overwhelming feeling of relief when the final whistle sounded in Sunday's All-Ireland senior hurling semi-final, there was also unanimity on the part of the victors that more would be needed if they are to be accompanied by a special guest on the bus home from the All-Ireland Final.

The Liam McCarthy Cup is within Tipperary's grasp right now, but Kilkenny's hold on their title will not be relinquished without one almighty battle. A performance like last Sunday's will not be sufficient to loosen the Cats hold on the famous silverware.

“Hopefully that will bring us on too for the final. It is up to us now to turn the tables on Kilkenny. We are under no illusions because we know each other inside out at this stage. We just have to work harder again and see where it leads us. We don't ever fear Kilkenny - we never did. We have come up against them very often and eventhough people might be doubting them, they just keep coming again and again bringing in new lads and delivering. But we have a few new lads who will benefit from having played too and it will bring them on and help us in the final,” Padraic Maher said after he had received stitches above his right eye.

His manager agreed with his assessment - “We set our sights now for three weeks time. We will have to find a level of intensity which will need to be far more consistent than what we showed out there today. At times it was up there but not consistently so - that's the challenge because we are playing the masters of intensity. That's something we will have to work on over the next few weeks,” Michael Ryan said.

In saying that, there was also an acknowledgement by all and sundry that Tipperary had managed to win a very tight game - the kind of game that have been lost so often in the past. That in itself is a major bonus and the players knew it.

“We have lost a few tight games and it's great to come out the right side of one now. The championship has really heated up over the last few weeks. It was like a game of tennis for a while but the lads worked very hard and worked the second goal very well. The likes of Dan and Bonner showed unbelievable workrate and Seamus got a few frees to keep us ticking over and keep us in touch. After what happened last year we are just delighted to get out of here today, albeit with plenty of room for improvement,” said Padraic Maher who was praised highly for his goal-saving hook just before half time.

Michael Ryan added, “We are thrilled. A semi-final has no silverware but in a sense it has a lot more in that you reach hurlings Holy Grail. We are there - it wasn't pretty, but what a battle. A great kind of game to win - I think it is an important win. I wouldn't underestimate it because it has been well documented that we have struggled to win that kind of game. Whether you like it or not, that is the fact, so to turn one around and win a tight one is nice. But for the fact that we had a good strong bench to come in make vital contributions, we would have been in trouble,” said the Upperchurch Drombane man.

Michael Breen too was along the same lines when it came to the enormity of the victory, “ It has been said that we die down in tight games, but not this year. We have built that mental toughness through the league and into the championship. We are coming right but we don't underestimate the challenge that lies ahead,” he said.

Many people focused on Padraic Maher's bone crunching tackle on Joe Canning which shook the Hogan Stand itself - it was one of the biggest hits of the championship and it rattled Big Joe who ended up leaving the field just before half time with a hamstring injury.

“It was a spur of the moment kind of thing but thankfully we are both OK. You always get a physical game with Galway and they got a few big hits on us as well. In fairness to Barry Kelly, he let things go on various occasions especially in the first half. It was thoroughly enjoyable to play in and I presume to watch as well,” he said.

Michael Ryan had concernes about Tipp not getting to the pace of the game as quickly as Galway did - the five week hiatus perhaps playing it's part. But, he was thrilled to have quality subs to call on and none better than John Bubbles O'Dwyer who scored a superb goal .

“Bubbles is hugely talented. But it wasn't just him, it is collective. It was so obvious that it meant so much to both groups and we are just so delighted that we are at the right end of the results. If the game had gone on another two minutes it could have ebbed and flowed and we could have been at the wrong end of a one point game again,” he mused.

But, it didn't go on. Tipp had done enough and if they were to win their next game by a point also, there would be wild celebrations throughout The Premier County. The stakes are high but so too are the hopes of Tipp people everywhere.