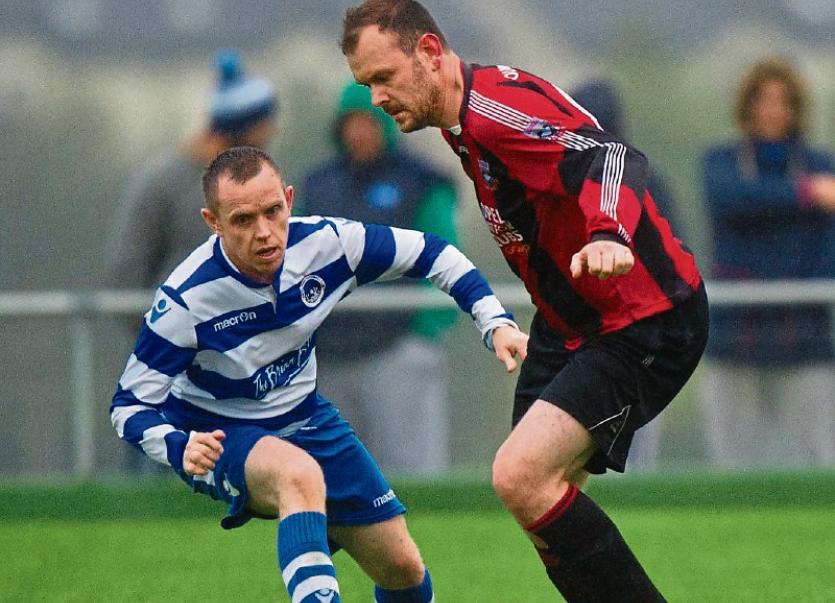 Another season another good start for the TSDL champions as St. Michael’s took the three points on Saturday evening against a spirited Peake Villa team who promise big things this season after an excellent second half of last year’s campaign.

And they showed that they have a huge hunger to do well when they took the lead in this game after only nine minutes. What looked like a routine clearance from Aaron Wall was blocked down bravely by Michael Mc Kevitt and he stroked the ball home to an empty net.

They almost doubled the advantage minutes later from a corner as they rocked the home side, but eventually Saints settled and got back in the game in the 24th minute when Chris Higgins scored from close range after Paul Breen had knocked down a Russell Quirke corner.

Firing on all cylinders now, the home side took the lead four minutes later with a goal from David Grincell who profited from good work by Colin Bargary and David Slattery. It looked like this was going to be it before the break, but right on the stroke of half time, Breen got his first of the season when he headed in a corner kick to give his side a two goal cushion.

This knocked the visitors but they continued to battle away for the second half. The Thurles side moved Alan Leahy to centre half which solidified their defence and by switching Darren Maguire to the forward line they caused the Saints some anxious moments up front. They were very unlucky 20 minutes from time to have a goal disallowed and this was their last real chance.

St. Michael’s for their part had some other chances notably through Grincell and Slattery but were unable to add to their tally. They did hold out to collect all three points though, and will be happy with another winning start to their title defence.

Tipperary Town made their debut at the highest level in the TSDL with a win away to Two Mile Borris and gave a performance which bodes well for their season ahead.

The home side started the better as the newcomers were tentative, and took the lead after 15 minutes when they were awarded a penalty which was dispatched to the net by Kieran Hennessy.

This knocked the visitors back over the next quarter of an hour and the home side were unlucky not to add to their lead, but gradually Town fought back and drew level when a Brian Jones header fell into the path of Stephen Quinn and he had the honour of hitting Town’s historic first ever Premier League goal.

Both teams went hard looking for the breakthrough second goal in the second half with neither being able to convert their chances. Town finally secured the win however after a mix up in the Borris defence lead to giving away a penalty kick and Barry O’Dwyer stepped up to fire the ball home, 20 minutes from the end.

Galbally United found out what it was like back at the sharp end of Premier League football when they watched a hungry Clonmel Town team come from behind to eventually secure an easy win on Saturday evening. Fresh from winning the First Division title the home side started well and went a goal up inside the first ten minutes when Conor Henebry struck from inside the box to give his side the lead.

Things got even better for the home side minutes later when evergreen Quinn Perry added a second.

Unfortunately though United had little time to rest on their laurels and within a minute conceded a penalty kick to the visitors. After their difficulties from 12 yards last week there may have been a hint of trepidation but Paul Shanahan stood up and fired the ball home to get his side back into the game.

After that the first half ebbed and flowed with no more goals, but the visitors showed how clinical they are when they opened the scoring two minutes into the second half with a goal from Tony Scully to draw the teams level.

This was how it stayed until the hour mark when pressure from the Clonmel side finally told and they took a lead with a goal from David McGrath. Minutes later that advantage was doubled when Keith Cashman fired home, and they made absolutely sure of the points when Aidan McGrath opened his account for the season two minutes from the end.

A wind lashed Palmershill witnessed Cashel Town’s opening game of the new season, and the result wasn’t much better for them as they went down to a well drilled Old Bridge side.

The home side started on the front foot but looked like they lacked match sharpness as they squandered whatever chances they managed to carve out. They were punished for their wastefulness when the Bridge took advantage of some sloppy defending to fire ahead three minutes before the break with a goal from Martin Kennedy.

This stung the home side, and they continued their dominance in the second period. However, goals win games and Old Bridge put on a stout defensive display to ensure the points headed back to Clonmel.