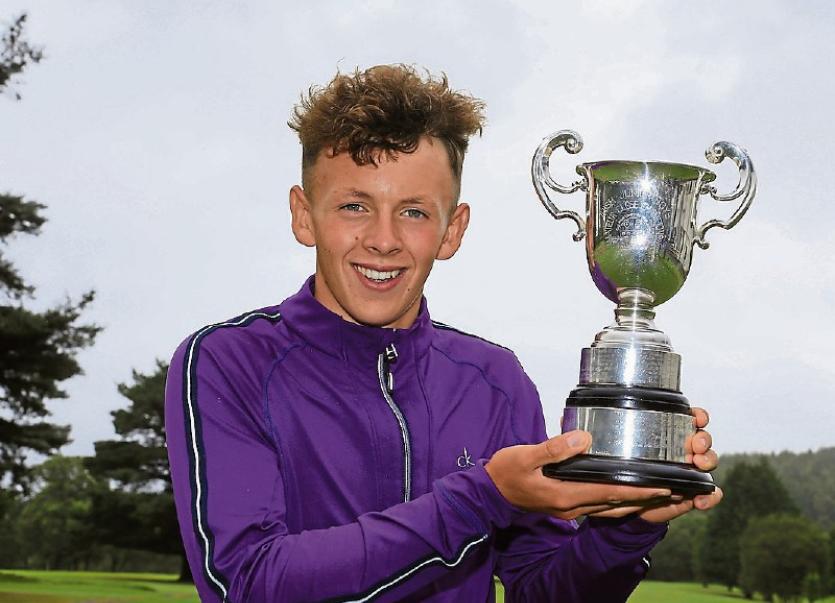 The three-day competition which started on Wednesday was blessed for the most part with decent weather up to its conclusion on Friday.

Highlight of the week was Brady’s course record equalling seven under par 64 on the Thursday which propelled him past overnight leader, Mark Power of Kilkenny, into a two-shot lead. The record was set last year at the Munster Under 16 Open by 16 year-old Spaniard Eduard Rausaud (whose card on the day was coincidentally marked by none other than John Brady)

Brady, who only sat his Junior Cert in June, birdied two of the first four holes on the final day to increase his advantage and could afford the luxury of a couple of dropped shots on the way home to post a 70 and finish the week at Clonmel at nine under par.

The top finishers were:

Speaking after the event John Fennessy, Munster Golf Union of Ireland Council member, couldn’t say enough about how successful the week had been at the Clonmel club.

“This was as good as, and as well run, as any golf tournament I have been involved with, and the Golf Union of Ireland were absolutely delighted with every aspect of the week. From the course itself, to the efforts of the local club members, to the hospitality, to the catering. It was absolutely excellent,” added John, who was the main driving force behind securing the event in the first instance for his home town club.

“The local members didn’t just give 100%, they gave 200%, in their efforts over the week and they all rolled up their sleeves to greatly add to how well the whole event passed off. They were a great source of pride and they certainly made Clonmel Golf Club very proud,” he added .

“We were blessed with the weather. On the final day (Friday) it was bucketing down at 7 o’clock that morning but it cleared before play and stayed away until just after the presentation at the end of the day. We we very lucky in that regard.

“The course itself stood up very well. We had the Irish Junior Foursomes on the Tuesday which Belvoir Park won and then three days of the Irish Under 16 Boys Championship. Great credit to the greenkeeping staff at Clonmel who do an excellent job always on what perhaps is not the easiest terrain in the world to work on. But full credit to Frank Nugent and staff, the course was in magnificent condition. They deserved to be recognised also,” added John.

“But every single person played their part in the success of the week and the GUI were ‘over the moon’ with Clonmel Golf’s Club staging of the event,” concluded John.