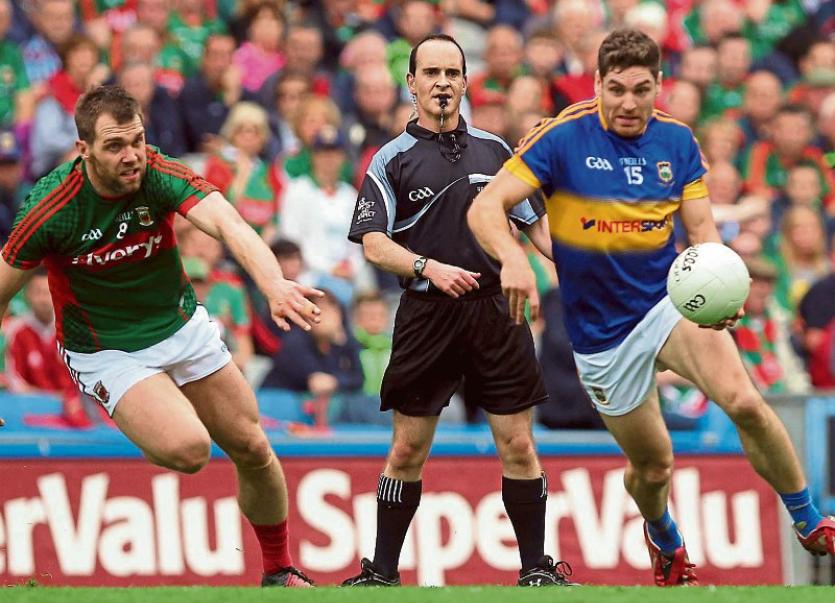 Leaving Croke Park on Sunday evening having lost the All-Ireland senior football semi-final by five points was a curious experience. On the one hand, you were left pondering the what-might-have-been had Robbie Kiely stayed on the field, had we not given away two soft goals, had we taken the chances and not had a red card etc. etc.

On the other hand, there was a feeling of huge pride in the team and what they have achieved this year. Remember, it was only back in May when we wondered if Tipperary would be able to come out of Fraher Field in Dungarvan with a win over Waterford - now, here they were running one of the super powers of the game to the wire in an All-Ireland semi-final having dismissed Cork, Derry and Galway along the way.

The game was lost in ten minutes before half time when Mayo hit Tipp for 1-7 against 0-1. The goal came from a series of errors, but there was no doubting the power, pace and prowess of the Connacht men when they got on top in that period. They rampaged over Tipp and should probably have had a bigger lead by the break.

Tipp though, did what they have always done. They displayed that stubborn thickness which saw them face up the challenge and say 'take that' to the Mayo lads. They didn't like it either mind and while it was hard to see Tipp actually winning the game, there was certainly enough evidence to suggest that they could ..... up until that unfortunate goal was scored by Colin O'Shea on the spin - he put it in about the only place that Evan Comerford could not get to.

It was the end of the contest, but this must not be an end for Tipp. For 2016 to mean anything, this must be another beginning and a chance to cast the net out again and see what can be caught. For instance there is no mid man in the squad at all - surely there are some who could make a difference to the panel. Commit lads and give it a go - what is there to lose?

It was refreshing to hear Conor Sweeney and Liam Kearns stating that next year cannot come soon enough - the appetite for more is there now and Sweeney even spoke about the door being open for anyone to jump on-board. Kearns hinted at there needing to be a change in mindset and looked forward to sitting down with the Football Board and the County Board to help bring about that change.

They say football and hurling cannot co-exist and dual players cannot be accommodated. Liam Cahill would state that Tipp's minor hurlers are back in the All-Ireland Final and tipped to win out, because he has had the players without the distraction of football. Distraction or not, the minor hurlers were in the exact same position last year, as were the minor footballers. But, did the dual issue result in Tipp winning either title? Don't think so - Galway were just better in the hurling and Kerry were far superior in the football.

This year we have the Tipp senior hurlers and footballers in the All-Ireland semi-final without dual players - will Tipp have a better chance of winning the hurling without having to cope with dual players? - don't think so. But, what a difference Seamus Kennedy and Steven O'Brien could have made to the footballers. It was sad to see O'Brien walking in with the crowd to Croke Park when he should have been on the bus - especially since he has little prospect of being in the 26 for the All-Ireland.

The arguments on both counts are many and no doubt will be thrashed out in due course. For now though, let us give great credit to Tipperary who in the words of their Manager 'didn't try to change the face of football but just tried to play it the way it should be played.'

Their big challenge now will be to get out of division 3 of the Allianz National Football league, and to try and get back to the provincial final.

I wonder has anybody else been as annoyed at watching the Sunday Game in recent times, especially when it comes to Tipperary games. The All-Ireland semi-final analysis provided on the Sunday evening show featured Tomas Mulcahy and Ger Loughnane. Now, I know punditry is all about opinion and all that, but really the analysis provided was shambolic, simplistic and well, just a load of rubbish. Granted it's a very quick snapshot of the game, but come on.....

Take Ger Loughnanes comments on John McGrath's missed goal chance - he should have buried it, said the great one from Clare; should have broken the goalkeepers tackle and scored. Really? McGrath had just caught the ball over the full back, turned and managed to get a shot off only to see the ball come off the keepers outstretched leg and hurley. He did brilliantly to shoot in the first place.

Then, we had the list of achievements of Galway teams presented in the All-Ireland Club championship, the All-Ireland U-21 and minor championships, contrasted with the senior teams success. "I just don't know why they can't bring that success through to senior," Loughnane said. Tomas Muclahy said what everyone else was thinking - "Sure, you were there for two years Ger as Manager yourself," he smirked, to which he got the evil eye from Loughnane, while Michael Lyster could hardly contain his smile. The man with all the answers had no answer.

He also was very critical of Cathal Barrett for Galway's second goal saying that he was completely out of position and allowed Galway in for an easy goal. He seemed to have ignored the fact that the ball was given away by Tipp - not Barrett, who was making himself available to take the pass in a more advanced position. It was a lazy assessment from a pundit who is becoming more and more tiring with every appearance.

To make matters worse, they chose David Burke as Man of the Match - yes, he had a fine game and was probably deserving of the accolade. But, the two clips they showed to illustrate his contribution featured him being blocked down in one, and losing possession in another.

Hurling punditry has moved on from the Loughnane's and Mulcahy's of these days - probably even the Cyril Farrells too eventhough he speaks more sense. Then you have Donal O'Grady watching from pitchside with a few comment thrown in here and there - you could take him or leave him as well. There is far more detailed and insightful analysis from the likes of Donal Og Cusack when he was there, our own Brendan Cummins and sometimes Eddie Brennan although he just cannot help his 'Kilkennyness' seeping out. But, if you want brilliant analysis - try Toome's Tommy Dunne in 'The 42' - superb.

Thinking about it though, perhaps the jaded analysts are stating the obvious for the benefit of those who know little about hurling, rather than trying to convince those who do known something that they have the answers. Curious thought I know, but other than thinking that they are spoofing it or winging it, I can't come up with any other answer.

The Sunday Game holds a special place in the heart of GAA people, but it needs a shake up and fast. Curiously, the football analysts are far more in tune than their hurling counterparts.