Clonmel Celtic too hot for Peake Villa in Premier League 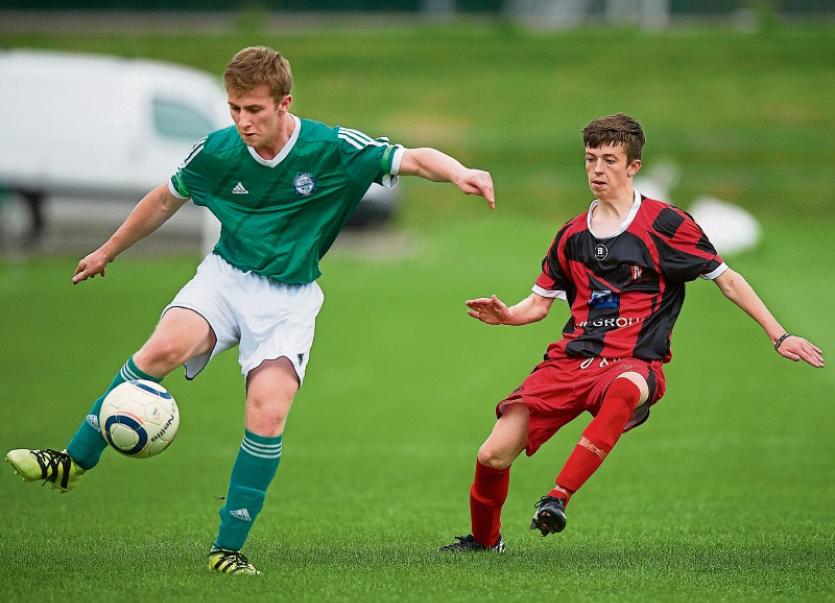 Reigning champions St Michael’s took apart a very young and inexperienced Cashel Town team and continued their winning start to the season during the week.

It only took nine minutes for the home side to take the lead when Mark Hoban fired home, and a brace of goals by Ryan Deere in the first half gave his team a healthy half time lead.

The second half turned into a rout as the home side went through the gears, with Deere completing his hat-trick on the hour mark. Although Cashel’s James Harding tested the home keeper on a couple of occasions, Mark Hoban, David Slattery Michael Ryan and Deere with his fourth made it as easy win for the Saints.

This was an early season local derby with both sides licking their wounds after defeats in their opening games, making a result here of importance to get their season up and running.

In the end it was the home side that took the points after a well contested game. It was a defensive error which led to the first goal however as Borris’ Jamie Meaney capitalised to put his side in front, and they held that lead to the break.

Villa finally got level in the second period when Dale Loughnane was brought down in the area and Pippy Carroll fired the resultant penalty to the net. They then went on to secure the points 25 minutes from the end when a quick attack started in their own penalty box eventually found Matty McKevitt to fire home.

Three games into the new league it’s almost looking ominous for anyone challenging the Saints as they recorded their third win of the week with another dismantling of a fellow Premier League side.

The first goal came eight minutes into the game when a John O’Brien throw into the Bridge area caused all sorts of confusion and a defender put the ball into his own net. It didn’t deter the Bridge though and they fought back being unlucky not to level matters in the 25th minute after Stephen Kearns headed just over. It perhaps led them into a false lull though, because with ten minutes to go before the break Ryan Deere scored his fifth goal in two games finishing a fine passing movement, and when John O’Brien curled home the third on the stroke of half time, the game was effectively ended as a contest.

The second half was a tamer affair played out in lovely Summer weather and it took until 12 minutes before the end before the score changed again, this time when David Slattery finished from close in to preserve and even enhance his sides start to the new year of football.

Celtic midfielder David Joyce opened the scoring in the 23rd minute and boosted by the breakthrough Celtic continued to push forward and got a vital second just before half time with a sweetly struck half volley from debutant Darren Sweeney.

The visitors were back in the game two minutes into the second period when they created a one on one situation and although Brian Sweeney initially saved Villa scored from the rebound and were back in the game. Darren Sweeney restored Celtic's two goal lead when he finished calmly after he was played in by Darren Burns.

Celtic were solid and relatively comfortable for the final 25 minutes with Ross Condon, Seanie O'Hara and Darren Sweeney all coming close late on.

Newly promoted Tipperary Town maintained their unbeaten start to the Premier League season as they were involved in their second high scoring game in a week, again securing a point after a six goal thriller on Palmershill.

Cashel opened the scoring with a well taken effort by Robert Doherty in the 24th minute. The visitors responded well and were level ten minutes later when Russell Bowes finished a well-crafted move, before things got even better in the 36th minute after a neat header from Mark Roche put the Tipperary town side a goal in front.

It was Cashel’s turn to respond now, and they did so minutes before the break with James Harding’s first goal of the season.

In the second half Darragh Coughlan’s speculative free kick deceived all including the Cashel keeper to nestle in the back of the home net. This looked like being the winner until four minutes from time, when Harding again showed his undoubted class by striking a venomous shot to the net and ensuring a share of the spoils for both sides.

While the visitors maintained their perfect start to the new season, the home side finished Sunday afternoon as the only side in the Premier League who are pointless. The Clonmel side asserted their dominance from the very beginning and opened the scoring in their first real attack of the game after only two minutes when Jason Hahessy found himself in the area and he slotted home coolly. The game settled down after that with neither side really creating a lot until just when Borris felt they had weathered the storm, Town hit a second right on the stroke of half time when Paul Shanahan fired home to leave the hosts with a mountain to climb.

Things did get better for the home side and they were thrown a lifeline in the game when they pulled a goal back on the hour mark with an effort by Loran O’Toole, but any hopes of securing anything from this game were dashed when the visitors got their third of the game five minutes from time with an Adrian Cleere goal.