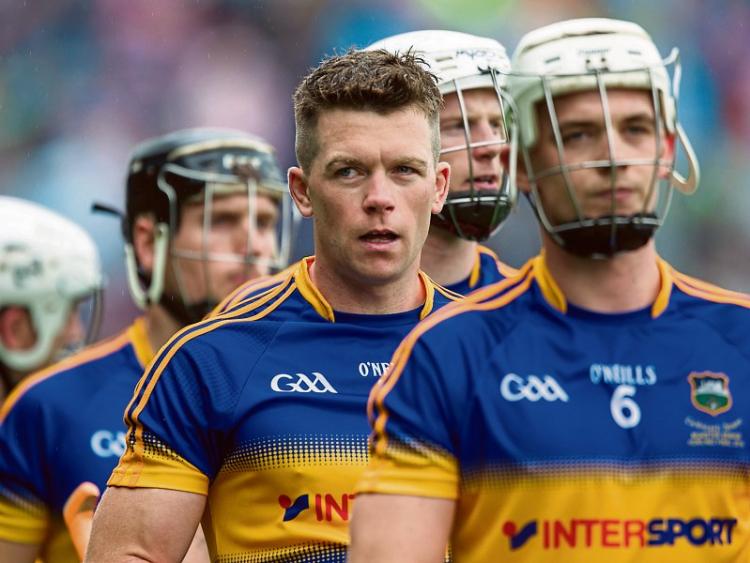 That's Padraic Maher's record in All-Ireland Senior Hurling Finals and it's one that he's aiming to improve upon when Tipperary face Kilkenny - the team he's played in all five finals - in Sunday's decider.

2010, the year of his only success, was a season of double delight when he captained his county to All-Ireland U-21 honours six days after the senior victory.

But he never imagined another six years would pass without lifting the McCarthy Cup.

“If you asked me that week I would have said that wouldn’t happen but it has”, says the Thurles Sarsfields defender.

“We have taken a lot of hits along the way. We have gained a lot of experience too. Our panel is still fairly young, we are nearly the older lads on the panel. Bar two or three lads out of the 36-man panel most are about 26-27 years of age. So we are still relatively young but we have a lot of experience.

We have been in this position before, we are preparing for a fifth final against Kilkenny. We have only come out the right side once so we have to find something different this time round to get over the line because we were close the last time (two years ago), a puck of the ball. But Kilkenny have always been on the right side of that puck of the ball”.

27 year-old Maher, who has scored 10 points in his 36 championship appearances, is acutely aware of the level of expectation in the county.

“Tipperary hurling people expect to win the Liam McCarthy every year and we as players, that is our aim every year as well.

Obviously when you don’t win it or you put in a performance like we did against Galway last year and lose you are going to get a bit of criticism. At this stage of our lives we are able to take that bit of criticism on the chin and move on. We have gained a lot of experience from it over the years.

We have nothing against people being demanding, because we expect it ourselves as players as we believe we have the talent to do that.

It’s great that there is a bit of a buzz there at the moment but that buzz will only last if we bring back Liam MacCarthy and that is our full focus”.

When asked which of the three All-Ireland Finals defeats by Kilkenny hurt the most, he says “They were all tough to take to be honest.

Obviously the first one (2009) stands out as it was my first final in my first year. We were so close to it but they all hurt so much.

The qualifier defeat in Nowlan Park in 2013 hurt as much as any of them so it's about time we start talking about the games we have won”.

He has scored a point from play in each of the team's four championship games on their unbeaten run this season.

"At centre back you have to anchor the defence and hold the shape, where at wing back - I won’t say it is gone like football - but Mick (Ryan the manager) lets us go with a bit of freedom. If there is a gap open for you he’d say to take it. It’s a very enjoyable way to play it.

Wing forwards in a lot of teams now work back the field and as a wing back you go a certain distance with them and if you get the opportunity then... Dan (McCormack) has thrown out to me for two or three of my scores this year through the hard work he is putting in, winning the ball, and I am there on the end of it to finish it off.

It’s just about finding yourself in these positions and being very adaptable to them all.

There are so many different systems and stuff now. Teams working back defensively and then coming forward again, tracking players, your concentration levels have to be so high these days to play hurling".

One of the pivotal moments of the semi-final win was Padraic's hook on Conor Cooney when the Galway man had only goalie Darren Gleeson to beat, an incident when he displayed his defensive instincts at their sharpest.

"Between a few of us we didn’t quite see him there. I remember looking at the video, I was calling someone else and I turned around and I happened to see him at the corner of my eye just in time.

It was vital, the game was coming down to small margins at the time, isn’t that what they say, and that was one of them.

Conor Cooney got away from us because they were switching so much that you have concentrate on where the nearest man to you is. A small thing like that can change the game".

As well as defending and scoring the occasional point, there's also the requirement to supply the forwards with decent possession, something that didn't always go according to plan in the semi-final.

"All year a major part has been ensuring we gave the boys inside good service and we turned away from that the last day. That comes back to the pressure Galway were putting on us too. That is the way Kilkenny will be as well.

It is up to us around the half back line and the middle third to get the service into the boys because we know if they do get a ball in their favour that they are well able to put it away, they have proved that this year so far.

It comes back to being a bit calmer under pressure. You only have a second or two against the likes of Galway and Kilkenny and these teams so it about being composed on the ball and using it to the best of your ability, because you can’t afford to give away as much ball against Kilkenny as we did in the semi-final, as they will punish you".

The wing-back, is also full of praise for "the fantastic job" that Michael Ryan is doing.

"Mick was there in Liam (Sheedy)’s time and then he got a couple of years under Eamon (O'Shea) again. He has picked up a lot of experience in his time, he had added his own impetus too.

Mick brings a lot of honesty to the table and once you are willing to put in the graft for him and are willing to try and do the right thing, he will back you up all day and that has been showing in our performances. There is more enjoyment and there is no fear in us any more.

Please God he will finish the year on a high".