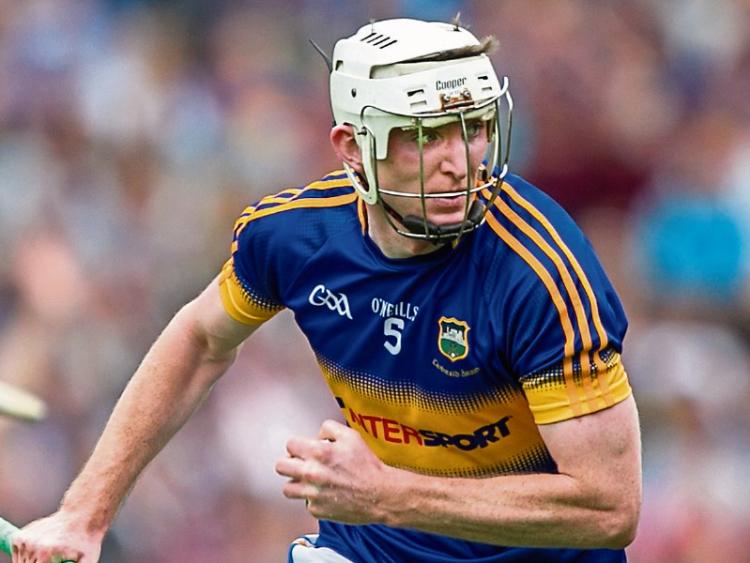 All talk of the dream double for Tipperary may have ended in Croke Park on Sunday week last with the defeat of our footballers, but for one Tipp hurler on Sunday next there is the possibility of a unique double all of his own.

Wing-back, Seamus Kennedy, could become the first-ever Tipperary player to win both a minor football and a senior hurling All-Ireland medal. And if the St. Mary’s Hurling Club star does accomplish such a feat it will be down to not alone his superb talent in both codes, but an even more focused determination not to accept second best, especially with the small ball.

From an early age Seamus Kennedy has excelled at both football and hurling with Clonmel Commercials and St. Mary’s respectively, and has been involved in county teams at all grades on and off since minor level.

He was a member of the Tipperary minor hurling panel in 2010 and 2011 and was also wing-back on the county minor football team when they won the All-Ireland in 2011. When Tipp captured the Tommy Markham Cup with that unforgettable 3-9 to 1-14 victory over Dublin in the final, it was only the second time in history that the Premier County had been crowned champions.

After minor grade Seamus progressed to the county under 21 hurling panel, representing Tipperary from 2012 to 2014 while at the same time making the county under 21 football team in 2013 and 2014 (losing both finals to Cork; captaining the 2013 team).

Seamus actually made his senior football inter-county debut against Cork in Páirc Uí Rinn in the McGrath Cup in 2012 when just out of minor, but then decided to come away from football for a reason.

Seamus, who will commence his Master studies in UCC in the coming weeks, eventually rejoined the Tipperary footballers for the 2015 National Football League campaign (after being dropped from Eamonn O’Shea’s hurling squad) and made his championship debut in a victory against Waterford in Thurles .

When I spoke to Seamus before that game in May 2015 he was totally honest about his feelings for both codes.

“I came away from it (football) after that (2012). Hurling would probably be my first love but I love football too. I love hurling as well. I really wanted to give the hurling a rattle so I stepped back from the senior football and concentrated on under 21 football and senior hurling, but it didn’t really work out for me, unfortunately,” he added.

But isn’t a year a long time in sport.

A call-up from Tipp hurling manager Michael Ryan at the start of the year followed and Seamus was left somewhat in a dilemma. Would he stay with a Tipperary senior football squad making steady progress or would he opt to try and break into the hurling panel once again? His ‘first love’ won out and Seamus’ decision and his second chance has reaped rewards. He broke through for this year’s Munster championship opener against Cork and has started every game since, against Limerick, Waterford and Galway. He now has won a Munster senior hurling medal and will be hoping to complete a magnigicent year on Sunday next if Tipp can wrestle the McCarthy Cup from Kilkenny.

Should the Premier County prevail, Seamus will become only the second hurler from the St. Mary’s Club to win an All-Ireland senior medal, Donncha Fahey being the first in 2001. Before that Clonmel has to go all the way back to 1965 when Theo English (Marlfield) won the last of his five All-Irelands.

This year to date has been an amazing roller-coaster of a ride for the dual star, from the county senior football final win against Moyle Rovers, to a first-ever Munster Club win against Nemo Rangers , to the heartbreaking defeat to Ballyboden St. Enda’s. With the football parked, more or less, since February, it has been hurling full-time for Seamus since. His promotion to the county’s No. 5 jersey and a Munster senior medal in his first full year with the seniors have been the highlights. Let’s hope that roller-coaster reaches its zenith on Sunday next around 5 o’clock.

“We are over the moon to have a St. Mary’s player of the calibre of Seamus Kennedy involved in the All-Ireland senior hurling final against Kilkenny. The importance of having a county player in your club cannot be overstated. It is inspiring for all our underage players and demonstrates that they too can wear the ‘Blue and Gold’ of Tipperary if they have the ability and the drive like Seamus Kennedy has demonstrated,” said Brendan.

“There is huge excitement about the club right now, you can feel it in and around the field at training. Indeed Seamus came into the field only last night to watch an underage challenge and you could sense the excitement among the kids when he is about. Seamus has always been great at that, at coaching, encouraging young lads, offering some advice, giving a hand at a training session,” added Brendan.

“Seamus has been fiercely determined as a hurler, going back to when he was even 10 or 12 years of age. Even then he had his ‘both eyes’ on playing for Tipperary. He was involved in minor and under 21 in the past and now he is a ‘settled fixture’ on the Tipperary senior team. It’s his reward for years of dedication to hurling,” added the club juvenile chairman.

“We are all looking forward to the final now, especially with having one of our own playing. It is not alone a great boost for our club but for the town in general, not considered a traditional hurling stronghold in Tipperary. Seamus is an inspiration to the promotion of the game in St. Mary’s and hopefully there will be other young lads to follow in the future. He is without doubt a source of immense pride to the club. Hopefully the result will be right one against Kilkenny,” concluded Brendan.