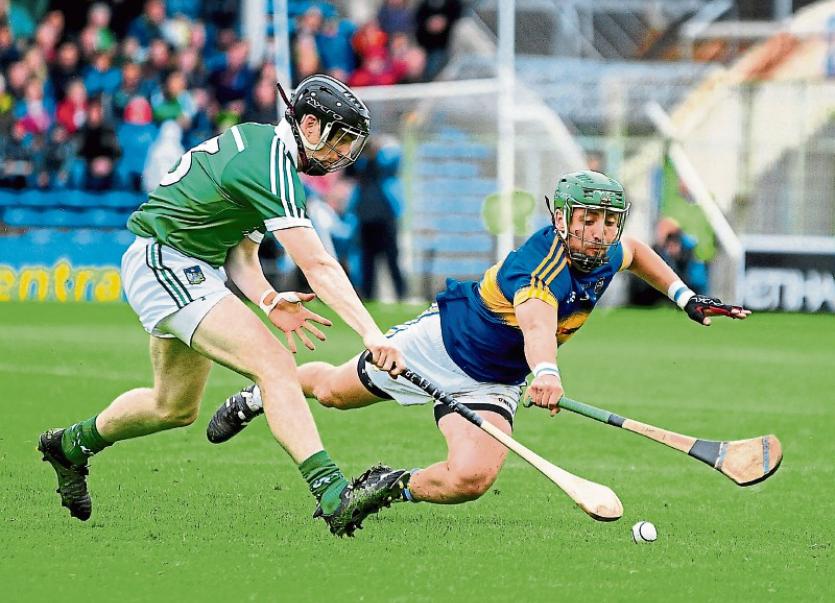 Hurlers may not be known as an overly cautious bunch, but Tipp’s James Barry couldn’t have been accused of tempting fate when it came to picking a preferred opponent for Sunday’s All-Ireland final.

“I didn’t watch the other semi-final because I wanted to give my full attention to our game with Galway,” the Tipp full-back said. “I wanted to make sure we got through our game first. I have the games recorded though, so I’ll be watching the first half of the drawn game to see how Waterford got on top of Kilkenny.”

Barry’s determination to focus on the obstacle in his path was the right option, but at stages it looked like Galway would prove a hurdle too tough to clear.

“We couldn’t get going in the first 15 minutes,” was the Upperchurch man’s explanation for Tipp’s sluggish start. “Galway implemented their plan on us and we couldn’t get the hurling we wanted going.

“Perhaps it was due to the five-week break after the Munster final, but we knew once we were within two points of them at half-time that we were capable of scoring goals in the second half. We knew the forwards wanted to up their work-rate and improve their physicality and get on the front-foot. We were lucky that Bubbles (John O’Dwyer) came in and got a goal. It was a massive lift for us that the two goals came so quickly after each other, as it gave us a lead we could hold on to for the last 10 minutes.”

The two goals Tipp got in that game were a real knockout blow.

“I didn’t realise the two goals came so quickly after each other,” Barry said. “I was so busy trying to pick up my marker that I didn’t notice how they came within seconds of each other.

“It was huge, especially in a place like Croke Park and its noise,” he added. “It’s a big factor playing there, especially with the crowd getting behind you. They pushed us over the line, helped us make those late clearances.”

The crowd certainly played their part as the game reached a thrilling finale.

“It was chaos there for the last 10 minutes,” he said, reliving those frenetic final stages. “There were bodies everywhere, it was hard to keep our shape in the backs and pick out the passes that we’re used to making. Thank God the clock was on our side this time and, when the two minutes of injury-time were up, that the referee blew the whistle. We hadn’t much left in the tank defensively at that stage.”

A busy Croke Park is known for its intensity, noise and bedlam, but how do hurlers keep their focus in that arena?

“That’s the way the game goes in the last five minutes,” he added. “It’s pure instinct and reaction, to get the ball down to the far end of the field as quickly as possible in the hope your team can get a score and keep the opposition scoreless.”

Mention of the five-week layoff brought the conversation down a route Kilkenny also travelled. Like the Cats, Tipp had a long break after winning their provincial championship - was that almost to their cost?

“We thought we had prepared to the best of our abilities and training went well, but maybe we were missing the match sharpness you can’t replicate no matter how much training you get in here in Thurles,” he said.

“You can’t match the experience you get from games - you saw that in 2014, when we were beaten in the first round by Limerick and took advantage of going through the back door. We had a good run-out every second week, which gave us something similar to the League format. That’s something the players want, but we managed to overcome that slow start against Galway in the second half.”

Barry’s opinion echoed that of Kilkenny’s Richie Hogan, who spoke of the benefits a League-style format would bring to the game.

“Look at it from the fans’ point of view,” the Tipp man said. “They want to see all the top players, the likes of Kilkenny, Galway and Waterford, play week-in and week-out. We’ve only seen the hurling championship take off in the last few weeks so it’s a pity that people don’t get to see these top games more often.”

Talk of an alteration to the championship will have to wait for another season. For now, only two sides are left in the running for the hurling’s Hurling Grail.

“It’s the final that everyone has been talking about,” he said. “The two teams seem to bring out the best in each other and this Sunday is going to be no different. It’ll be a clash of chaos and noise, but hopefully when it comes to the last 10 minutes we’ll be able to push on.”

Do that, and Tipp can get one over their old rivals - but Barry knows what the Cats are capable of.

“Kilkenny are the masters of the last 10 minutes,” he said. “They have that mentality and strength that sees them overpower opponents in Croke Park. They have a belief that they’re an unbeatable force there, but hopefully we’ll be able to bring that to an end in 2016.”