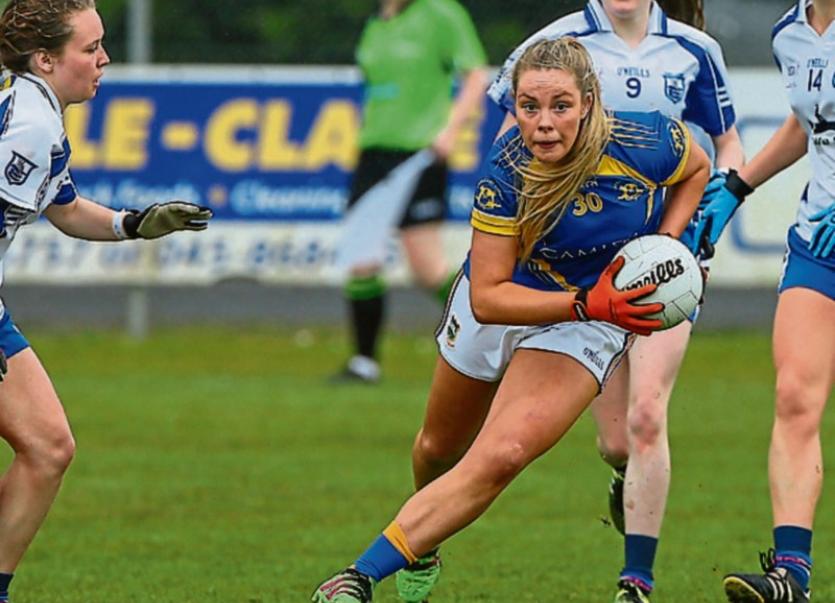 NIAMH O’Dea’s super-show steered Clare into a first TG4 All-Ireland ladies intermediate football final since 2009 with a narrow one point win over a brave Tipperary.

The Banner County avenged their Munster final defeat against Tipp to book a Croke Park slot with Kildare on September 25.

And O’Dea bagged 2-5, all but one score from play, as Clare emerged by just a single point against their provincial rivals at the Gaelic Grounds in Limerick.

In a thrilling finish, Tipp had chances to level but Clare, with suspended manager Neil Moynihan watching from the stands, held out.

By half-time, Tipp had got themselves to within a point, trailing by 1-9 to 2-7, after Clare established a six-point advantage.

The Banner star had her first in the 23rd minute with an unstoppable left foot shot and she was on target again a minute later with another clinical finish.

Clare were now 2-7 to 0-7 clear but Tipp, crucially responded with points from Aisling McCarthy (pictured) from a free and Eimear Myles.

Clare then went close to another goal when Gráinne Nolan fired inches wide before Tipp found the net in the final minute of the half.

McCarthy and Orla O’Dwyer did well in the build-up work before Cathríona Walsh pounced from close range.

It was a cracking final ten minutes to a half that had been level three times.

Clare did create the better goal chances but Tipp, with Mairead Morrissey orchestrating matters from centre forward, hung in and were within striking distance at the break.

Clare came close to the game’s opening goal when Ciara Hickey fired a shot at Hickey but O’Dea took her chances when they arrived.

Gráinne Nolan got Clare off to a flier with the opening point of the second half before Niamh Keane fired home a sensational goal that rattled the back stanchion.

A run of four points without reply brought Tipp right back into contention and sub Róisín Howard netted a sensational solo goal with 16 minutes left – an effort that put Tipp a point clear.

Crucially, Emma O’Driscoll made a brilliant point blank save to keep out Orla O’Dwyer shortly after and Clare hit back at the other with an equalising point from O’Dea, tying the scores at 3-11 to 2-14.

In a frantic finish, Clare hit the front twice more but were reeled in by Tipp on both occasions.

After O’Dea knocked over the late point that would prove to be the winner, Tipp had chances to draw level but couldn’t find a leveller.