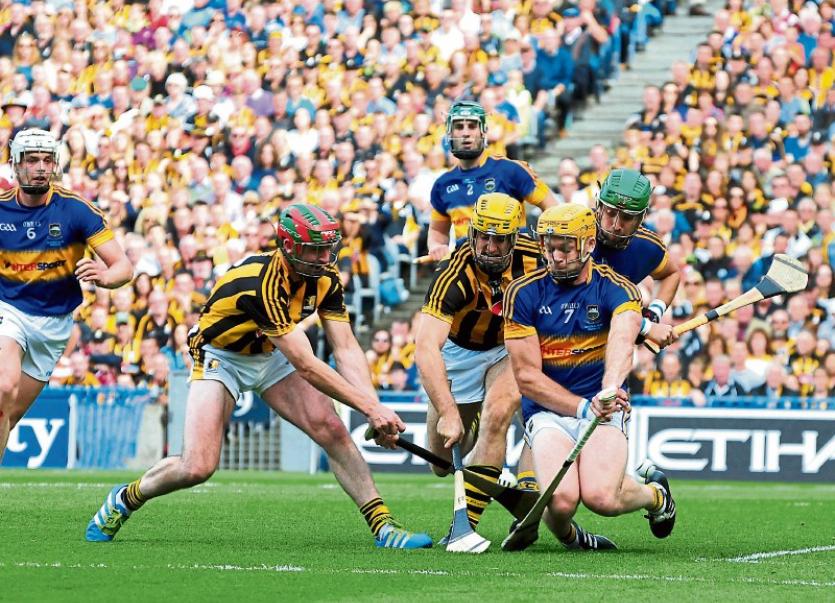 Was there ever an All-Ireland victory as sweet as this? Once more Tipperary spiked Kilkenny guns as the title-holders for the past two years chased a third-in-a-row to bring the Liam McCarthy Cup to the Premier County for the twenty seventh time, and the first since that memorable win in 2010 when Tipp foiled Kilkenny’s quest for five-on-the-trot.

An attendance of 82,016 witnessed an epic battle in Croke Park on Sunday between these giants of the game as “The Cats” suffered a rare setback under Brian Cody, their manager in their quest for a 37th title. Tipperary manager Michael Ryan looked for steel and intensity from his charges to stop Kilkenny in their tracks, and he got it in spades as his team out-muscled and out-hurled their opponents to a degree that nobody anticipated.

Much was made in the run-up to this game of Tipperary’s path to the All-Ireland final. According to the experts, Cork and Limerick were very poor, Waterford did not turn up for the Munster final, and Tipp were lucky to beat Galway in the semi-final. Tipperary were not being given credit for their performances but how that has all changed now as the pundits queue up to sing the praises of the boys in the blue and gold.

With the minors also triumphing in their final, the first leg of a double not achieved by Tipp since 1949, it was indeed a wonderful day to be from Tipperary. And how the fans loved it. Headquarters echoed to the strains of Slievenamon and The Galtee Mountain Boy as captain Brendan Maher accepted the McCarthy Cup, and the squad was cheered to the skies by success starved supporters as they did a lap on honour afterwards. It was an occasion Tipperary people everywhere had waited for for so long, and one that will be remembered for years to come.

Suffering so many setbacks at the hands of our neighbours made this victory all the sweeter. Kilkenny have stood between Tipperary and hurling’s Holy Grail so many times since the turn of the century that to many they seemed almost invincible. They have been the worthiest of champions and no one can take from them their marvellous achievements under manager Brian Cody, but this was Tipperary’s day as they raised the intensity of the exchanges to a level that Kilkenny could not live with, and ought to have won by even more than the impressive nine points margin.

In short, Tipperary did to Kilkenny what Kilkenny have been doing to all and sundry(Tipperary included) for more than a decade and have emerged as great champions. A word of caution though – do not write off The Cats for next year. They were found wanting on this occasion but if the teams were to meet again this coming Sunday, who would put their shirt on a Tipperary win by nine points?

It was a contest well worthy of the national showpiece. The two sides faced each other, man on man. There no “sweepers”, just honest to goodness hurling at its best, and Manager Michael Ryan and his backroom team can take the kudos for the manner in which the Tipp lads imposed their game on the opposition, and had the self-belief to absorb the setbacks that came their way while driving on for a victory that will be glorified by the ballad-makers and poets in the days and weeks to come.

Those balladeers will surely extol the virtues of a Tipperary full-forward line that between them bagged 2-21 in their demolition of the Kilkenny inside backline which surprisingly stayed intact for the duration of the game. John “Bubbles” O Dwyer’s selection was in doubt beforehand as some suggested the Killenaule man should be kept in reserve as an impact sub. The management decided to put its best foot forward, naming “Bubbles” in the starting fifteen, and he repaid their faith in him with a sparkling display that yielded 1-5, (1-2 from play).

But it was Seamus Callanan who scooped the Man of the Match award with a brilliant thirteen points, nine from play, in a performance which must have sealed the Player of the Year award for the Drom-Inch marksman, if there was any doubt about it before last Sunday.

And for John McGrath, surely the find of the year for Tipperary, the Young Hurler of the Year award should wind its way to Loughmore-Castleiney ,as he again showed a maturity beyond his years with a flair for scores(1-3 from play), wreaking havoc in the Kilkenny rearguard.

The scorers catch the eye, but the defence was magnificent. They hounded their opponents in aa manner Kilkenny have seldom experienced with the Maher brothers Ronan and Padraic outstanding in a sextet that never flinched in the face of Kilkenny pressure. And they were backed by a superb Darren Gleeson whose goalkeeping exploits kept the Noresiders at bay when any lapse might have sparked their revival.

A nine points winning margin did not seem likely in a competitive first half as the sides traded points in see-saw fashion. Seamus Callanan and “Bubbles” were on their toes from the start as the teams shared twelve points after fifteen minutes. Tipperary had a let-off in the 18th minute when Darren Gleeson stood up well to Colin Fennelly’s shot for goal, T J Reid converting the resulting sixty five. Significantly, Reid’s points-taking from frees was Kilkenny’s main source of scores. He landed six in the first half and another five after the break, in itself an indication of how well the Tipperary backs were dealing with the threats from open play imposed by Kilkenny.

It was enthralling stuff, free-flowing, intense but admirably sporting, and after thirty two minutes the sides were level at 0-12 each. A marvellous Seamus Callanan point and a John O Dwyer free edged Tipperary ahead 0-14 to 0-12 at the break but it was very much anybody’s game. Tipp’s main concern was their nine wides to Kilkenny’s three – could we afford to waste those chances against such opposition?

Renowned for their second half opening bursts, Kilkenny did not fail to deliver. They had two Reid points to Callanan’s one for Tipp before Kevin Kelly was on hand to tap a Walter Walsh pass to the net in the 41st minute for a 1-14 to 0-15 lead.

Tipperary’s response best illustrated the mood of the men in the Blue and goal jersies. Callanan(2) and Jason Forde, who had come on, pointed, and in the 48th minute “Bubbles” pounced for a Tipperary goal that signalled the beginning of the end for Kilkenny. Padraig Maher hit a mighty point from midfield and though T J Reid countered for Kilkenny, Callanan(2) and John McGrath swept over points that gave Tipperary a commanding seven points lead after 54 minutes.

Darren Gleeson denied Kevin Kelly a goal with a save at point-blank range – a crucial stop to stifle the possibility of a Kilkenny rally. Time was on Tipp’s side as the teams traded points and in the 60th minute came a Tipperary goal from John McGrath after Noel created the opening for a 2-25 to 1-19 lead. There was little time for back-slapping as two minutes later Richie Hogan rifled home a Kilkenny goal to put the game back into the melting pot.

If anybody doubted the resolve of the Tipp boys they got their answer now. Kilkenny went in search of further green flags but Tipperary were equal to the challenge and circled the wagons to close off all avenues to goal. One particular intervention by James Barry to deny Hogan typified the Tipperary spirit and in those closing minutes, Tipperary outscored their opponents four points to one, “Bonnar” Maher rounding off a great day for himself and his colleagues with the last point of the game as the contest went into injury time.

On a marvellous day for Tipperary it is fitting to acknowledge the great champions Kilkenny have been. Toppling them adds immeasurably to the Tipperary achievement. These were hurling’s heavyweights slugging it out for the top prize and they did not disappoint with a contest that had everything one could ask for, and which produced the right result, at last, for a long suffering Tipperary public.

Kilkenny were disappointed and justifiably so on a day when so few of their men were seen at their best. T J Reid’s accuracy from frees; Richie Hogan’s occasional flashes; Walter Walsh’s honest endeavour, Kevin Kelly’s opportunism, and Padraig Walsh’s sorties out of defence were not enough to inspire faltering colleagues. It is a long time since Kilkenny supporters were leaving the ground before the end of an All-Ireland final but such was the case last Sunday.

Heroes all-round for Tipperary. Apart from those already mentioned- Cathal Barrett, James Barry and Michael Cahill were tenacious in the inside defence and relieving in their deliveries. Seamus Kennedy grows in stature with each game. Brendan Maher had his best outing of the year while Michael Breen, though not as influential as in other games, hurled solidly. “Bonnar” Maher’s work in the attack was immense. Likewise Dan McCormack worked his socks off while Noel McGrath, though not as intensely involved, made a significant contribution, particularly with the assist for brother John’s goal. Jason Forde notched two points in a very productive spell when he came on as a sub.