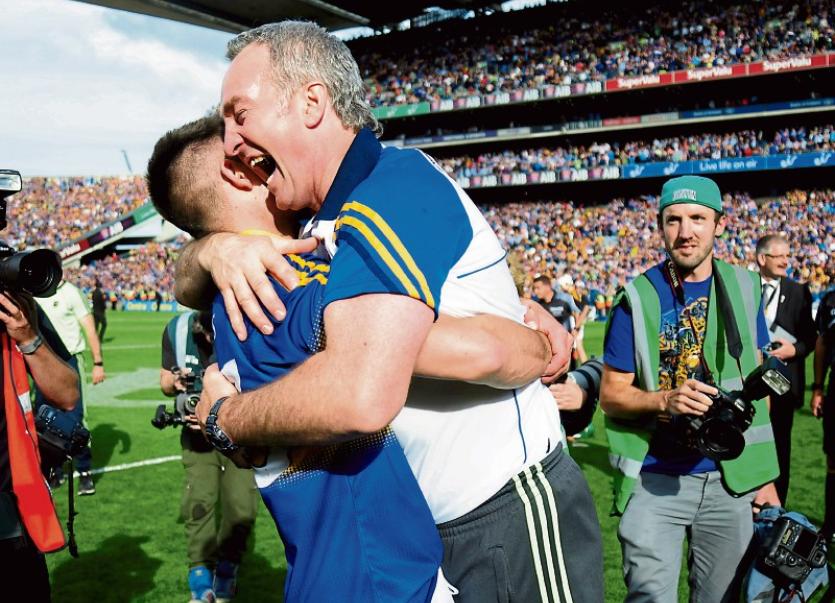 Tipperary Manager Michael Ryan has witnessed a lot as a player and as a mentor -he has won All-Ireland's and he has lost them too.

So, when he had the feeling that Tipperary were in extactly the right frame of mind for Sunday's All-Ireland Final, and when he saw his charges enter the arena with their weapons drawn, he knew that there was every chance it would be Tipperary's day.

“From the very off, I felt that we were right. And in that vital period in the second half of the game, we just came back and maintained the work for the whole of the half after they had got that goal. We had the intensity and that was absolutely crucial. It tipped the scales in our direction. I felt that we put in a phenomenal second half in terms of intensity and workrate. The levels were exactly what you would want, but we also showed great skill and composure I felt - it wasn't all about intensity,” the Upperchurch Drombane man told the waiting media after the game.

He had just watched his men come through a pulsating and thrilling victory and as the beads of sweat trickled down his forehead, he hardly seemed to notice - he was still in the zone, totally focused and fielding questions with the ease of a pro.

Tipperary got some magnificent scores and had managed to keep the scoreboard ticking over all the time - 31 scores in 70 minutes is a very impressive return and Michael was pleased that his players were able to create the chances, and crucialy, execute them.

“We kept daylight between us and managed to keep our noses in front which was vital at the time, I thought,” he said.

Asked about the contribution of John Bubbles O'Dwyer and the decision to start him, Michael was lavish in his praise for the Killenaule man. He had, he said, been in flying form in training and wa s picked on merit as a result.

“He just showed us something that we needed in this game and he had a touch of class about him today. The ball was just sticking for all the team and it was great. Ye don't need me to tell ye how great Seamus Callanan is either. I mean nine points from play is remarkable in an All-Ireland Final,” he said.

Paying tribute the role Eamon O'Shea had played in the development of the squad, Michael was also quick to point out that previous managements had been close to winning too, but just missed out. However, those defeats were in the past and Tipperary had concentrated on living for the here and now. “You cannot live your life looking over your shoulder - you must live for it now and play for it now as well,” he said.

Getting back to the question of intensity and finding ther secret formula for victory, Michael insists that there is nothing new in the approach of Tipperary. OK, they drove ball long all day into the forwards and it was reaping rich rewards, but workrate was always a given at the highest level - perhaps it is only being spoken of more in this day and age.

“There is nothing revolutionary about forwards working hard, but we just seemed to get to the pitch of it today. I thought our forwards were outstanding today - not only did they get the scores, but they also defended from the front too,” Michael said.

So did Tipp answer the critics who doubted their ability?

“I felt all season long that the team has been answering a lot of questions asked of them. But, you have to remember that it is very difficult to win games against top opposition. Over the last number of years we have been coming up against the best team in the history of the game and the best manager in the history of the game. It's not easy to win games against them. We did today and we are absolutely delighted. We'll enjoy this for a bit but then we'll have to get back to it again,” he said.

Michael had missed out on the Jubilee Celebrations with his colleagues of the 1991 team, but his mother had represented him on the pitch on the day. And, his former colleagues from that team were overjoyed to see that Michael, Conor Stakelum and John Madden had worked the oracle once again for The Premier County, twenty five years after they had starred on the pitch themselves.

Now for his charges, the thing is to retain the title for the first time since 1964/'65.