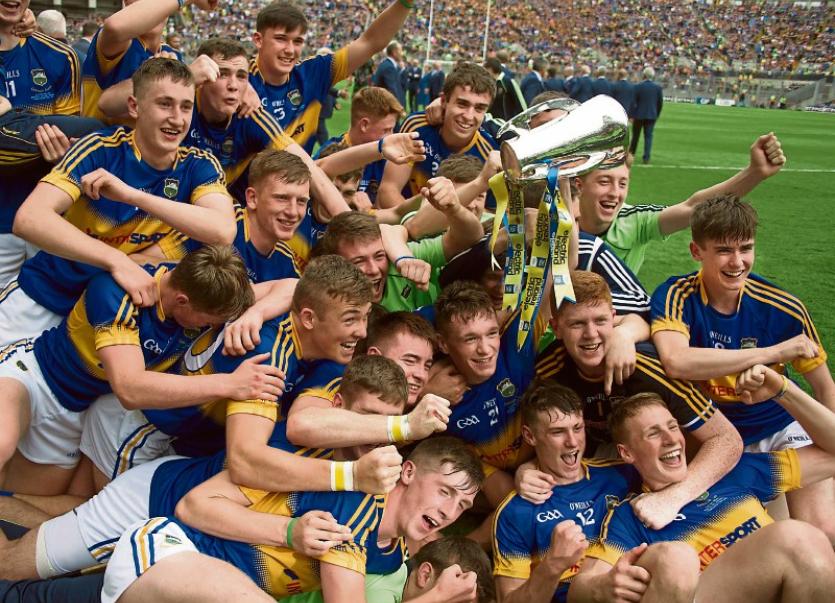 A Tipperary minor hurling team brimming with exceptional talent and intense desire set the triumphant tone on All-Ireland day in Croke Park on Sunday securing the 20th crown in the grade for the Premier County.

The minors claimed victory with an efficient performance, lacking the swagger and dominance that illuminated a Munster final seventeen point rout and a seven goal haul against Galway inthe semi final.

They accounted for Limerick in economical fashion, carving out a seven point victory on a day when their Munster rivals offered much sterner resistance than they mustered in the one sided seventeen point rout in the Munster final.

A repeat of that Munster final procession was never on the cards with Limerick managing to stay in the picture even after suffering the setback of Tipperary’s breakthrough goal in the thirty fifth minute.

Limerick refused to buckle on this occasion and were just four points off Tipperary with fifty eight minutes gone in the match.Tipperary closed out the game taking the last three scores of the game without reply to seal the title.

It was far from comfortable on this occasion for Tipperary whose quickfire sta rt to the second half set the foundation for this memorable victory , a year after the county minors suffered Croke Park heartbreak in the final last year.

It took a piece of magic from one of the players that has proved to be such an important part of a mesmerising attacking force in this years championship, to give Tipperary the edge in this contest.

Tipperary held the most slender of leads at the half time break and needed something special to shake off the obstinate Limerick challenge.

Man of the match, Fr.Sheehy’s Colin English stretched that lead out to two points before Jake Morris pounced for the most important score of the game.

Like a good number of the Tipperary forwards Morris had struggled to get into his usual free flowing rhythm given Limerick’s doggedness in the tackle, spirit and tenacity they displayed throughout the first half as they stayed on Tipp’s heels.

The Nenagh predator stamped his class on the occasion when he invited the marauding Mark Kehoe, now stationed in a midfield where he played a much more influential role in the game after switching from full forward,to put him in.

Morris set off on a direct run in anticipation of Kehoe supplying the pass and the Kilsheelan-Kilcash man delivered.

Kehoe used his pace to get away from a number of Limerick defenders before hand passing into the path of Morris. Morris ran onto the pass, executed a beautiful pick up, used his feet to create the space which enabled him to get his shot away .

Morris struck low to the corner of the net giving Mark O Kelly on the Limerick goal no chance.

Seconds after playing a major role in establishing a five point lead for Tipperary Morris almost ruined the moment when he was involved in an off the ball incident with Josh Adams.

He immersed himself in the game again fairly quickly pointing a crucial score as Limerick fired over three in quick succession in their positive reaction to the Nenagh marksmans goal.

Every time Limerick threatened to force their way back into the game Tipperary responded in positive fashion.

Brian McGrath landed a 65 for his second point of the game and after Limerick substitute Paul O Brien pointed for Limerick Tipperary put over three without reply from Colin English,Mark Kehoe and Lyndon Fairbrother, all from play, to keep Limerick in their place.

That was the pattern of the second half .Limerick remained in the game thanks to the excellent contribution from play and placed balls from Brian Ryan but Tipperary never looked in trouble after Morris had given them such a firm grip on the game.

Ryans free in the 58th minute, his eleventh score of the game, left his team just four adrift of Tipperary.

Limerick had nothing left to threaten Tipperary in the final minutes. They failed to score again and Tipperary extended their lead with three more excellent points from play to give them a seven point victory.

Those final three scores embellished a memorable victory with Mark Kehoe, taking his second score of the game, Ger Browne and Shane Neville all picking off stylish scores to put a gloss on Tipp's triumph.

It had taken a while for Tipperary to get into their stride in this game as Limerick started off the much more positive team'. in the opening exchanges.

Tipperary wasted a lot of opportunities in the opening half registering seven wides to just f our for Limerick.

Fortunately for Tipperary goalie Ciaran Barrett was in fine form and when he was called upon after eighteen minutes he pulled off a point blank save from Conor Boylan.

That save was crucial to keeping Limerick at bay and Tipperary were able to keep thei r noses in front thanks to Lyndon Fairbrother's accuracy from frees.

Limerick were well in the game at half time.They had managed to put their seventeen point mauling at a drenched Gaelic Grounds behind them to provide greater resistance to Tipperary on this occasion.

It took a piece of magic from Jake Morris to put daylight between the teams early in the second half and from that moment on Tipperary proved strong enough to see the game out.

Tipperary also had the advantage of being able to summon more firepower off the bench.