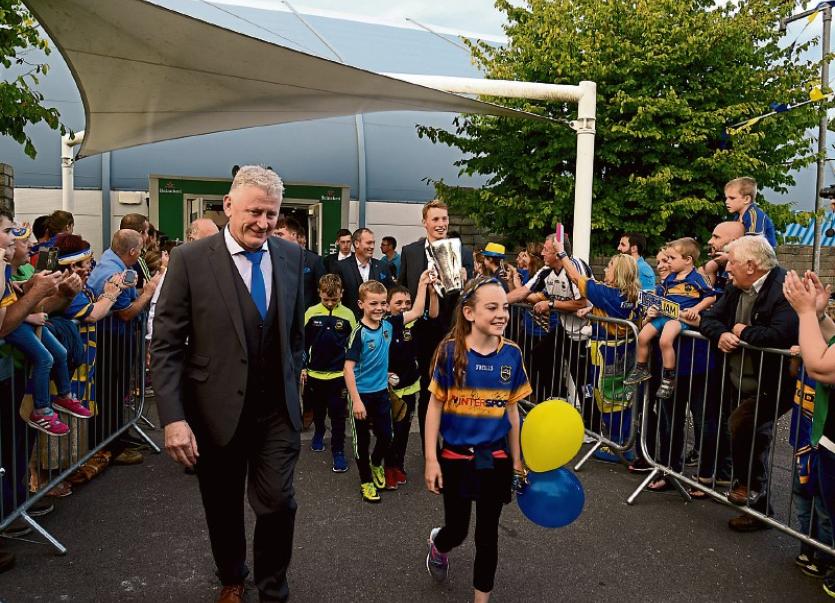 We can only but acclaim our heroes this week and bask in the glory of success. The feeling in Tipperary last week was that if we performed we would win two All-Ireland Finals - so it played out, and though it is indeed far easier said that done, Tipperary showed up on Sunday with buckets of courage, loads of patience, and a hatfull of skills.

The minors certainly set the tone and though it was a curious type of game, an All-Ireland title is an All-Ireland title - it carries the same currency as any other. Perhaps though the great achievement of this particular minor team was in getting to the All-Ireland Final in the first place, considering the many challenges they faced. The ultimate decider proved to be well within their reach and though they didn't perform at their best, they still had enough to see off Limerick - an improved Limerick side from the Munster Final, it has to be said.

The minor victory could be a major deal for Tipperary in years to come. We have seen a sprinkling of talent coming through to the senior team with the passing of time and now that there will be a pool of champions to choose from, one would hope that the future is bright for current and senior management teams to come.

The minors have been exemplary throughout the season and so too have the management team. Liam Cahill foretold that Tipp could struggle in the opening game against Waterford. They did - they lost in fact. But, he also foretold that the side would be a different one, once the summer arrived. Top-of-the-ground hurling suited the men he had at his disposal and Cahill knew than once Coach Michael Bevans got his hands of those lads with a flying sliothar that they would improve immeasurably. Once again, Cahill was right.

The minor management and backroom team cannot be lauded enough for their efforts. They have been heavily criticised for past failures and for insisting on not entertaining dual players. Whatever side of the argument you fall on, there can be no denial that Cahill's success makes a compelling case for continuing with the current dictat. Sean Corbett, John Sheedy, TJ Ryan, Michael and Liam turned out a fine minor team which did their county proud. They can take a well deserved bow and have probably set themselves up for consideration for other roles down the line as well.

It was very pleasing to see the minors well turned out for the game and in the aftermath. They looked very smart - the look of champions - and they certainly made their people proud on Sunday and at the homecoming on Monday as well.

Our 27th All-Ireland senior hurling title will go down as a very special one. Significant? Yes. Deserved? Definitely? A catalyst? Let's hope so.

Tipperary travelled to Croke Park with a plan and they carried it out to the letter of the law. Nobody really knew if they were ready for the fray - the closing of training in the weeks leading up to the game ensured that the camp was in shut down mode. There would be no prying eyes watching form, no stories carried from the group, no indication as to what gameplan they would play to.

So, it was perhaps surprising to see Tipp playing so direct with almost every puckout going long - very long. Why wouldn't they go long, when Tipp were enjoying so much success in the attack. The art of goalkeeping dictates that the custodian doesn't simply block the shots and puckout the ball - he must also watch the game, assess where advantages are being gained and try to ensure that the ball ends up in that sector more than any other. Darren Gleeson did that on Sunday and he also made crucial saves in either half.

Tipperary were simply hyper tuned-in. They were proactive in the game when at other times against Kilkenny they would have been reactive. That meant that Tipp took the game to Kilkenny from the very off and tried to ensure that The Cats didn't dictate the terms of engagement. If Kilkenny wanted to play the game in the trenches, Tipperary would see them there. If they wanted to open it up and play it wide, Tipp would match them in that style of game too.

2-21 from the full forward line is an extraordinary return and perhaps highlights Kilkenny's difficulties at the back - it was simply unfathomable that they failed to take corrective action at the back, especially with a man like Jackie Tyrrell sitting on the subs bench. Prendergast and Holden were cleaned out - Paul Murphy had a very poor game by his standards.

But, in highlighting Kilkenny's deficiencies on the day, perhaps we should also point to Tipperary's potency. Bubbles, Callanan and John McGrath have been in fine form - on Sunday they all produced it at the same time. Callanan could have goalled too - his flash shot over the bar in the first half was only inches above, while Bubbles should have passed to him for a goal in the 15th minute, but elected to shoot himself with his confidence sky high having just goalled.

Outside, the industry of Bonner Maher and Dan McCormack and the vision of Noel McGrath completed the attacking picture which dismantled the champions.

Interesting to note that the entire Tipperary defence are past pupils of Thurles CBS Secondary School - they played as a well oiled unit, defending, covering, hooking, blocking and scuppering. They showed real strength and power and were simply determined that Kilkenny would not run through them as heretofore - Ronan Maher was a real colossal at centre back with his brother Padraic magnificent as well.

Eoin Larkin, Richie Hogan and TJ Reid were shackled by Tipperary - Walter Walsh was equally as quiet. That was a great start for Tipp and then to add to it, Colin Fennelly and Liam Blanchfield failed to score at all. Just seven scores came from the entire Kilkenny attack in the game - it's a long long time since those kind of stats came home to Brian Cody for analysis.

Ultimately and put simply, that's where the game was won and lost - Tipp's proficiency in attack and their dominance in defence.

Take a bow lads for a magnificent victory. The backroom team had them in peak shape and all that was asked of the side was given. Let's ask one more thing then - let's do the same again in 2017. Let's retain the Liam McCarthy Cup and lose the tag of being the county of one-in-a-row.

It's the Centenary Agri Mid senior hurling final in Templetuohy on Sunday afternoon and it's a mouth watering tie in prospect with Drom-Inch and Loughmore Castleiney squaring up to each other. Drom-Inch, it seems, will be without Seamus Callanan - a massive loss indeed - but they have beaten Sarsfields the county champions without him already this season. Will they do so again? The smart money would be on Loughmore Castleiney winning their first title since 2010. It should be a cracking game and will be well worth getting along to see with the intermediate final between Sarsfields and Drom-Inch again acting as curtain raiser.

There's plenty of club action on the way too throughout the county starting tonight (Wednesday) in the north. There'll be a real rush now to catch-up on lost time due to the inter county scene in both codes and on the double. Sure ,tis a great problem to have and though it causes a lot of headaches, there are 31 other counties in Ireland who would love to have the same problems.