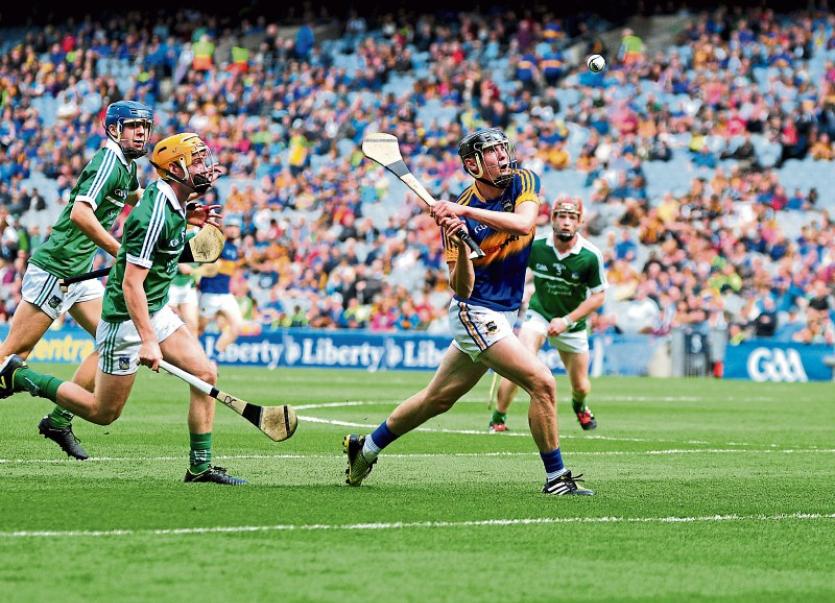 On the day that Mother Theresa of Calcutta was Cannonised at the Vatican, Tipperarys latest hurling saints went marching into the history books in that great Croke Park cathedral, having achieved the minor and senior double All-Ireland victory, thereby bridging a gap yawning back to 1949.

There was scarcely a better place for Tipperary folks to be on Sunday afternoon as the minors led the way and then the seniors blitzed holders Kilkenny to break their stranglehold on the Liam McCarthy Cup. Indeed, despite The Cats recent form guide over Tipperary, the history books now show that of the twenty final meetings between the counties, Tipperary have won eleven and drawn one.

If the last victory over Kilkenny in the 2010 final was signifcant, Sunday was even more so. The Drive-for-Five had been shattered on that occasion, and the three-in-a-row prevented on Sunday. But, it was more than all that on Sunday too - the minors winning and the silver jubilee celebrations for the men of 1991, made it a real Premier day at Headquarters.

Tipperary got it just right on so many fronts on Sunday that they may as well have just ridden in on a palomino and collected the silverware before heading off into the sunset en-route to The Golden Vale. "Oh it's such a perfect day" goes the popular tune by Lou Reed, and it really was that. Perfect.

From the moment Brian McGrath lifted the Irish Press Cup just like John O'Grady did in 1949, it was on the cards that Brendan Maher would lift the Liam McCarthy cup too, just as Pat Stakelum did also in that year. And, how fitting it was that with the minors enjoying their lap of honour, the men of 1991 were on the field to take their salute, but found time to applaud the new kids on the block at the same time. The past was tipping the hat to the future and it felt great.The carnival was getting into full swing, but the main event was still to come.

It seemed as though the Tipperary support well outnumbered The Cats -maybe they didn't but it just seemed that way. The roar was certainly louder from a Tipp perspective and when the supporters found their voice, the team found their rhythm.

Chants of 'Tipp, Tipp, Tipp' reverberated throughout north Dublin as the full force of The Premier passion unfolded - Kilkennys players were left clinging to bindweed for support and ultimately they fell away, defeated and demoralised, but having lost little in defeat - apart from their All-Ireland title of course. Tipperary have now beaten Kilkenny in ten All-Ireland senior hurling finals - more than any other county has done. No wonder then that acclaimed journalist David Walsh, a native of Catland, should write back in 2014 that the first thing he learned to hate was Tipperary - bet he's pretty sick this week again.

It was a sweet sweet day for Tipperary as the 27th senior title was added to the 20th minor one - a return to the glory days of old when All-Ireland titles were common place and when Tipperary proudly took the place at the summit of hurling counties. This week, that place belongs to the blue and gold and the strains of Slievenamon bellowing throughout Croke Park and in many other Premier strongholds since, illustrates the sense of pride which has materialised as a result of having scaled the heights again.

Now we have more heroes to idolise. German poet Johann Wolfgang Von Goethe wrote that ' The hero draws inspiration from the virtue of his ancestors.' Very true. Surely the hand of history was on the shoulder of Tipp captain Brendan Maher as joined his club colleagues Sean Kenny (1950), Jimmy Finn (1951) and Bobby Ryan (1989) in the illustrious list of All-Ireland winning senior captains. Surely too, it was not lost on our current heroes that Pat Stakelum, captain of the team in '49, was uncle of current selector Conor Stakelum, whose son Conor also picked up an All-Ireland minor hurling medal on the day. Surely they knew as they travelled to Croke Park that the chance to smash a 67 year wait was within their grasp. They did smash that gap and in doing so created their own little bit of history.

History is as important as tradition. Without history there is no tradition -thankfully Tipperary is well endowed with both and the many many supporters who have donned the colours, and who have been hoarse since Sunday from the singing and yahooing will remember this week for a long time to come.

All is well in Tipperary now - let's enjoy the buzz and the warm glow of victory.

Pictured Below: cormac Bonner, Paul Delaney and Noel Sheehy from the '91 team saluting the crowd.