Kilkenny could not live with others doing to them, what they have done to so many 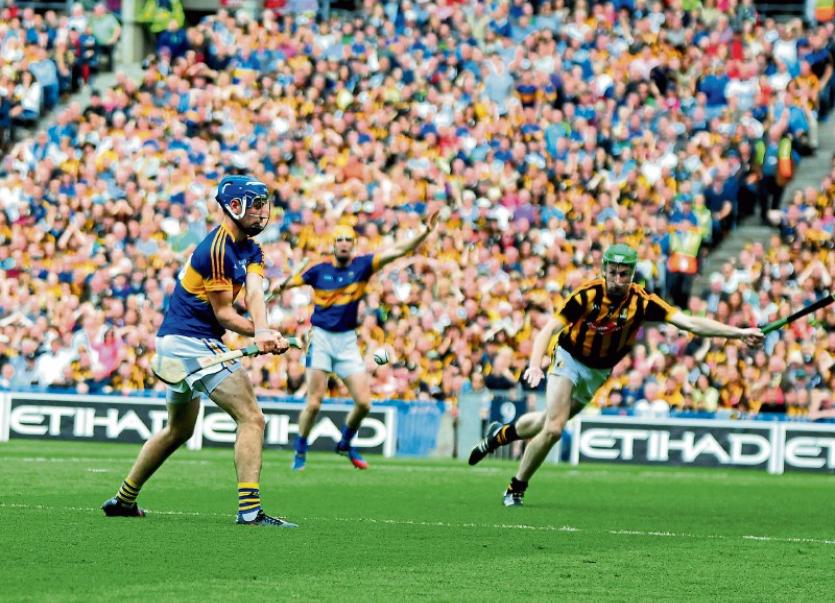 That word 'intensity' has become as intrinsic to GAA-speak these days and the term 'workrate'. And yet, both mean essentially the same thing - you must absolutely fight like a savage, giving no chance for oxygen whatsoever and when you get the foot on the throat, you must apply the pressure with the force of a sledgehammer. That's what Tipperary did on Sunday, and that is why they are All-Ireland champions.

Dress it up whatever way you like, but the simple fact of the matter is that Kilkenny were not able to live with Tipperary on the day -they were leaden legged by game end whereas the Premier men were still floating like butterflies and stinging like bees.

Tipperary not only got down into the trenches and fought like men in the frontline, they dug more ditches for Kilkenny to fall into as well. There were battles going on all over the field and ultimately by winning enough of those, Tipperary prevailed in the war.

Yes Seamus Callanan gets the majority of the kudos with his nine points from play illustrating once more his prowess with sliothar in hand - five in the first half, four in the second, the Drom-Inch man was an open wound for Kilkenny. But, bleed as they did, the master tactician that is Brian Cody didn't try to apply a sticking plaster. Perhaps he felt he didn't have a sticking plaster in his kit and hoped instead that the source of ammunition would dry up. It didn't and Tipp pilfered 31 scores from The Cats - the largest number of scores conceeded by Kilkenny in the Cody era .

Seven Tipperary scores came from direct turnovers - a telling statistic. How pleasing is that and when you have men like Patrick Maher, Dan McCormack and Brendan Maher doing the donkey work, chances will always materialise for the sharpshooters. By contrast, Kilkenny none of Kilkenny's forwards scored a point from play in the second half - how long is it since that happened?

On another day John O'Dwyer could have claimed the Man of the Match award - 1-5 in an All-Ireland Final will, most of the time, win it for you. But, with Callanan in such form, it was a given for the full forward who had Kilkenny in all sorts of bother.

Tipp's forward had all scored by the 29th minute - two of Kilkenny's failed to score at all. And, with TJ Reid and Richie Hogan being shackled so effectively, Kilkennys scoring threat had dried up. Indeed, had it not been for Reids accuracy from placed balls, Tipp would have cantered home - the Ballyhale Shamrocks man bagged 0-11 from frees.

When, by half time, Kilkenny had passed up two goal chances, Tipp supporters began to feel that this could be their title. Darren Gleesons stop from Colin Fennelly and then Kevin Kelly's missed effort in the 24th minute, meant that Tipps 0-14 to 0-12 interval lead was indeed deserved. They were in the zone, moving well and enjoying tremendous success with the long ball into the full forward line where Callanan, Bubbles and John McGrath were all winning their individual battles - Darren Gleeson had lorried almost every puckout as far as he could into the enemy territory.

But perhaps, more than any other indication, the sequence of play just before the half time whistle pointed to the feeling that Tipp were on-song. They harried, chased, blocked and cleared to deny Kilkenny a chance to hit the ball in the middle third -it was vintage Kilkenny, but it was being executed by Tipperary.

When history recalls this game it will record the presence at centre back of u-21 player Ronan Maher - the first U-21 player to hurl at centre back on an All-Ireland winning team, it seems. Maher had an outstanding game as he marshalled the defence and the presence of his big brother watching over him from the number seven berth was as comforting as it was compelling to watch - Padraic's 17th minute score in the second half as he caught overhead Walter Walsh and fired over from 80 yards was nothing short of inspirational.

Together with Seamus Kennedy, they Mahers provided an iron curtain across Tipps half back line - a line Kilkenny felt certain they could win. Cody had placed Walter Walsh, Richie Hogan and Eoin Larkin - three of his most trusted lieutenants - along the line, and watched them being beaten back by force, strength and hurling. Larkin was withdrawn, Walsh was affronted, and Hogan was shackled. These were three big big victories for Tipperary in the personal battle stakes.

Of course, when the half forward line was enjoying little success, it meant that the full forward line would also struggle. Colin Fennelly looked dangerous but with the 'Church man James Barry on the crusade, he achieved little. Michael Cahill and Cathal Barrett were on top in their sectors too, while Darren Gleeson made vital stops and inspired confidence - he had more than 27 re-starts in the game and he made the very most of those throughout.

Captain Brendan Maher played deep - almost as a second centre back - and that offered much protection and ensured that Hogan and co could not get onto ball moving back towards midfield. It worked perfectly with Michael Breen playing more of a holding role in midfield and not getting forward as often as he did heretofore.

Of course, with any perfect recipe it requires genius to achieve the perfect mix - John and Noel McGrath provided that genius. John O'Dwyers goal in the 14th minute after Barrett had broken free from defence, was followed by John McGraths in the 26th after Noel had dispossessed a defender, passed to his brother and watch him fire to the net. Just as in the half back line, brotherly brilliance had worked the oracle for Tipp.

Jason Forde made a big impact too when introduced and his 0-2 really helped the cause. The play had opened up and he benefitted from this moving into good positions and taking his chances when they came.

Tipperary clicked on the day and the hurling skills honed and developed over a few seasons, combined with the huge desire was just too much for Kilkenny, who were gracious and accepting in defeat. They will be back again - no doubt about that. The question now is will we? Will Tipperary successfully defend the All-Ireland crown for the first time since 1965? That's for another day perhaps.

This was the day when Tipp got it spot on and for that the management team and the players can take a very well deserved bow. There were times during the course of the season, when doubts emerged. But, they remained true to their belief and to their cause. In doing so they won over the Tipperary supporters who threw their weight behind the team. Now all can bask in the glory of victory; all can drink in the intoxicating aroma of success; and all can shout Tiobraid Arainn Abu.