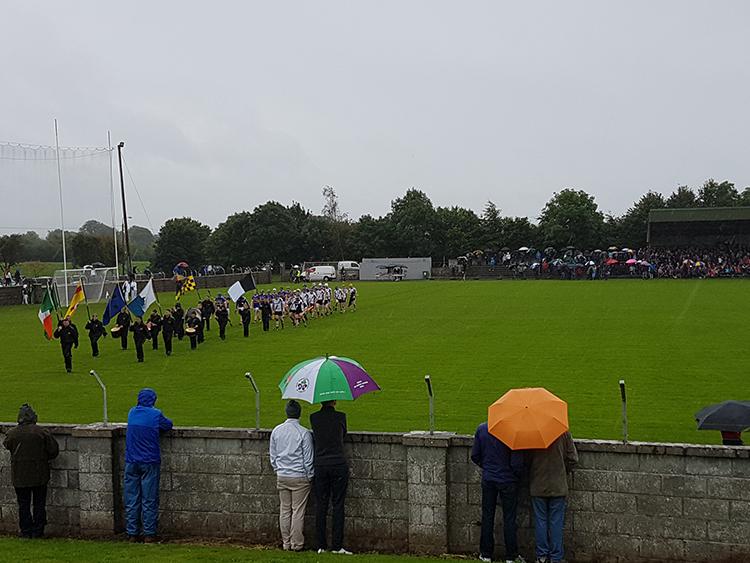 The teams pictured parading in Cloughjordan on Sunday.

Kiladangan franked their dominance of the North Tipperary division at MacDonagh Park, Cloughjordan on Sunday afternoon - this latest success represents the club’s third title in four years. Indeed, joint-captain Darragh Egan noted in an accomplished acceptance speech that his side had no intention of releasing their grip on the Frank McGrath Cup any time soon.

It was fitting that this side was captained by Darragh Egan and managed by Dan Hackett. Both men have made it their life’s work to develop the self-esteem and profile of the Kiladangan club. Both hurled at intermediate level in the blue and gold, but now, thanks to a searing effort, Kiladangan now find themselves beating clubs like Toomevara, Roscrea, Nenagh Éire Óg and Kilruane MacDonagh’s. Indeed, Kiladangan are an example to clubs everywhere: you can achieve by committing to the work involved. The essence of the transformation of the Kiladangan club can be found in joint-captain Alan Flynn. The centre-back represents the next generation of Kiladangan hurlers, a group who are used to playing at the highest level and ready to give their all.

Kiladangan, who featured outstanding performances from Paul Flynn, Hugh Flannery, David Sweeney and Joe Gallagher, represented the more composed side in Cloughjordan. Handling errors and rushed shots defined the Kilruane display - Kilruane fired eleven wides (Kiladangan five) and dropped five efforts short (Kiladangan two) - while their opponents were always prepared to work the position and take that extra half second to get in a clean strike or find a colleague in a better position.

Niall O’Meara and Cian Darcy shone out for Kilruane, but the MacDonagh’s struggled to deliver quality ball to their forwards with the Kildangan forwards working conspicuously hard. That effort successfully contaminated the Kilruane deliveries forward and presented players like full-back Hugh Flannery with the time to get a grip on their men and contest the dropping ball to their advantage.

On an historic day for the Kilruane club the MacDonagh’s gave it their all and were within two points with three minutes to play, but Kiladangan were deserving champions and will now turn their attention to the quarter-finals of the county senior hurling championship on the week-ending Sunday, October 2nd.

We got off to a flying start at Cloughjordan when only a Hugh Flannery hook denied Conor Cleary a goal in the opening minute. Despite that early flurry Kiladangan settled much the better with handling errors costing Kilruane as points from Darragh Egan and Paul Flynn forced the defending champions two clear by the fifth.

Despite an anxious start Kilruane settled with a brace of converted frees from Kieran Cahill and a smashing Eoin Hogan effort helped the MacDonagh’s into a 0-3 to 0-2 lead.

Disaster struck for Kilruane, however, in the tenth minute when Tadhg Gallagher pounced on a ball which broke in behind Jack Peters and flashed home a left-handed pull. Kiladangan added to their tally when Paul Flynn recycled beautifully to Ruairí Gleeson and then Darragh Egan converted a placed ball. Indeed, Kiladangan could have a led by a much more significant margin in the 12th minute when Joe Gallagher sent his brother Tadhg racing through on goal - Ray McLoughney recovered in time to half hook Gallagher and Thomas Williams saved neatly.

A Thomas Cleary catch and point in the 13th minute left three in it (0-4 to 1-4) before Kilruane created a goal-scoring opportunity of their own in the 17th when Brian O’Meara set up Cian Darcy, but James Quigley hooked the county minor and ‘keeper Barry Hogan collected at his ease.

Kilruane shipped a significant blow in the 22nd minute when Justin Cahill was carried off while Kiladangan helped themselves to further scores from Darragh Egan (free) and Paul Flynn as Joe Gallagher’s influence grew and grew at half-forward (1-8 to 0-4).

Niall O’Meara thundered into the game late in the half, however, and Kilruane responded with a Cian Darcy point before Darcy enjoyed another glimpse of the Kiladangan goal in the 29th minute, but ‘keeper Barry Hogan deflected Darcy’s rasper over the bar. Four minutes later Conor Cleary notched a superb right-handed point and, suddenly, there was just four between them. Kiladangan had the final say in the opening half, however, when Johnny Horan won a turnover ball and fed Paul Flynn who fired over (1-9 to 0-7).

Joe Gallagher picked out the blindside run of Darragh Egan for the opening score of the second half. Kieran Cahill responded for Kilruane, but Paul Flynn wriggled away from two wound-be tacklers in the 33rd minute to finish off his left and present Kiladangan with a six-point lead.

Kilruane needed to respond and did so. Brian O’Meara tapped over a free and Kieran Cahill added another while Thomas Cleary was left cursing his misfortune in the 35th minute when Kiladangan ‘keeper Barry Hogan got down smartly to his left to save from the raiding wing-forward.

Darragh Egan swung over a classy sideline ball in the 37th minute, but with Séamus Hennessy now operating at centre-back and Conor Cleary and Niall O’Meara working well at midfield Kilruane had a foothold in this contest. Indeed, a Kieran Cahill free left four in it with twenty minutes to play (1-12 to 0-11).

The quality of Kiladangan’s support play was a huge feature to this game and Dan Hackett’s men carved Kilruane open in the 41st minute when Paul Flynn created an opportunity for Tadhg Gallagher who booted right and wide.

A Kieran Cahill free reeled Kiladangan in a little further, but Darragh Egan (free) hit back before Willie Connors drew audible gasps from the crowd when his clever flick beat Thomas Williams and Séamus Hennessy, but found a post.

Darragh Egan converted a ’65 to leave five in it with fourteen to play; Kilruane required a goal and almost got it in the 48th minute when Brian O’Meara grabbed Séamus Hennessy’s searching free - O’Meara fired in a one-handed shot which went wide.

There was still time for Kilruane to mount a late charge and a Kieran Cahill free helped the MacDonagh’s in that regard before another Darragh Egan free left five between them in the 52nd minute.

With Séamus Hennessy and Jack Peters goading their forward colleagues into greater efforts Kilruane made a significant stand with three Kieran Cahill frees dragging the MacDonagh’s to within two points of Kiladangan (0-16 to 1-15) by the 57th minute. The preamble to the third of these strikes was particularly significant - Jack Peters, Cian Darcy and Niall O’Meara combined beautifully to send Conor Cleary through with room to run into. Strangely, referee Philip Kelly called play back for a foul on O’Meara. The decision was not warmly received by Kilruane supporters.

A lovely left-handed effort from Paul Flynn settled Kiladangan once more before Flynn got through some superb work, turned over Darragh Peters and set up a crucial point for Willie Connors in the 59th minute. Seconds later Darragh Egan added a converted free before Willie Connors scrambled home a second Kiladangan goal in the 61st.

As a consolation Kieran Cahill landed a late free for Kilruane and Brian O’Meara deflected Ray McLoughney’s late delivery past a helpless Barry Hogan in the Kiladangan goal.