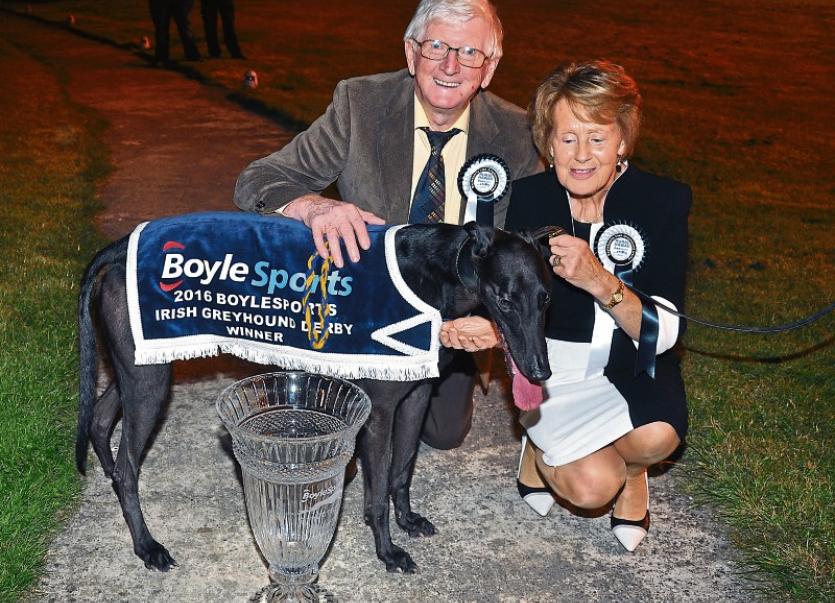 The highlight of the sporting weekend in Tipperlary was the win of Rural Hawaii in the Boylesports Irish Greyhound Derby.

The winner is owned by Clonmel woman Helen O'Dwyer (pictured with husband John) and her son Michael and trained in Golden by Graham Holland.

Holland had three runners in the final.

In GAA, the big news was the win of Clonoulty-Rossmore in the West senior hurling final, beating off a poor challenge from neighbours Kickhams - they now join Kickhams with seventeen divisional titles.

In the intermediate decider, St. Treacys were too good for Golden-Kilfeacle.

In South Tipperary, county and Munster champions Clonmel Commercials, and Cahir qualified for the senior football final - Commercials beat rivals Moyle Rovers while Cahir got the better of champions Kilsheelan-Kilcash.

The rugby season got underway at the weekend with Clanwilliam claiming the first silverware of the season with victory over Waterpark in the Garryowen Cup final.

Cashel got their AIL campaign off to a losing start with a home defeat to Belfast visitors Malone in a wonderful game at Spafield that could have gone either way despite a poor start from Cashel.

Clonmel start the defence of their Junior 1 league title this weekend while Clan, Carrick and Kilfeacle will all be looking for a good run in the league.

In soccer, the big winners were Clonmel Town who hit seven past Galbally United in the FAI Junior Cup, but fellow Clonmel side Old Bridge lost 3-2 away to Holycross.

In the Munster junior cup there were wins for Tipperary Town, Cahir Park, Peake Villa and Glengoole United.