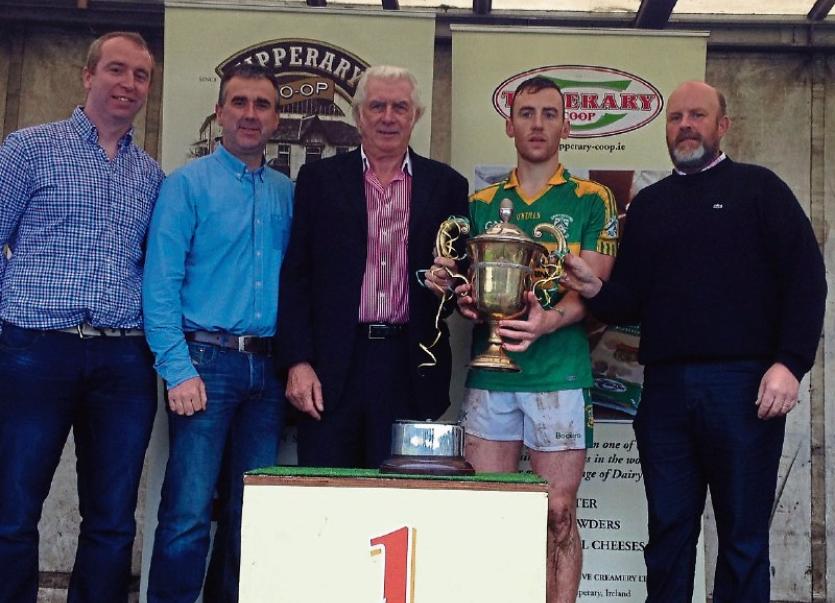 Clonoulty/Rossmore are Tipperary Co-Op West Senior Hurling champions for a 17th time following a comfortable victory over their neighbours Knockavilla Donaskeigh Kickhams in Cashel on Sunday.

Early morning rain failed to clear and continued during the match making conditions tough for both teams.

The result now leaves Clonoulty/Rossmore level with Kickhams on the Roll of Honour and one behind Cashel who top the roll with eighteen titles.

Joey O’Keeffe moved out on Ger Browne from the throw in to try and curb the county minor’s influence on the game.

The sides were level twice in the opening twelve minutes. Timmy Hammersley opened the scoring for Clonoulty/R with a free after four minutes. Ger Browne pointed the leveller three minutes later.

Michael Ryan (w) pointed for Clonoulty/Rossmore who were then dealt a huge blow when Connor Hammersley had to leave the field of play through injury. He was replaced by Tom Butler.

Ger Browne got his second point to level up the game. In the space of three minutes Timmy Hammersley, Paddy Ryan(2) and Fiachra Ryan all pointed from play to leave Clonoulty/R ahead by four points after twenty minutes.

Paudie Slattery reduced the deficit to three with a point and this was quickly followed by a David Butler pointed free.

Clonoulty/Rossmore though finished the half strong with two Timmy Hammersley points and a first of the game for Sean Maher. Eoin Carew added a long range free for Kickhams just before the half time whistle as Clonoulty/Rossmore went in at the interval leading 0-9 to 0-5.

Kickhams tried to change things around at the start of the second half to get themselves into the game with the introduction of Damien McGrath and Nigel Hayes.

Clonoulty/R though were now finding their scores a lot easier and Tom Butler, Timmy Hammersley (one play and one free) and Fiachra O’Keeffe saw them go eight points ahead after eight minutes of the second half.

Hopes of a Kickhams comeback faded fast when Timmy Hammersley took a quick 21 yard free and stroked the ball to the Kickhams net.

Three minutes later Fiachra O’Keeffe latched onto a breaking ball to kick the ball to the net for Clonoulty/Rossmore’s second goal ending any faint hopes of a Kickham revival.

Ger Browne got Kickhams first score of the half on twelve minutes before Johnny Ryan added their second and last score from a free on the three quarter mark.

Both teams now made changes. Timmy Hammersley continued his good form and pointed two more from placed balls. Dillon Quirke a second half substitute added two points from play either side of two more Timmy Hammersley frees as Clonoulty/Rossmore ran out comfortable winners.

Clonoulty/Rossmore controlled all sections of the field with John Devane and John O’Keeffe to the fore controlling their defence with Kickhams struggling to make any real breakthrough in attack.

Timmy Hammersley continued his recent good form from play and placed balls as the Clonoulty/Rossmore attack always seem to be able to find their scores that bit easier.

A delighted John O’Keeffe collected the O’Dwyer cup on behalf of his Clonoulty/Rossmore team mates for the first time in three years from John O’Shea, Chairman of the West Board.

He paid tribute to all involved in the success and to the effort all the players had put in so far.