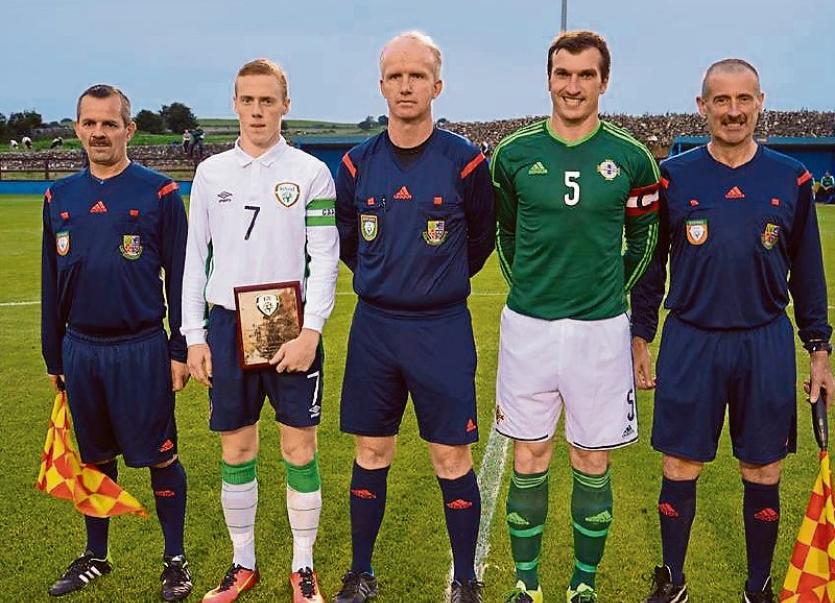 A Tipperary contingent are included in the travelling party that will jet off to Lake Garda this Sunday, September 25, for the forthcoming UEFA Regions Cup intermediate round.

Drawn from Connacht and Munster after their play-off victory over the Leinster and Ulster select, St. Michael's Jimmy Carr and Chris Higgins, and Clonmel Celtic’s David Joyce have been called up to Ireland’s 18 man amateur squad by manager Gerry Davis.

St. Michael’s committee member Pearse Foley will also travel to Italy for the week as the official team physio, helping them prepare for Group 7 encounters with hosts Italy on September 28 in Gorgonzola, FYR Macedonia two days later in Inveruno and a final group clash with Slovenia in Caravaggio on October 2.

The 30 sides who enter at this stage of the competition are joined by two teams from the preliminary round. These sides are divided into eight groups of four, with the winners of each mini-tournament earning a place in the finals which will be hosted by one of the eight qualifiers in June 2017.

Attacking midfielder Jimmy Carr and no nonsense defender Chris Higgins were part of the Irish squad that won the UEFA Regions Cup final tournament in Dublin last year. Carr says there is a “good atmosphere in the camp” ahead of the international fixtures. “I’ve been involved with the squad for a couple of years now. We have lots of new players in the team this year and we are really looking forward to the tournament,” Cappawhite man Carr says.

Carr’s trophy cabinet already includes an FAI Junior Cup medal, three Munster Junior Cup medals, a Regions Cup medal with Ireland in 2015 and a Junior International Player of the Year accolade. He captained the Irish side in a pre-tournament warm up stalemate against Northern Ireland last week, to the delight of his home club.

“It was a huge honour and made us all very proud of the two lads in St. Michael’s AFC. St. Michael’s stalwarts James Walsh and Paul Breen also captained the Republic of Ireland in the past. We would like send the boys good luck wishes in Italy from us all at Saints. Good luck to the team and management,” St. Michael’s say.

Clonmel Celtic’s David Joyce says it has been a “great experience” training with the squad so far, and believes “hard work” on the pitch earned him a place on the plane to Italy. “We trained in the FAI National Training Centre in Abbotstown and have been learning tactics and studying the game in Jackman Park in Limerick over the past few weeks. The warm up games against Bohemians and Northern Ireland were tough and to a high standard, but we are confident going into the tournament and hopefully we’ll qualify for the finals,” the 27 year old tells South Tipp Today.

Clonmel Celtic are “delighted” with Joyce’s selection. The centre/right midfielder has been involved with the local club since he was a schoolboy and was part of the Clonmel Celtic squad that won its very first piece of silverware at junior level when they secured the Tipperary Cup in 2009. “He is an example to every child that joins our club of the rewards hard work and determination can bring,” Clonmel Celtic underlines.

“Since then his influence on the team has grown and he played a pivotal role in a very successful period for the club that saw them win the TSDL Premier League title in 2013 and 2015, further Tipperary Cups in 2011 and 2015 and a Munster Champions League title in 2013. During this period the club also reached a Munster Junior Cup final (2013) and the FAI Junior Cup semi-finals on two occasions, in 2012 and 2015.

“David is a hard working midfielder who gives his all every time he takes the field. The club is delighted with his international recognition and we’re sure his experience in Italy will live long in his memory,” the club continues.

Manager Davis says the response from the players in training has been “excellent”. He adds that the experience in the squad compliments the hunger and desire from the new players.

Pictured above is St. Michael's Jimmy Carr captaining the Republic of Ireland amateur side in a friendly against Northern Ireland recently.