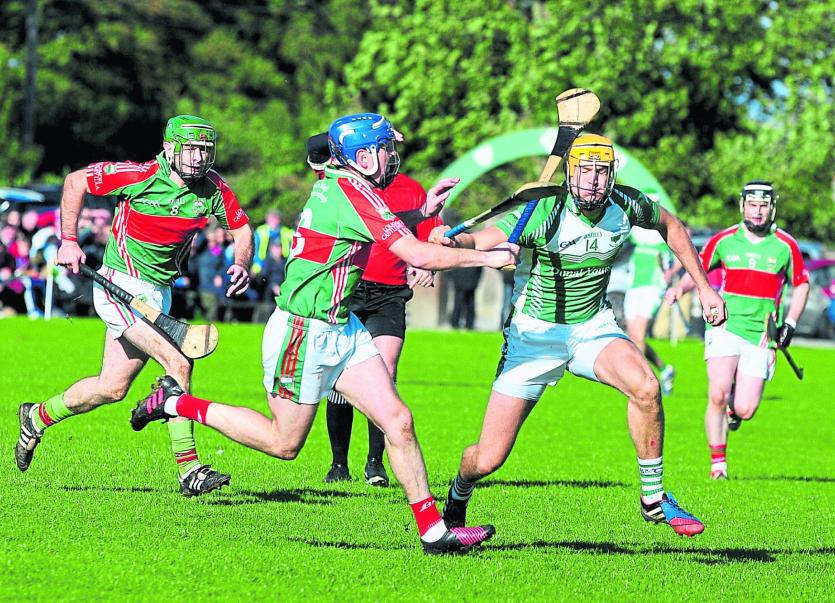 Séamus Callanan made a telling contribution to the Drom & Inch cause on Sunday. Photo: Eamonn McGee

A frantic finish to the Tipp programme of fixtures will ensure that the county honours it commitments on the provincial stage - the County Board are on course to have the respective champions ready in time to fulfill all Munster club games.

Following a request made by County Board secretary Tim Floyd the Munster senior club quarter-final against the Waterford champions was pushed back to Sunday, October 30th and now, it seems, that Tipperary, with the senior quarter-finals taking place this weekend, are well-positioned to complete the championship.

The county final, provisionally scheduled to take place on Sunday, October 16th, should take place in good time for the Premier champions to take their place on the provincial stage.

The preliminary quarter-finals of the 2016 Tipperary Water County Senior Hurling Championship caught the eye on Sunday last as Borris-Ileigh beat Burgess (1-17 to 1-13), Mullinahone got the better of a dogged Ballina (0-19 to 0-16) and Kilruane walloped Carrick Swan 5-27 to 0-6 while Drom & Inch edged the game of the weekend 1-16 to 0-18 against Loughmore.

The senior championship switches up a gear or three this weekend when the quarter-finals take place at Semple Stadium, Thurles.
On Saturday, October 1st (throw-in 1.30pm) Killenaule face Kilruane MacDonagh’s while at 3pm three in-a-row chasing Thurles Sarsfields take on Borris-Ileigh.
Meanwhile on Sunday the 2pm contest between Mullinahone and Clonoulty-Rossmore whets the appetite while at 3.30pm Kiladangan and Drom & Inch feature in the game of the weekend.

INTERMEDIATE
The final of the intermediate hurling championship is planned for October 23rd with the winner of that contest scheduled to take their place in the provincial semi-finals on November 6th.

JUNIOR A
There is some leg room to play with on the junior A football front - the presence of the Tipperary champions is not required in Munster until the semi-finals on November 20th while the county final is scheduled for November 6th.

The junior A hurling final is fixed for October 30th in good time for a Munster semi-final on November 13th - one of the competition’s quarter-finals take place this Saturday when Clonoulty-Rossmore face Loughmore-Castleiney.

SENIOR FOOTBALL
The senior football championship swings back into action on October 5th when the preliminary quarter-final meeting between Drom & Inch and Aherlow Gaels takes place - there is also a potential fixture down for decision between Galtee Rovers-St Pecaun and Cahir; this preliminary quarter-final will only be required should Cahir beat Clonmel Commercials in the South senior final this weekend.

Meanwhile on Sunday evening the CCC made the draw for the quarter-finals proper of the Tipperary Water Senior Football Championship: Arravale Rovers v champions Clonmel Commercials, Kilsheelan-Kilcash v Ballyporeen, Loughmore-Castleiney v Galtee Rovers or Cahir and Moyle Rovers v Aherlow Gaels or Drom & Inch.
Those quarter-finals will take place on the week-ending Sunday, October 16th, the semi-finals are scheduled for the weekend of October 23rd and the final for the week-end of October 30th.

The Tipperary champions will face into a Munster semi-final on November 13th.

Please spare a thought during the coming weeks for Competitions Control Committee (CCC) chairman John Devane and CCC secretary Tom Maher - the members of the CCC have had their work carved out for them since Tipperary beat Kilkenny in the All-Ireland final.