A series of setbacks scupper chance of 100% finishing record 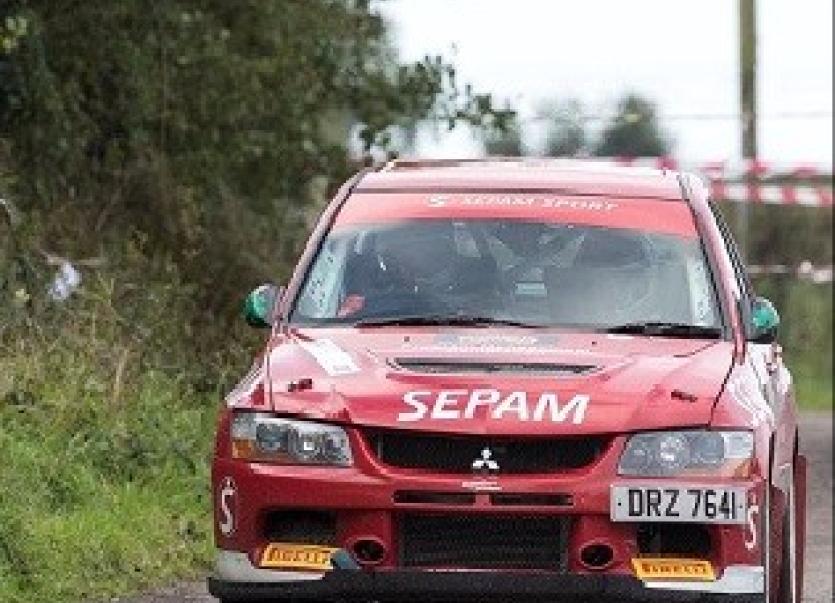 Cork was the destination for the final round of the Clonakilty Blackpudding Irish Tarmac Championship which featured Tipperary duo in action.

Cork was the destination for the final round of the Clonakilty Blackpudding Irish Tarmac Championship; the Acesigns Cork 20 International Rally. Team Sepam Sport entered one car for Clonmel’s Gus Kearney, partnered as always by Kilcommon co-driver Tommy Hayes. The 2nd Sepam Mitsubishi Lancer of Gus’s brother Pat Kearney and navigator Alistair Wyllie was absent for this event due to business commitments.

Gus and Tommy started the event with the aim of finishing the season on a high, having encountered various misfortunes throughout the season, but despite this maintaining a 100% finishing record in the championship. They started the event in a confident mood, and settled into a good pace, aiming to, in their own words “have real go” on the final event of the series.

However, this was not to be, as transmission failure at the startline of SS3 ended the Tipperary crew’s 100% finishing record, and more heartbreakingly, an early end to their final outing of the season.

Despite this non finish, Gus and Tommy have secured 2nd in the Grouo N category of the Clonakilty Blackpudding Irish Tarmac Rally Championship, with Pat and Alistair finishing 3rd in the category. A further bonus was the fact that the Clonmel brothers have also tied up 2nd and 3rd in the Group N class of the FIA Celtic Rally Trophy.

None of the results throughout the season would be possible without the support and back up of a great team.  A big thank you to Gerry McGarrity Motorsport for preparing the cars all season; to Gerry, Dermot, Damien and a sorely missed Gareth (RIP).

The families and friends of all Team Sepam Sport crews have been invaluable in their support and encouragement throughout the highs and lows of the season, so a big thank you for all your support this year, on the stages, in service and even on Facebook.

The Clonakilty Blackpudding Tarmac Championship took a brave step into the unknown this season, and it has proven to be an inspired move, gifting competitors and fans alike with a thrilling season long battle for the title. Well done to the committee and all the TROA events for making this a season not to be forgotten; the first of many no doubt.