South Tipperary side too strong for Nenagh 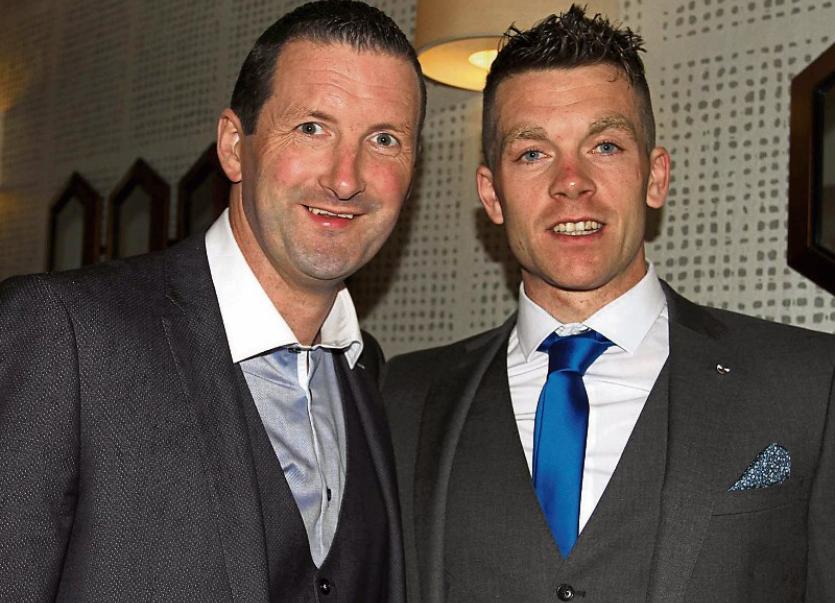 Former county goalkeeper Brendan Cummins hit five points from frees for Ballybacon-Grange as the South side romped home very comfortable winners over a disappointing Eire Og, Nenagh in the Tipperary Water county junior A hurling quarter-final at Holycross on Saturday.

It was a considerable contribution from the former All-Star (pictured with Tipperary defender Paudie Maher) who, apart from one save late in the second half, had a trouble-free afternoon, never really being asked any questions by a misfiring Eire Og Nenagh side. The only damper on a fine afternoon’s work by Ballybacon was an injury to Tom Kirwan early in the game. He limped through to forty two minutes before being called ashore and they will be hoping he will be fit for the upcoming semi-final.

The merit of the Ballybacon win is beyond question. They were never headed in an entertaining encounter, having set out their stall early on, but it was not until the last quarter that they really put their stamp on the game, three long range points from frees by Brendan Cummins, killing off the Nenagh challenge.

Eire Og finally settled into the game, and with points from Brendan O Brien, Gary Howard and David Hackett, they drew level by the 12th minute.

Ballybacon did not panic however and they regained the initiative, a brace of points each from O Regan and Lonergan pushing them four ahead by the 20th minute.

The advantage ebbed and flowed in delightful fashion, and now Nenagh came back for points by Hackett and Howard. They ought to have had another but an attempted short-free from the half-way line, went astray, Ballybacon’s Brian Dillon punishing the error with a sweet point. On the stroke of half-time David Hackett pointed a free for Nenagh but it was Ballybacon whl had the advantage at half-time,0-9 to 0-7

It was a hard game to call at this stage but inside five minutes of resuming, Ballybacon had extended their lead to four points with scores from O Regan and Lonergan(2),Brendan O Brien replying for Nenagh. In the next few minutes the sides shared four points leaving Ballybacon four clear going into the last quarter.

Nenagh needed a goal, one felt, but apart from an effort by Darragh Walsh which went wide in the 47th minute, they never really threatened Brendan Cummins in the Ballybacon goal. Cummins was the man of the moment with three fine long-range points putting the game out of the Nenagh lads’ reach, and he and Michael O Sullivan added further points before the finish leaving Ballybacon nine clear when John McCormack called time.

It was a big win for Ballybacon who must entertain justifiable hopes of going all the way in this championship. They are a strong, competitive side, who, if they had a bit more finishing power, would indeed be most formidable opponents. Eleven of their points in this game came from frees, and with Daniel O Regan, finishing with four from play, the scoring rate of their colleagues needs to be upped.

O Regan looked the best forward on the field but Brendan Cummins’ contribution of five points from frees must be something of a milestone for a goalkeeper. Aaron Lonergan was very accurate with the close-in frees, six of his seven points coming from placed balls. Brian Dillon, Eoin Walsh, and Aaron Cowan were others to catch the eye.

Nenagh’s display was disappointing. They could have done with last week’s postponed North final clash with Kiladangan to get them up to match intensity and their difficulty now will be to keep the team motivated as they wait for the rescheduled North final. They fielded a very young side, it’s strength depleted by losses to the senior squad and their inexperience showed. Sean Geaney, Alan Kelly, Gary Howard, Niall Madden, Cliff Maloney and Brendan O Brien did their utmost to get their colleagues moving.