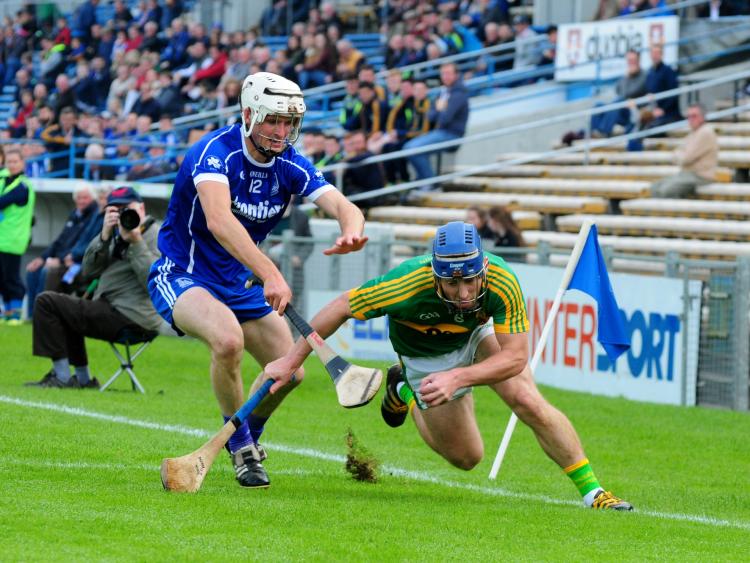 The mighty Thurles Sarsfields are odds-on favourites to land a 35th county senior hurling title following their semi-final win over Clonoulty-Rossmore on Sunday - the Sars are now chasing their sixth title in eight years (2009, 2010, 2012, 2014 & 2015).

On Sunday afternoon in Semple Stadium Sarsfields cruised to a 1-22 to 0-15 win over the West champions while Kiladangan caught the eye of many observers with a comprehensive 2-16 to 0-13 semi-final win over Killenaule. Kiladangan progressed to their first final appearance since 1938 thanks to a performance which featured two Joe Gallagher goals.

Thurles Sarsfields will now face the North champions Kiladangan in the Tipperary Water County Senior Hurling Championship final on Sunday, October 16th at 3.30pm - should the Blues prevail they will replicate a feat last achieved by Sarsfields in 1963-65 when Thurles last placed three consecutive titles back-to-back. Standing in their way, however, is an ambitious Kiladangan outfit. Indeed, next Sunday’s final is sure to attract a bumper crowd.

And, you could not ask for a better curtain raiser at Semple Stadium, Thurles next Sunday - make sure to get in early and take the county minor A hurling final between JK Bracken’s Óg and St Mary’s Clonmel while the Cashel King Cormacs team will be introduced to the crowd in honour of their 1991 county final triumph.

On Saturday Galtee-Golden stunned Clonmel Commercials when wining the Tipperary Water County Minor A Football Championship final 1-12 to 0-14 in Cahir while Cashel King Cormacs helped themselves to the B title thanks to a 2-8 to 1-7 victory against Kilsheelan- Kilcash.

Last weekend Loughmore-Castleiney, thanks to an impressive win over Clonoulty-Rossmore, booked their place in the last four of the Tipperary Water County Junior A Hurling Championship. The three remaining quarter-finals were played over the weekend with Ballybacon-Grange getting the better of Nenagh Éire Óg (0-20 to 0-11), Kiladangan beating St Patrick’s (2-20 to 2-14) and Holycross-Ballycahill seeing off Emly 3-19 to 3-12. The semi-finals are expected to take place on the week-ending October 23rd and will see Kiladangan face Holycross-Ballycahill while Loughmore-Castleiney and Ballybacon-Grange also meet.

The final four is also now known for the Tipperary Water County Intermediate Hurling Championship. On Saturday Thurles Sarsfields required extra-time to beat Ballinahinch (1-25 to 2-20), Lattin-Cullen Gaels saw off Moyle Rovers (2-14 to 0-15), Seán Treacy’s beat St Mary’s Clonmel (0-16 to 0-14) and Newport surged to an impressive 5-14 to 0-6 victory over Kilsheelan-Kilcash. The semi-finals are scheduled to take place on Saturday, October 15th. Dundrum will host the clash between Lattin-Cullen Gaels and Newport at 2pm while Thurles Sarsfields and Seán Treacy’s will feature in the second part of an attractive double header at 3.30pm.

There was plenty of drama is the relegation play-offs which took place on Sunday. In the senior play-offs Silvermines beat Moneygall 1-21 to 2-13 at Toomevara and thereby relegated Moneygall to the intermediate grade (Moneygall lost their opening round game to Knockavilla-Donaskeigh Kickhams). Meanwhile in Holycross Knockavilla drew with Moyne-Templetuohy (3-12 to 1-18). Silvermines (four points) now top the play-off group and are assured of their senior status for 2017 while Knockavilla (three points) and Moyne (one point) are still alive. In the final round of group games Knockavilla face Silvermines and Moyne take on Moneygall. In the intermediate hurling championship relegation play-offs Cashel King Cormacs beat Moycarkey-Borris 1-22 to 0-13 and Golden-Kilfeacle beat Rockwell Rovers 2-22 to 3-10.

Moycarkey-Borris placed county under-16A titles back-to-back on Saturday when the Mid champions beat Toomevara 3-22 to 2-11 while in the B final Carrick Davins-Skeheenarinky saw off Emly-Seán Treacy’s 2-16 to 2-5.

On Sunday Borri-Ileigh and Burgess-Duharra fought to a stalemate in the county senior Camogie final at The Ragg (1-10 to 0-13) - the replay is expected to take place this weekend.

Meanwhile in the Ulster Bank League Nenagh Ormond registered another impressive 18-8 Division 2A win over Queens University while a battling Cashel RFC side lost 13-22 away to Sunday’s Well.

And, there was highly-encouraging news among the junior ranks for Tipperary teams. In Division 1 Kilfeacle & District beat Bandon (21-15), Clanwilliam won away at Clonakily (34-21) and Clonmel beat Richmond (30-9) in Limerick while in Division 2 Thurles RFC returned to winning ways thanks to a 29-18 victory over Presentation.