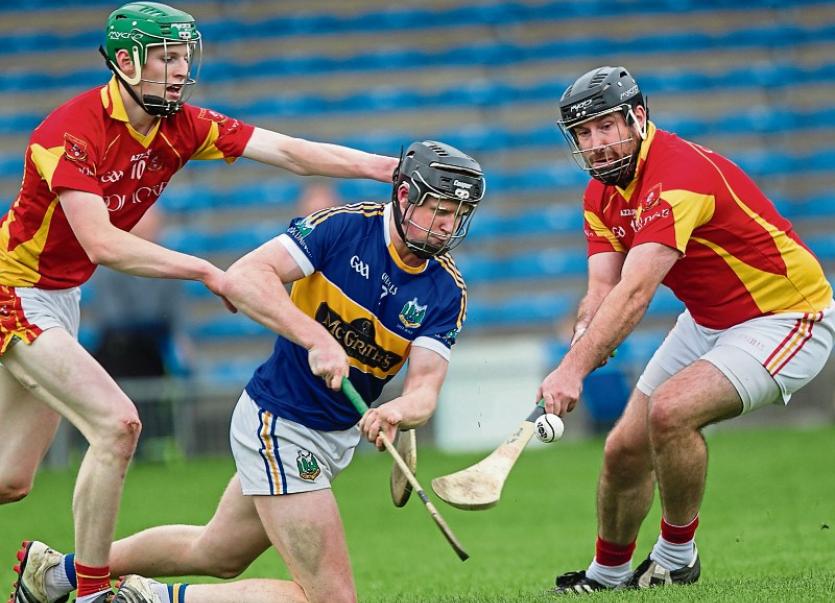 Back in 1938, with Europe and the world on the brink of a catastrophic war, Thurles Sarsfields and Kildangan did battle in the county hurling final.

The game was played at Borrisoleigh on September 25 where the ‘Blues’ doled out a 7-7 to 2-2 trouncing to the Puckane club.

Now, a lifetime later – 78 years to be precise – we have a reprise. In the thirties the North champions met a golden generation of Sarsfields’ players and they proved too hot to handle. Sars’ won four of the five county titles between 1935 and 1939. Fast forward to the present generation and they’ve won five of the last seven Dan Breens.

History then has an ominous feel for Kildangan as they prepare to face the hottest of favourites in Sunday’s final.

The semi-finals were disappointing. Ten and nine point wins respectively suggest decisive outcomes with neither game holding any tension or doubt into the final quarter. We’ll hope that something better in the final will redeem a championship that overall has been lacklustre.

The Kildangan/Killenaule game was expected to be the tighter of the two with the novelty factor adding to the appeal. Yet even here it tailed off badly - once Joe Gallagher landed his second goal the business of the day was done with still eleven minutes to play.

The big disappointment for Killenaule was the failure of ‘Bubbles’ to impact on events. If you were told in advance that one of the heroes of September 4 would contribute a mere three points, all from frees, then you’d be off to the bookies to back Kildangan.

He’s not alone, of course, Seamus Callanan was similarly ineffective in the quarter-final. The problem for ‘Bubbles’ is that on days like this he gives off a vibe of disinterest, which may be unfair to the player - and the defence that has stymied his efforts. Being just another player on the county team is one thing; with the club you’re the main man, which brings its own pressure.

In some ways it was a strange game that hung in the balance for long spells with neither side able to conclusively nail it down. David Sweeney, a county minor and U21 panelist in recent years, was deployed to mark ‘Bubbles’, but it was essentially one moment of brilliance from Joe Gallagher, which separated the sides at the break. He out-fielded Joe O’Dwyer and with open space in front of him got close enough to leave Jonathan Gleeson helpless in the Killenaule goal.

Killenaule’s nine first half wides were a significant part of the narrative too at this stage though the third quarter had an almost eerie feel to it with neither side looking either willing or capable of grasping the initiative. One waited for a bit of ‘Bubbles’ magic to unlock the tie but again it was Joe Gallagher who delivered the knock-out. This time there was another aerial fetch as the defender stumbled and then the finish past the advancing goalie. Game over.

It will be one of what ifs from Killenaule: if Tony Doyle had finished their best move of the day in the first half instead of missing the target; if even a percentage of those wides had found the range; if only ‘Bubbles’ had conjured one or two pieces of characteristic magic.

All of which is pointless now. In truth Kildangan looked the more compact side. Two little cameos near the end summed up the day’s fate for Killenaule. ‘Bubbles’ had a twenty metre free deep into injury time and he rattled the shot off the post. Some moments earlier he was unmarked as the ball came his way but incredibly it bobbled between his feet and in to a defender. On days like this, as Nicky English once remarked, it could be raining soup and you’d have a fork in your hand.

The opening game had a wearisome inevitability about it. There was a little pocket of activity there in the middle of the first half where Clonoulty drew level but that was really the peak performance from the West champions. In truth Sars’ could have hit a few goals in that opening spell and the game would have been over early. Declan O’Dwyer denied them on one occasion stopping a Conor Lanigan shot; other times it was Sarsfields’ failure to find that finishing touch from promising positions which kept the game open.

When Billy McCarthy set up Ritchie Ruth for the game’s only goal eleven minutes into the second half it effectively closed off this tie. In truth Clonoulty did well to keep the margin to ten points, Ronan Heffernan stepping up with three in the final ten minutes. A poorly hit ‘penalty’ by Timmy Hammersley didn’t affect the outcome but would have delayed the inevitable a bit longer.

I felt in advance that Clonoulty are cohesive enough in defence but lacking firepower in attack. On Sunday their starting forwards scored four points between them, albeit against the stronger end of the Sarsfields’ team.

It all ended on a sour note for Clonoulty with Sean Maher red carded for a nasty swipe on Paudie Maher near the end.

So, the final on Sunday brings together a fresh pair. Sarsfields are unattractively listed at 1/5 with bets of 3/1 available on Kildangan. It suggests a mis-match though Kildangan come to the final with solid credentials and hopefully will challenge those expectations.

The progress of the North champions has been steady and incremental. In 2004 they earned senior promotion on the back of a county intermediate win. Incidentally they expanded on that success by shocking Carrickshock in the All Ireland final the following March with two injury-time goals. Darragh Egan hit the first of those majors with Conor Hayes adding the second. Not too many of that side will be in action on Sunday. Dan Hackett, centre back then is now team manager, with the side coached by ex-Galway player, Sean Treacy.

Since that 2004 breakthrough they hit the North jackpot in 2008 with a first senior title since far-off 1943 and then had follow-up wins in ’13, ’15 and ’16. So their arrival at county final day hasn’t been exactly out of the blue, though there’s no doubt they’ve got comfortable in Semple Stadium this year in a way that eluded them previously.

In previous years there was a view that Kildangan were porous at the back but this time they’ve looked very solid with Hughie Flannery and Alan Flynn forming the central spine. Fergal Hayes has caught a lot of eyes at corner back and of course David Sweeney did a valuable job on ‘Bubbles’ last week. Goalie Barry Hogan was on the county minor winning panel this season and showed his worth against Drom in the quarter-final. The difficulty for this defence against Sarsfields is that there are so many shooters to watch in that ‘Blues’ attack.

Kildangan’s midfield has been industrious in recent games and their attack has been hitting decent scores - 2-18 against Drom, 2-16 against Killenaule. Darragh Egan remains a significant player, not the fittest looking but strong in the air and with great scoring hands. The Gallaghers, Ruairi Gleeson and Paul Flynn can all score too but they’ll face their toughest test yet against Sasrsfields’ defence.

That Thurles defence looks really formidable. With Denis Maher back at half back beside the brothers, Ronan and Paudie, it’s quite a bulwark against any team. Billy McCarthy did better on Sunday when brought to midfield while their attack has a lot of neat touches and deft movement, though perhaps not the most physical unit.

So Sarsfields go in as red hot favourites and in truth it’s difficult to build a compelling case for Kildangan. Still I expect the North champions to push them close before coming up short in the end.

The minor final which opens proceedings will be a novel event. J.K. Bracken’s made the big breakthrough this season in the Mid and will be fancied to topple defending champions, St. Mary’s of Clonmel. Unfortunately the South had to nominate which has left some clubs, such as Killenaule, peeved. It could be an interesting South series later.

Finally the relegation issue has generated its own controversy ahead of the final round of games. Kickhams face Silvermines in their final game at the weekend with Moyne to play Moneygall later. The problem is that Silvermines are already safe and Moneygall already relegated so effectively you have two dead rubber games left to decide whether Kickhams or Moyne will be relegated with Moneygall.

To say it’s unsatisfactory would be the understatement of the year. Essentially the problem is that score difference may well decide who drops and who stays up and in dead rubber games scores can vary hugely because only one side has any motivation to put in an effort.

In a nutshell if Kickhams lose to Silvermines and Moyne beat Moneygall then Kickhams and Moyne are tied on three points each with score difference left to decide which is relegated. In advance of the final round of games Kickhams have a six point score differential advantage on Moyne, which in hurling terms is very little.

In my view a major mistake was made with the second round games where surely the first round winners should have played off and also the first round losers. On known form that was likely to leave Kickhams and Moyne in a winner-takes-all final game instead of the present mess. Of course a Kickhams win, or draw, on Sunday will avoid the use of score difference. The round robin idea seemed a good one in advance; it now seems very flawed indeed.