Game ends early due to injury to referee but result stands 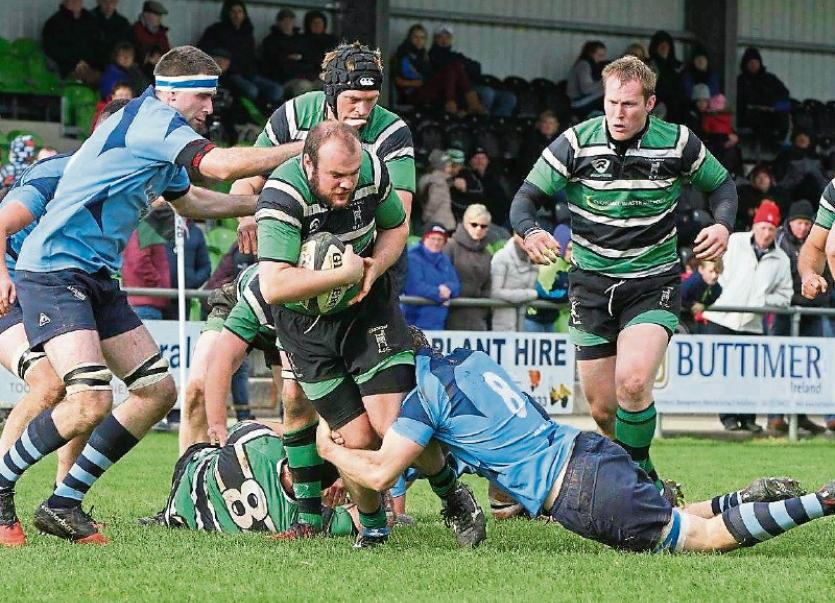 On a clear but windy Sunday afternoon, Clonmel RFC went to battle with local rivals Kilfeacle and won 20-3.

The game ended early following an injury to the referee but enough time had been played for Clonmel to claim the victory.

After a reverent minute’s silence in honour of the late Anthony Foley, the two teams took to the pitch eager to build on recent good form.

Kilfeacle had the better start, using the wind cleverly to secure an early penalty which was slotted away to give them an early lead which buoyed the vociferous travelling support.

In fact it took Clonmel a whole 20 minutes to get onto the score board against a resolute Kilfeacle defence.

Conor Cooney slotted the penalty from the ten-yard line into the wind. Kilfeacle worked hard to put pressure on Clonmel at scrum time and won a free kick for early engagement.

This bolstered their spirits and allowed them to push their way down into the opposition half. Hard driving by the forwards saw them camped on the Clonmel line.

They finally crossed the whitewash only to have the try disallowed for a double movement. This seemed to be the wakeup call that Clonmel needed and for the next 40 minutes the home team dominated the scoreboard if not the game.

A strong maul from the lineout saw John Gallagher break into the Kilfeacle 22. Quick recycling saw scrum half Jaco Oosthuysen dart for the line to score.

A mightily relieved Clonmel went in at the break with an 8- 3 lead.

Clonmel now had the wind but used it cautiously. A searing break saw their young scrum half break and make a delightful break ably supported by Dylan Cadogan who received the offload only to be forced into touch. Disruption to the ensuing setpiece saw Clonmel prop Mark Corby make a huge break for the line to score Clonmel’s second try.

Clonmel had the bit between their teeth now. They continued to pile on the pressure. A shooting break by skipper Tony Cantwell to the line was recycled only to be knocked on.

After the subsequent scrum, quick hands from a clever quick lineout by Conor Cooney saw the ball break to the far wing where Luke Hogan danced his way through the defence to score.

This left Clonmel with a 20 points to 3 lead. Kilfeacle are a proud team and piled on the pressure on the Clonmel line. A succession of penalties saw a yellow card go to a Clonmel forward. Kilfeacle sniffed blood and their forwards battered the Clonmel line with no success. Great defence by the fourteen men in Green and Black saw them stand firm.

Then on 72 minutes, an accidental collision saw the referee fall to the floor injured. Unfortunately, he was unable to carry on and the game had to be abandoned. According to the rules of the game, enough time in the match had been played in order for the result to stand as it was.

Both young teams contributed to a highly energetic and spirited game of rugby. This also left Clonmel sitting on top of the league as the only unbeaten team so far.

Clonmel’s next match is the first round of the All-Ireland cup at home to De La Salle Palmerston on Saturday next at 2:30.