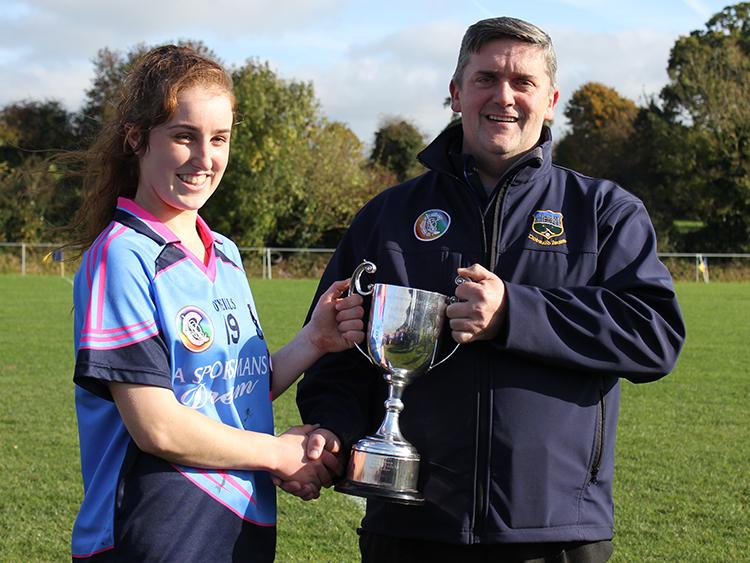 Nenagh Éire Óg grabbed the county intermediate Camogie title on Saturday at The Ragg thanks to an eight-point win over Drom & Inch.

Éire Óg set a terrific example to clubs across the county. Following years of neglect of the game an ambitious Camogie club was formed in recent years and steady progress was made - the Blues won the junior B county title in 2013, the junior A title in 2015 and have now graduated to the senior ranks.

Although Nenagh had lost the league final to Drom & Inch and shipped a heavy defeat to Silvermines early in this competition Éire Óg re-grouped, beat the ‘Mines in a recent semi-final and proceeded to dominate Saturday’s decider. Indeed, Éire Óg were really good value for this win. Grace O’Brien, who notched 1-12, proved the star, but Éire Óg would not have won this encounter without excellent full-back Aileen Duggan and a half-forward line who worked themselves into the ground - Aisling O’Brien, Ciara McGrath and Eimear Ryan did the work required to win this game while Grace O’Brien determined by how much.

Catriona Shortt, Niamh Long, Niamh Ryan and Gillian Gleeson were outstanding from Drom & Inch and it was Gleeson who presented her side with an initial lead in the sixth minute. Éire Óg, however, responded with 2-5 without reply.

Following good work from Rachel O’Connor in the middle of the field Grace O’Brien tied the game off her right before adding a converted free following a foul on Caroline Browne. Louise Hickey was alert to an opportunity in the tenth minute - when Grace O’Brien’s free dropped short Hickey was on hand to flick home for the opening goal of the game.

Three minutes later Éire Óg carved Drom & Inch open - this time Caroline Browne provided the assist and Grace O’Brien buried a left-hand shot in the roof of the net. Ciara McGrath, who was in determined mood, drilled over another Éire Óg point before Grace O’Brien added two more (one free) to present her side with a 2-5 to 0-1 lead by the 19th minute.

Drom & Inch withdrew a player to the middle third of the field in order to stem the blue tide and left Nenagh full-back Aileen Duggan free in the heart of the Éire Óg defence. The move yielded an early dividend as Niamh Ryan fired over an impressive free in the 20th minute. Almost immediately Éire Óg hit back when Ciara McGrath set up Grace O’Brien for another point.

In the 23rd minute Drom & Inch were left cursing their misfortune when Katie Bourke pulled on Catriona Bourke’s long-range free, but Katie’s rasper flew narrowly wide. Niamh Ryan set up Gillian Gleeson for an excellent point in the 28th minute, but Éire Óg closed out the half with a brace of Grace O’Brien points (one free) and led 2-8 to 0-3 at the break.

Grace O’Brien and Catriona Shortt traded placed balls during the opening minutes of the second half as Drom & Inch, who were now playing with the breeze, opted to employ an orthodox formation.

A crucial moment materialised in the 37th minute when Ruth Hassett recovered in time to block the raiding Niamh Ryan and then, just seconds later, Sarah Quigley’s reaction save denied Ryan once more.

A Grace O’Brien free left 12 between the sides before Drom narrowed the deficit thanks to two Niamh Ryan frees. Grace O’Brien cracked over the score of the game off her left in the 45th minute following a pin-point Hazel McAuliffe delivery before Drom & Inch happened upon a little good fortune when Niamh Ryan’s long-range free snuck in under Sarah Quigley’s crossbar. Éire Óg were in determined mood, however, and responded with two Grace O’Brien strikes (one free) within 53 seconds of that three-pointer.

With ten minutes to play Drom & Inch struck for a second goal - Niamh Ryan fired home following a scramble in the Éire Óg goalmouth to leave seven points between the teams.

Éire Óg, however, closed out this final in an assured manner with a point from Eimear Ryan concluding the scoring. Drom & Inch were denied a third goal in the 59th minute when Aileen Duggan bravely blocked a Katie Bourke strike.

Nenagh Éire Óg will face Waterford champions Gailltír in the AIB Munster Intermediate Camogie Championship final on Saturday, November 12th at a time and venue to be confirmed.