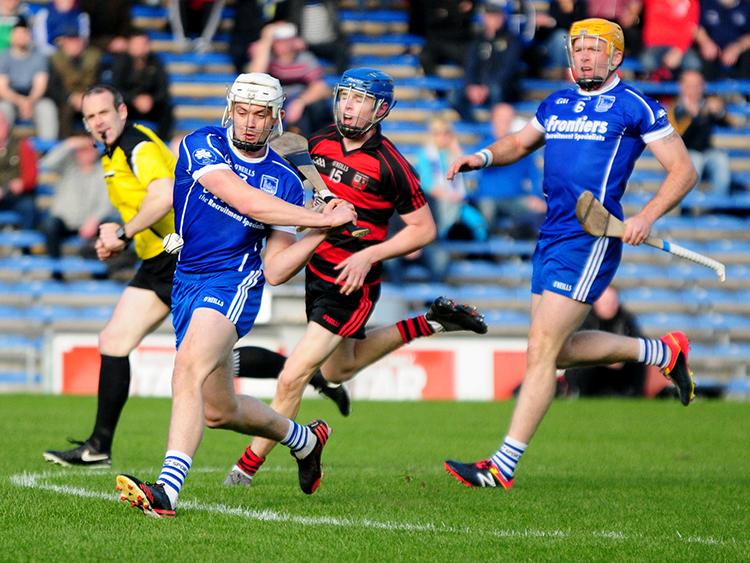 Ballygunner rallied from four points down (0-11 to 0-15) in the 50th minute to draw level in the 62nd minute before Bourke was presented with the opportunity to book his side a semi-final date with first-time Clare champions Ballyea in the 64th minute. The late winner must have proven doubly satisfying for Bourke who missed a penalty in 32nd minute. Besides Pa Bourke Stephen Cahill starred as did Pádraic Maher, Ronan Maher, Stephen Lillis, Stephen Maher and Billy McCarthy.

A really poor crowd of just 2,257 were in place when referee Johnny Murphy checked his watch and turned to face four jostling midfielders. And, those who chose not to be there missed a game of real quality. The striking, tackling and the strategy employed by the respective sides in this contest was of the very highest order. Indeed, it was fascinating to watch how Thurles and Ballygunner went about their attacking endeavours while Pádraic Maher and Philip Mahony were left free at either end of the field.

Both sides worked the ball carefully forward and while traditionalists might bemoan the lack of shooting chances and breaks around the goal such systems do ensure that you create a better quality of shooting opportunity against elite defences.

A Pauric Mahony free presented his side with an early lead before Ballygunner re-cycled the ball out of the corner expertly to where David O’Sullivan flashed a shot over the bar. Thurles responded with a brace from Pa Bourke (one free), but Sarsfields then steered three shots wide before Harley Barnes created the chance for Peter Hogan to edge the Waterford champions into 0-3 to 0-2 lead in the tenth minute.

Following a great grab from Ronan Maher Stephen Cahill tied it up with a left-handed long-range strike, but Shane O’Sullivan soon cancelled that out. Sarsfields, however, were settling into their game and hit four points without reply to take a 0-7 to 0-4 lead as early as the 16th minute. Pádraic Maher won a vital interception and assisted Ronan Maher in a monstrous long-range point off his left to tie the game before two efforts from Stephen Cahill and another from Lar Corbett following terrific work from Richie Ruth left three between them.

Having conceded 0-4 without reply Ballygunner needed a little encouragement and welcomed two Pauric Mahony frees which closed the gap to one. A Pa Bourke free with five minutes to play in the half brought nine scoreless minutes to a close for Thurles before Sarsfields needed to call on goalkeeper Paddy McCormack to make a good stop from the raiding Peter Hogan who had picked the pocket of Michael Cahill in the 25th minute. Although Hogan delivered his shot at a good height from McCormack’s point of view the Thurles ‘keeper’s save and bat away was top class.

A minute later Stephen Lillis made a great supporting run to collect a return pass from Denis Maher and landed a lovely point off his right while in first half injury time a Pauric Mahony strike (free) left two in it at the break (0-9 to 0-7).

With Ballygunner now playing with the aid of a breeze Thurles needed to make a positive start to the half and did so when Pa Bourke’s long-range free dropped short and Philip Mahony pulled Conor Lanigan back as the Sarsfields corner-forward attempted to gather the break. Referee Johnny Murphy awarded a penalty, but, sadly, the ball refused to rise smoothly for Pa Bourke and his pull was gratefully gathered by Stephen O’Keeffe in the Ballygunner goal.

Three minutes later Thurles Sarsfields missed out on another gilt-edged opportunity when Stephen Cahill pointed - during the build-up to this effort Aidan McCormack failed to notice the blind side run of the unmarked Lar Corbett (0-10 to 0-7).

Although Ballygunner marked the opening of the second period by dropping three shots into the hand of Thurles ‘keeper Paddy McCormack the Waterford lads opened their second half account with a Harley Barnes effort in the 35th minute.

Two minutes later Ballygunner looked to have created a goal-scoring opportunity of real note when Wayne Hutchison picked out Brian O’Sullivan, but Stephen Lillis kept his cool, boxed out his man and forced an over carry expertly.

Pauric Mahony left one between them in the 40th minute when converting his fifth free of the afternoon before Sarsfields pieced together an outstanding sequence of hurling when Pádraic Maher and John Maher combined to set up Ronan Maher’s second point of the afternoon. Aidan McCormack added another off his left and Thurles led 0-12 to 0-9.

Ballygunner responded to the challenge with points from David O’Sullivan and Brian O’Sullivan, but Thurles Sarsfields were hurling terrifically well and surged four clear thanks to a terrific effort from Denis Maher and a Pa Bourke brace. One of the Bourke strikes came via a placed ball while we were treated to an extraordinary moment in the 50th minute - Pa Bourke intercepted Stephen O’Keeffe’s loose delivery and narrowly failed to lob the Ballygunner ‘keeper in a superb illustration of quick thinking (0-15 to 0-11).

The Waterford champions hit back with a brace of Pauric Mahony frees before Ballygunner closed the gap to one in the 57th minute when Shane Walsh set up Peter Hogan to crack over a smashing point (0-15 to 0-14). It is worth noting that in the 55th minute Ballygunner threatened to score a game-breaking goal, but Pádraic Maher’s tackle put paid to Peter Hogan’s advance following sharp work from Stephen Power.

Pa Bourke won a terrific turnover deep inside the Ballygunner half with a minute to play and then had the presence of mind to make a clever run, accept a pass from John Maher and land Thurles’ 16th point of the afternoon.

Referee Johnny Murphy had signalled three minutes of additional time and Ballygunner set about their work - a Pauric Mahony free and a stunning long-range effort from the stick of four-point hero David O’Sullivan tied the game in the 62nd minute.

Then, in the 63rd minute, Billy McCarthy found the unmarked Tommy Doyle with a sensational 40-metre stick pass, but Doyle was a little careless with his shot which Ballygunner ‘keeper Stephen O’Keeffe deflected out for a ’65. Pa Bourke took on the responsibility of the pressure shot and delivered when drilling the winner into the breeze and over the bar.

The Thurles Sarsfields team and panel of players which beat Ballygunner on Sunday. Photo: Eamonn McGee