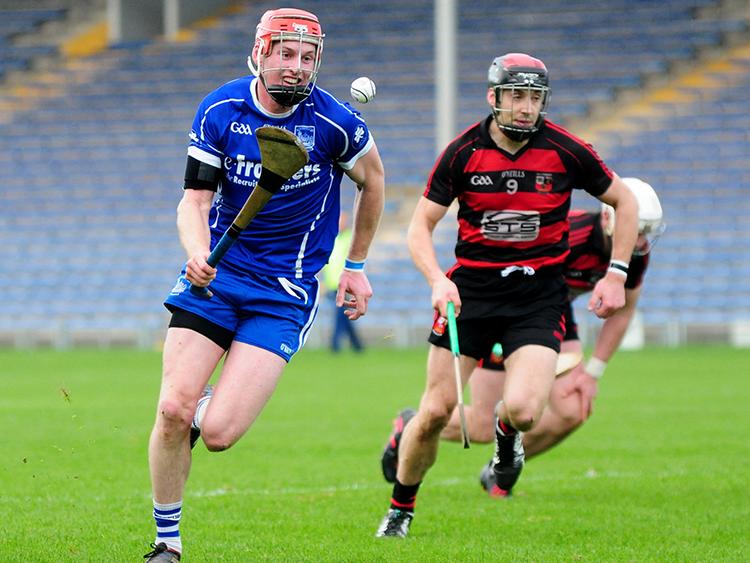 It is a mark of the man that as the celebrations continued around him Thurles Sarsfields coach Paddy McCormack spared a thought for the vanquished Ballygunner team - McCormack knows only too well how it feels to come out the wrong side of a tight contest.

Sarsfields won the AIB Munster Senior Hurling Championship quarter-final at Semple Stadium, Thurles on Sunday by a point (0-17 to 0-16), but the game could, so easily, have been wrenched in another direction and away from the Tipperary champions - a fact that was not lost on the Blues’ coach.

"We're delighted, but I am sure for Ballygunner that it is a difficult one to take; to be beaten by a point. I know that feeling and I know it only too well. We have lost in the first round for the last two years and we are delighted to get over the first round. But that only takes us into the second round,” Paddy McCormack said - coach McCormack is joined on the Sarsfields management team by manager Tommy Maher and selector Connie Maher.

"I am sure it was a good game for the spectators, but it is hard often times to judge it from the sideline. We knew coming here today that we were in for a big challenge. They won three in-a-row and we won three in-a-row (of county titles). We are all trying to win this Munster club, but it is very, very difficult. It was a fantastic game and it was a fantastic result for us. A couple of years ago we lost one of those in a similar way to Newtown-Shandrum, but today it just went our way. So, we are delighted.”

Paddy McCormack also reserved some special praise for Pa Bourke who drilled over a late, late ’65 to seal the win.

“Pa Bourke stood up to that late one even though the penalty did not go his way earlier on,” Paddy McCormack told the Tipperary Star.

“It reminded me of Ennis in an under-21 match a few years ago between Tipp and Clare when the goalkeeper came out outside the square, the referee gave a '65 and it was Pa Bourke again (who took it). It was a big score and he came up with it again today fair play to him."

"We know from two years ago playing Cratloe down there that it is difficult for any Tipperary team to get anything out of Ennis. But we are looking forward to it - that's where we want to be and that's what we are training since January for,” Paddy McCormack said as he considered the next test for his team.

"In the Tipperary championship there are 32 teams and over a seven-month period it is a long championship. And, you don't contest the Munster championship unless you come out of that. Our primary aim at the beginning of the year was to retain that Dan Breen (Cup) and then to see where that takes us. We looked at the Waterford champions all the week and that (result) has taken us into the semi-final of the (Munster) championship. We are looking no further than that. We are at the same stage that we were at last year when Na Piarsaigh (Limerick) beat us. We still have to go to Ennis and win to get to the final.”

Thurles Sarsfields will assess the injury shipped by corner-back Michael Cahill in Sunday’s clash with Ballygunner, but Paddy McCormack is hopeful that Cahill will recover in time to play a full part against Ballyea. Indeed, McCormack wished to praise the impact that inter-county players like Michael Cahill, Ronan Maher, Stephen Cahill, Aidan McCormack and Pádraic Maher have had on his team.

"It's easier to come back into club hurling when you win an All-Ireland; it is easier to pick it up, but they are just so committed it is unbelievable,” Paddy McCormack said with a proud smile.

“Even when they were hurling with Tipperary they would still be out to us - at every opportunity they had they would be out to us. They are great county players, but they are great club players as well. They are brilliant. Hurling is what they do - they do nothing else. I live beside the two boys (Pádraic & Ronan Maher); they are my nephews and they are always out beating balls off walls. There are more windows after being broken in that house. They are good chaps, but, look, so are those Waterford lads. They are absolutely brilliant people as well. All of these lads are great chaps because they give so much to the game and they give us so much entertainment.”

Pádraic Maher looked a relieved man on Sunday when Ballygunner’s final delivery forward in the 65th minute dropped into his grateful hand; Johnny Murphy’s whistle blew and Maher punched the air in glee. A serious contest had been won and he knew it.

"In fairness to Ballygunner they gave us some battle considering that they were playing week-in week-out for the last six or seven weeks so fair dues to them,” Pádraic Maher told the Tipperary Star.

“I suppose we would not be happy - we drove a lot of wides in the game; we seemed a little bit uneasy on the ball in the first half. We got balls 60 yards out and usually the lads would be banging them over so we have plenty to work on for next week. We are just happy enough to get through that.

"We have been here six or seven times before in the last number of years and we have only managed to get through it once (2012). We have been beaten in games like this before when we have been beaten by one or two points and, likewise, we have only won games by one or two points. So, there is nothing in the games and today proved that point. We have to use our experience. We have plenty of experienced guys there. Thankfully, we got through that today. We knew that we had to expect a big battle so we are just thrilled.”

For the majority of the game Pádraic Maher found himself playing a free role for Thurles Sarsfields as the sides mirrored one another from a strategic point of view. Indeed, Ballygunner’s Philip Mahony performed a near identical role at the opposite end of the field.

"We looked at Ballygunner and we saw that they work back without the ball and work forward with the ball as well,” Pádraic Maher explained.

“We just wanted to keep it shorn up at the back as well as we could and not leave too much space because they are a lively team. You play it as it comes during these kinds of games. Munster club matches are unreal games to play in and that showed again in how tight a game it was there today. So, we are absolutely thrilled.”

The thoughts of the Thurles Sarsfields players and team captain Pádraic Maher now turn to the formidable challenge posed by Clare champions Ballyea. Sarsfields, of course, will not look back on their most recent trip to Ennis fondly. In 2014 Thurles lost to Cratloe in a Munster semi-final at Cusack Park (0-14 to 1-18) when Denis Maher was shown a straight red card in controversial circumstances.

"It's down to Ennis and we have been there before against Cratloe a couple of years ago. I suppose we didn't do ourselves justice (that day) so we will be looking forward to the trip down there. We will get our bodies right again, get the recovery done and we will work from there,” Pádraic Maher added.

The Thurles team is littered with real competitors and although Sarsfields will have it all to do to get a win against the Clare champions the challenge to do so nourishes the very best guys. The challenge is the thing for players like Pádraic Maher.

“And, we know from different Tipperary teams down the years that going down to Ennis and winning is not an easy thing to do. We will relish the challenge. These games are great and if you can't rise yourself for these challenges you shouldn't be playing at this end of the year."

And, Pádraic Maher also had a special word of praise for Pa Bourke who edged this contest for Thurles at the very death when converting a ’65.

"In fairness he showed great guts there, but he is practicing those every day of the week and they are no bother to him. He showed great guts near the finish there and it was straight over the black spot,” Pádraic Maher said with a smile.

Ballygunner manager Denis Walsh cut a frustrated figure following referee Johnny Murphy’s final whistle at Semple Stadium on Sunday afternoon. The number of shots that his Ballygunner players dropped into the grateful hand of Sarsfields’ ‘keeper Paddy McCormack was on his mind.

"There was a few dropped in there which was disappointing, but in our last two plays there we dropped the ball straight down on top of Pádraic Maher which we had also done quite a bit in the first half. The players knew that wasn't within our mind-set coming into the game and we still did it,” Denis Walsh said.

“You have to factor that in and say that we had to work ball (forward). We did it in the middle section of the second half very well, but, look, that's what happens when you are under pressure. When you are trying to find something extra that happens. I did it myself plenty of times so I could not fault anyone on that."

"In fairness to our lads they dug in. We asked them to go to the well and they did that. I felt that if it had been a draw we were then in a great position to drive on. I felt that we had a bit of momentum if it had turned out to be a draw," Denis Walsh added.

"We were not even thinking about a Munster title. Today was only a quarter-final and Sars are a very good team. There is nothing going to be won soft and that game will stand to them let's be honest about it,” the Cork man said.