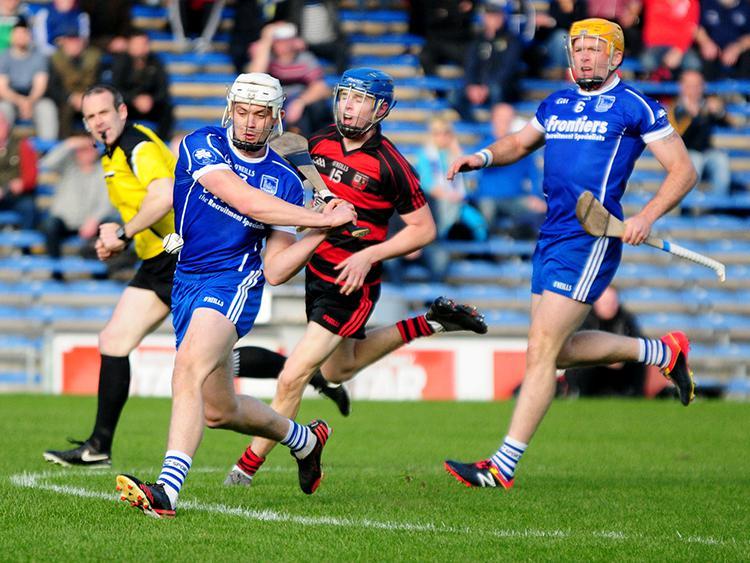 Loughmore-Castleiney will now eagerly look forward to an AIB Munster Senior Football Championship semi-final clash with Kerry champions Dr Crokes on Sunday, November 13th at a Kerry venue - on Sunday Dr Crokes beat Clare’s Kilmurry-Ibrickane 1-14 to 0-8 during the quarter-final stage of the competition. Loughmore-Castleiney will be up against it in that fixture, but Declan Laffan’s men like nothing more than a challenge.

Meanwhile Fethard’s provincial adventure ground to shuddering halt on Sunday in Clonmel when the Tipperary intermediate champions lost to Kerry’s Kenmare 0-5 to 4-24.

Sarsfields won their AIB Munster Senior Hurling Championship quarter-final at Semple Stadium, Thurles on Sunday by a point (0-17 to 0-16) against Waterford’s Ballygunner when ace marksman Pa Bourke drilled over a late ’65 to seal a place in the final four for the Tipperary champions - to read a report on this encounter please click here.

On Sunday afternoon in Cusack Park, Ennis Ballyea beat Clonlara in a replayed Clare senior hurling final (2-14 to 1-14) to win a first-ever senior county title. Indeed, Ballyea are the tenth different team to win the Clare Senior Hurling Championship during the past 13 years. And, their prize is a home Munster senior hurling semi-final against Thurles Sarsfields in Cusack Park, Ennis on Sunday, November 6th (2pm). Besides inter-county star Tony Kelly Ballyea also feature powerful players in Gary Brennan, Jack Browne and Paul Flanagan.
Sarsfields, of course, will not look back on their most recent trip to Ennis fondly. In 2014 Thurles lost to Cratloe in a Munster semi-final at Cusack Park (0-14 to 1-18) when Denis Maher was shown a straight red card in controversial circumstances.

Tipperary champions Newport will be in AIB Munster Championship action on Saturday, November 5th when Dinny Ryan’s men take on Lismore at a Waterford venue (2pm).

On Saturday at New Inn Loughmore-Castleiney got their weekend off to a great start when beating Carrick Davins 0-16 to 1-8 in the Tipperary Water County Junior A Football Championship semi-finals. Loughmore-Castleiney will meet Clonoulty-Rossmore in the final following their 0-12 to 0-10 victory over Ballingarry on Saturday.

In a Tipperary Water County Junior B Football Championship semi-final played on Saturday in Golden Arravale Rovers got the better of Boherlahan-Dualla (1-13 to 1-4). Meanwhile in the Tipperary Water County Junior B Hurling Championship semi-finals Portroe beat Carrick Swans 1-15 to 0-10. The North champions will face Upperchurch-Drombane in the final following Upperchurch’s 1-18 to 3-7 win over Cashel King Cormacs. Both games took place on Saturday afternoon.

The Ulster Bank League returned to action on Saturday with mixed fortunes for the Tipperary clubs involved. Cashel RFC notched their first victory of the Ulster Bank League season when impressively beating Blackrock College 18-0 at Spafield and duly got off the bottom of the table. Meanwhile Nenagh Ormond suffered their first defeat of the season away to Malone (31-35). Nenagh have it all to do next weekend when they host league leaders Banbridge at New Ormond Park while Cashel RFC are away to bottom club Belfast Harlequins.