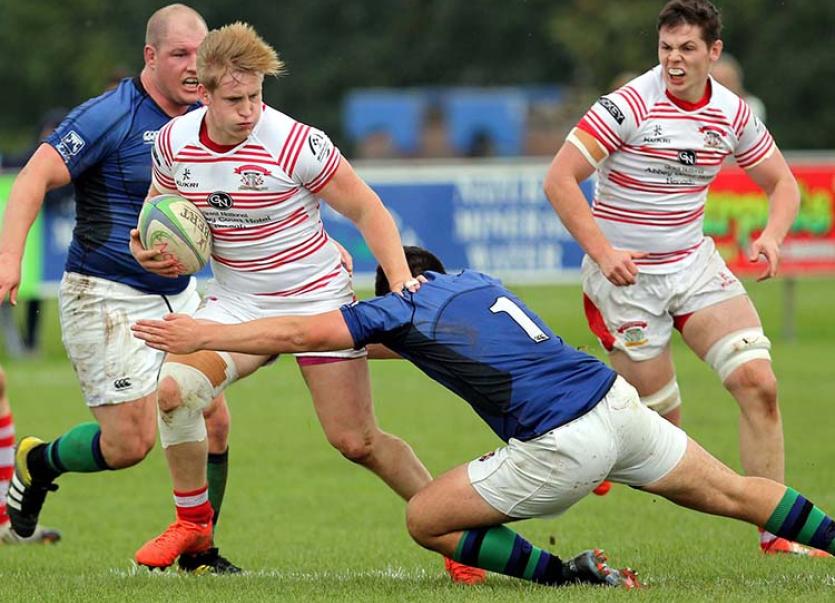 This was a top class bonus point-winning display from a Nenagh Ormond side who are now joint-top of the Division 2A in the Ulster Bank League. The Nenagh Ormond pack were outstanding during this contest with Cronan Gleeson and John Coffey catching the eye while Clayton Stewart bossed the game from out-half. However, outside centre Derek Corcoran trumped them all in the man of the match stakes.

Smarting from a dramatic 31-35 defeat suffered at the hands of Malone the previous week Nenagh Ormond dominated the opening half of this encounter and led 15-5 despite having played into a stiff breeze.

Right from the off it appeared as if a number of the Banbridge lads didn’t fancy the terms and conditions of his contest as out-lined by the home side. Indeed, Nenagh Ormond took the lead as early as the seventh minute - Derek Corcoran streaked through the Banbridge midfield before Peter O’Leary scooted up the right flank and found John Coffey for the opening try of the game.

Nine minutes later Nenagh Ormond doubled their advantage following an Eathon Moloney break. The Nenagh attack was checked deep inside the Banbridge 22, but Ormond recycled smartly to Peter O’Leary. The scrum half worked the ball out to Clayton Stewart who beat the visiting defence with a brilliant skip pass and John O’Flaherty scored in the corner.

This was really encouraging stuff from Nenagh Ormond, but Banbridge illustrated their pedigree with a breakaway try of real quality in the 19th minute.

In the 32nd minute a Banbridge penalty drifted wide of the Nenagh posts before William O’Connor was sin-binned for a dubious-looking high tackle in the 33rd. Banbridge now enjoyed a real opportunity to fight their way back into this contest, but it was the Nenagh Ormond lads who impressed during the closing stages of the half. Indeed, Nenagh notched their third try in the 42nd minute. Once more Derek Corcoran led the charge with a scintillating break before Peter O’Leary found Cronan Gleeson who finished with a one-handed touch down in the corner.

To be fair to the visitors Banbridge made a stand during the third quarter, but Nenagh Ormond appeared capable of comfortably defending the Ulster side’s persistent wide-wide attacking patterns. Nenagh Ormond also dominated Banbridge at scrum time all afternoon and in the 49th minute the home side earned a penalty from a scrum and Clayton Stewart booted over from five metres inside his own half (18-5).

The Tipperary side held Banbridge at arm’s length for the remainder of the half before Nenagh Ormond struck for the bonus point try in the 77th minute. And, the home side’s fourth try of the afternoon featured a redemptive moment. In the 24th minute William O’Connor had carved Banbridge open and found Kevin O’Flaherty on the overlap, but the second row knocked on with the try line at his mercy. O’Flaherty, however, made up for that error 53 minutes later. With three minutes to play Clayton Stewart and William O’Connor combined smartly in midfield and although the move was brought to a halt shy of the Banbridge line the ball was recycled and Kevin O’Flaherty plunged over for a fourth try which Clayton Stewart converted. A key feature to this try was Cronan Gleeson - the prop showed real skill when gathering a looping pass one-handed before setting up O’Flaherty for the touchdown.

There was more encouraging news for Tipperary rugby when the news filtered through that Cashel RFC had beaten Belfast Harlequins away from home (22-14). Next weekend Nenagh Ormond are at home to Galway Corinthians while Cashel RFC are away to Banbridge. Both games take place on Saturday, November 12th at 2.30pm.