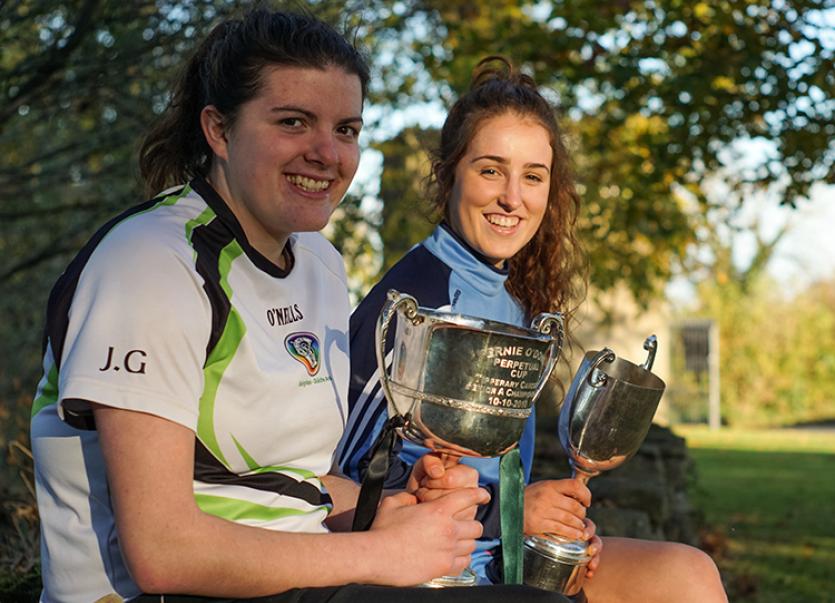 Nenagh Éire Óg and Burgess-Duharra, the Tipperary intermediate and senior Camogie champions, are appealing for your support ahead of next weekend’s provincial club finals in Cahir.

Cahir GAA Club will host an enticing double header on Saturday, November 12th - at 12.30pm Nenagh Éire Óg will face Gailltír Camogie Club (Waterford) in the Munster intermediate Camogie club final while at 2.45pm Burgess-Duharra take on Inniscarra of Cork in the senior decider. Both of the respective Tipperary champions enter their provincial finals as underdogs and will need all the help they can get against opposition of real pedigree.

Burgess-Duharra recently registered a fifth successive county senior title and sixth in seven years thanks to a replayed final win over Borris-Ileigh (2-13 to 1-9). And, although the Tipperary girls then progressed to beat Limerick champions Granagh-Ballingarry they really will have it all to do against the Rebels.

In the Cork county final Inniscarra beat Milford who would be regarded as one of the greatest club Camogie teams ever - Milford won three of the last four All-Ireland club titles and were also seeking a fifth successive county title when they faced Inniscarra at the Cork Institute of Technology on Friday, October 28th. Inniscarra, thanks to a superb display, beat the defending All-Ireland club champions 4-10 to 2-13. Three days later Inniscarra were asked to play a provincial semi-final and, to their credit, the Cork champions made the long journey to Clare and beat Inagh-Kilnamona 1-10 to 0-7.

Inniscarra, who are renowned for their travelling support, won their first Cork county title in 2010 before adding a provincial title and an appearance in the All-Ireland club final during a ground-breaking season for the club. Joanne Casey (captain) and Rena Buckley will be familiar names to Camogie fans.

Darrell Tucker (Burgess), who is joined on the Burgess-Duharra management team by Timmy Maher (Burgess) and James McGrath (Toomevara), knows that the challenge posed by Inniscarra is one of the very greatest ever faced by his team.

“Milford are after winning the last four Munster senior titles. So, to take a scalp like that you would have to be respected. And, we will certainly be respecting Inniscarra on Saturday. We just have to look after our own performance. If we can perform to our own ability hopefully it will be enough to get us over the line,” Darrell added.

“This is where you want to be. You want to get to a county final and then, if you can, progress to a Munster final. This is a massive challenge for us, but we are actually really looking forward to it. Hopefully things will go well.”

Burgess-Duharra lost last year’s provincial final to Milford, but got this year’s Munster campaign off to an encouraging start when beating Granagh-Ballingarry (5-17 to 1-9) on Saturday, October 29th in Ballingarry, Limerick.

“Following the match I was pleased enough,” Darrell Tucker explained as his thoughts turned to the impressive 20-point win over a side who had brought Burgess-Duharra’s 2014 campaign to a crushing end.

“I was pleased with the score that we put up, but there are a lot of things that we can improve on,” Tucker added before praising his players for their focus, intensity in training and dedicated to the cause this season.

“They seem to be very focused this year - there have been no distractions; they are focused on the job in hand and there is no looking past the next game,” Darrell Tucker explained.

“We are just taking it one game at a time. I am just delighted by the way they are applying themselves in training and by their focus coming up to match time,” Tucker said. 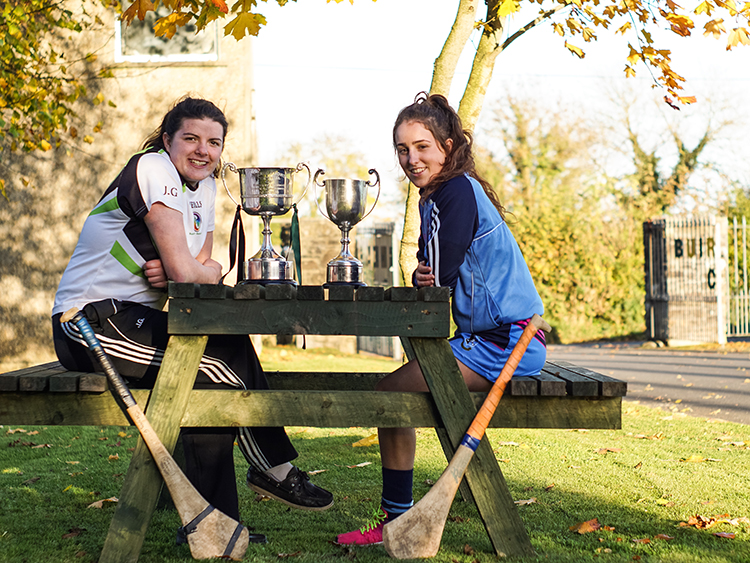 Éire Óg set a terrific example to clubs across the county. Following years of neglect of the game in the town an ambitious Camogie club was formed in recent years and steady progress was soon made - the Blues won the junior B county title in 2013, the junior A title in 2015 and have now graduated to the senior ranks.

It has taken a lot of hard work and a lot of raw determination for the Blues to make such progress. This year, especially, Nenagh were asked to dig particularly deep.

Éire Óg lost the league final to Drom & Inch and then shipped a heavy defeat to Silvermines in the opening round of the championship, but Nenagh regrouped impressively to beat Shannon Rovers and Kilruane MacDonagh’s before earning an impressive one-point win over the ‘Mines in a recent county semi-final. Éire Óg then faced into the county intermediate final against Drom & Inch and won (2-14 to 2-6).

Éire Óg, however, will be asked to step up to another level entirely when they face Gailltír Camogie Club, the Waterford senior Camogie champions, on Saturday in Cahir.

“We are hugely proud of them,” manager Paul Henry told the Tipperary Star - Paul is joined on the Éire Óg management team by trainer Bertie Sherlock (Toomevara).

“In the last ten weeks they have really knuckled down and really bought into what we have been telling them. We got hammered by the ‘Mines by 22 points in the first round of the championship when we were missing a few girls, but I said to them that night in the dressing room that they if they just stayed focused on what we were asking them to do we could get to a county final,” Paul Henry explained.

A key match arrived when Nenagh Éire Óg faced Shannon Rovers and found themselves trailing by a significant amount at the interval. The team re-grouped, however, at the break and, finally, got going.

“I think that all the belief seemed to come back into them all of a sudden to be honest,” Paul Henry said.

“We played Kilruane (MacDonagh’s) in the quarter-finals and we beat Kilruane fairly comprehensively. Then, I suppose, when we went into the semi-final against the Silvermines and they were the overwhelming favourites. We really didn’t have anything to lose, but we felt that the girls were in a really good place at the time. They got the one-point victory against the ‘Mines and it really galvanised them as a group. I think they really believed then that they could achieve,” Henry added.

Paul Henry, a proud Nenagh Éire Óg man, has been working on and off with this group of players for several years and you sense how proud he is of his players. Who wouldn’t be? The defining characteristic of this team is raw grit.

“I can honestly say that in all my time involved with Nenagh that I have never come off the field disappointed in them,” Paul Henry said proudly.

“Even against the ‘Mines this year, when they beat us by 22 points, I wasn’t disappointed in them because they gave it everything they had. They have always emptied the tank for me, completely. Even the last day they were just unreal. We have 24 on the panel there now and they are as committed as anyone and especially in the last few months they really stood up,” Paul Henry said.

Nenagh Éire Óg will need every ounce of that determination when they face Gailltír Camogie Club on Saturday; Gailltír are a team of real pedigree. Gailltír beat Lismore in the Waterford senior Camogie final (2-9 to 1-6) before seeing off Blackrock, the Cork intermediate champions, in a provincial semi-final (2-10 to 1-7). The Gailltír team will, of course, also feature Waterford inter-county star Patricia Jackman who was nominated for a Liberty Insurance All Star award. 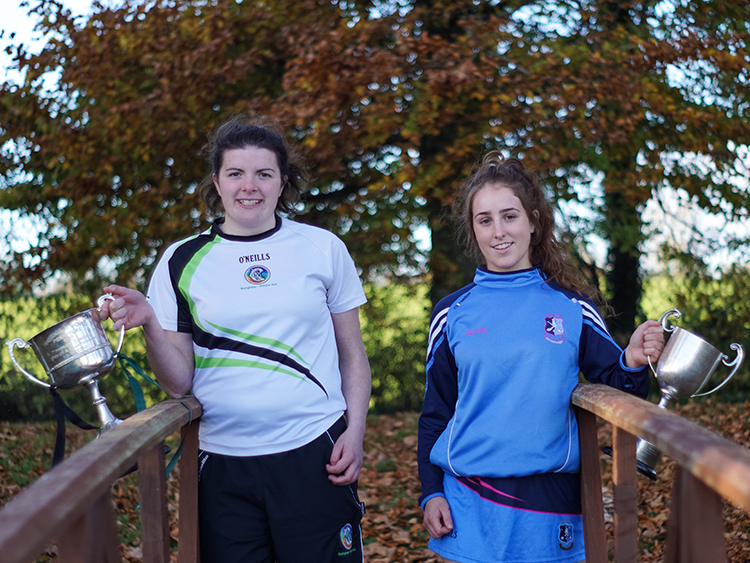