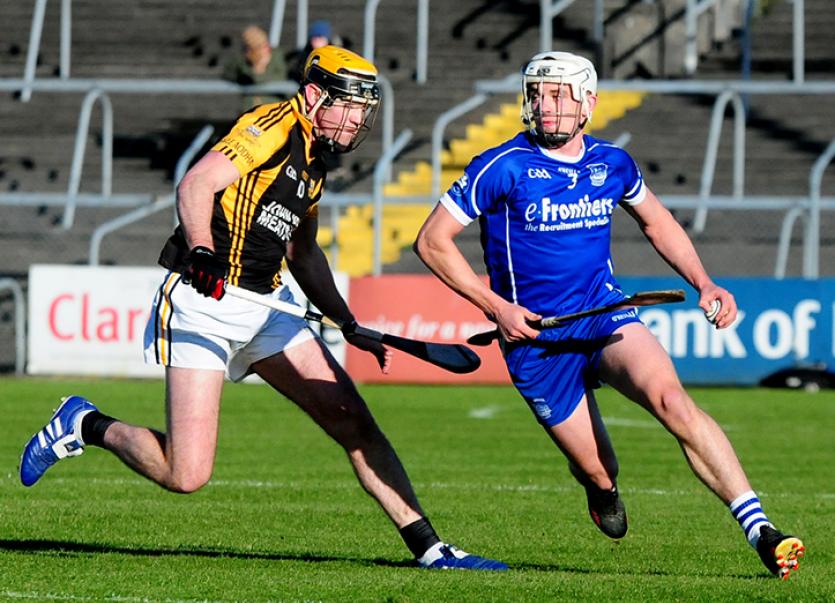 There was absolutely no shame in defeat for a Thurles Sarsfields team who lost out narrowly to Clare champions Ballyea at a rocking Cusack Park, Ennis on Sunday in a thrilling AIB Munster Senior Hurling Championship semi-final.

Extra-time was required separate these two in a game which provided the most magnificent of sensory overloads. This contest had everything and the drama was excruciating.

Thurles Sarsfields looked the more accomplished outfit for long stages of this semi-final. Indeed, Paddy McCormack’s men appeared to have passed a huge mental test in this encounter.

Despite shipping two early goals and falling four points behind Sars re-grouped and expertly countered Ballyea’s strengths before unfurling their own attacking game to devastating effect. With ten minutes to play the Tipperary champions led by seven (1-16 to 2-6) and looked assured of victory. Just then, however, Tony Kelly burst into life like some sort of comic book hero. The 2013 hurler of the year reeled Thurles in during the frantic closing minutes before a Gary Brennan strike forced extra-time in the most dramatic of circumstances (1-18 to 3-12).

Thurles Sarsfields now found themselves in a complicated situation (some would say a carelessly self-inflicted wound) against a side inspired by the sniff of a famous provincial victory and roared on by an enthusiastic home crowd.

In the opening half of extra-time Ballyea surged four clear, but Thurles Sarsfields fought back. A Pádraic Maher goal tied it up, but the Clare champions saw this contest out impressively and will now take on Cork’s Glen Rovers in the Munster final.

Irrespective of this disappointment Thurles people should be proud of the manner in which this team has represented them. They have been magnificent Tipperary champions for the past three seasons and contributed handsomely to this outstanding game. Indeed, Pádraic Maher, John Maher, Billy McCarthy, Aidan McCormack and Pa Bourke were in outstanding form on Sunday. That said a beautiful defeat is still a defeat and the circumstances associated with this one will take some time to get over.

Thurles Sarsfields started without the injured Richie Ruth and Michael Cahill, but impressed in the opening minute when Conor Lanigan played a one-two with Pa Bourke and Bourke presented his side with the lead.

Thurles, however, were dealt an early blow when Stephen Lillis fouled the towering Gary Brennan for a penalty which Tony Kelly fired into the bottom right-hand corner in the fourth minute. Two minutes later Billy McCarthy broke Paddy McCormack’s puck-out through to Tommy Doyle and the wing-forward doubled his side’s tally.

Straight from the resultant puck-out, however, wing-back James Murphy gathered a short re-start and bombed the ball down toward Gary Brennan at full-forward. Brennan caused consternation, the ball broke and Pearse Lillis flashed a shot home (0-2 to 2-0).

Despite the deficit Thurles supporters could console themselves with the fact that their side was actually playing quite well. In the third minute Conor Lanigan’s first-time pull flew wide and seven later Pádraic Maher played a beauty of a ball into the hand of Lar Corbett who off-loaded to Billy McCarthy - McCarthy found Conor Lanigan in open country, but the corner-forward batted wide. Three minutes later Thurles created another goal-scoring opportunity, but Lar Corbett booted wide with the goal at his mercy. Thankfully, Thurles finally notched the goal their approach play richly deserved in the 13th minute when Lar Corbett made a nuisance of himself, distracted Ballyea ‘keeper Kevin Sheehan and Aidan McCormack’s shot at a point snuck in under the crossbar (1-3 to 2-2).

Following that three-pointer Thurles Sarsfields (who were playing into the breeze) added six points without reply during a period of complete and utter dominance - two Pa Bourke frees and another from play featured, as did a brace from Aidan McCormack while Ronan Maher cracked over a superb left-handed effort. By the 27th minute Thurles led 1-9 to 2-2. And, it is worth noting the effect that the re-positioning of Ronan Maher to full-back on Gary Brennan was having on this contest.

In an effort to break up the prevailing pattern of the game Ballyea moved Gary Brennan to wing-forward, played two on the inside line and added Cathal Doohan to their half-back line. Ballyea closed out the half with a Niall Deasy free and their first point from play which came courtesy of Pat Joe Connolly in the 31st minute. Thurles though still looked the more impressive side and closed out the half with excellent points from John Maher and Tommy Doyle (1-11 to 2-4).

The sides traded a brace of efforts from placed balls during the opening eight minutes of the second half before Sarsfields surged six clear thanks to a wristy stroke from Conor Lanigan and a cracking point from Pa Bourke in the 41st minute following an impressive Pádraic Maher burst forward (1-15 to 2-6).

By now it was hard to see Ballyea wriggling out of this one. Indeed, the Clare men could have found themselves more significantly adrift entering the final quarter, but had goalkeeper Kevin Sheehan to thank for a brave block - the Ballyea ‘keeper was smartly off his line to deny Conor Lanigan after Billy McCarthy’s eye-catching advance.

Ballyea had still only managed a single point from play when Pa Bourke presented Thurles with a 1-16 to 2-6 advantage (that’s seven points) in the 50th minute.

Prior to this juncture John Maher had done a terrific man-marking job on inter-county star Tony Kelly, but Maher appeared to ship a knock late in the game and Kelly duly burst into devastating life. Kelly smacked over one off his right and one off his left either side of a Michael O’Brien effort before Kelly provided the assist for a Damien Burke point. Kelly then converted an awkward free in the 56th minute and, suddenly, Ballyea had closed the gap to a manageable four (1-17 to 2-10).

A Pa Bourke free settled Thurles once more in the 58th minute before Sarsfields corner-back Rory Dwan denied Pearse Lillis a clear sight of goal with a brilliant tackle.

As the time ticked down Thurles appeared reasonably secure, but Ballyea hit 1-2 in a frantic finish. A Pearse Lillis effort set his side on the way before Tony Kelly conjured an extraordinary shot off his left-hand side right on the hour mark to leave three between them. Then, fully four minutes into injury time, Ballyea mounted one final attack; an attack which featured a bustling run and sensational left-handed rasper from Gary Brennan.

There we were wondering what everybody else must have been wondering: what just happened? Thurles Sarsfields now found themselves in a needlessly-complicated situation and re-located Denis Maher to half-forward in order to address the issue of their malfunctioning forward unit.

Although Thurles were now playing with the wind Ballyea seized the initiative and surged four clear during the opening half of extra-time (1-20 to 4-15). Aidan McCormack added two terrific points to the Sarsfields tally during their period, but the Ballyea half-backs were well on top of their men. Indeed, based on this platform Tony Kelly was coming more and more into the game and hit three terrific points while Gary Brennan, a persistent thorn in the side of Thurles, set up Damien Burke who shortened neatly and buried his side’s fourth goal.

For the second half of extra-time Sarsfields opted to position Pádraic Maher at wing-forward. The alteration yielded an early dividend when Maher was fouled for a free which was converted by Pa Bourke. Then, with just five minutes to play, Lar Corbett won a turnover ball off Ballyea full-back Jack Browne and with the home crowd howling for a free Pádraic Maher seized on the opportunity and drilled home a terrific goal - draw game (2-21 to 4-15).

This glorious out-pouring of sporting folly deserved to be won in a grand manner and to be fair to Ballyea the Clare champions charged toward the final whistle impressively with three points from Niall Deasy (one free, one ’65). Thurles Sarsfields, of course, never gave up. Stephen Cahill managed a point in response, but a Ronan Maher sideline found a Ballyea post and another Maher effort from play drifted agonisingly wide when just the minimum separated the sides.