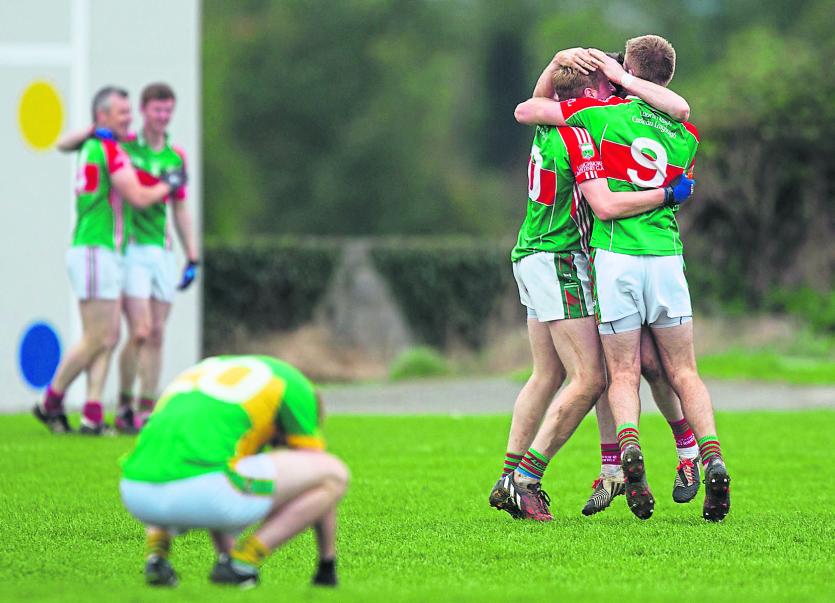 Loughmore-Castleiney will relish the challenge of taking on Dr Crokes in Killarney.

And, Loughmore will face into the lion’s den that is Killarney with their heads held high. For Declan Laffan’s men there is simply no other way to go about your business.

“They are a super outfit and any team that has Colm Cooper are going to be good. It is going to be a huge challenge, but we are up for it and we are going to go down and give it a lash as they say,” Declan Laffan said this week.

Loughmore, however, do have something to offer this provincial semi-final and if they can reproduce their very best form then who knows.

“We need to replicate what we did against Clonmel Commercials. The work rate and the effort was as good as anything I have ever seen in a team to come out of this club.

“We want to replicate the performances that we produced against Clonmel Commercials and Moyle Rovers. That’s what we are looking for,” Declan Laffan added - manager Laffan is joined on the Loughmore-Castleiney management team by selector Pat McGrath and S&C coach Alan O’Connor.

Loughmore's memories of their 2013 trip to Killarney are not warm ones. Three years ago the Tipperary champions lost to Dr Crokes ignominiously (1-5 to 3-16). At the time Dr Crokes were en route to a third consecutive provincial crown (2011-2013) and an ill-tempered contest saw two Loughmore men sent off.

“Three years ago we went down there and ten minutes into the second half there were two points in it. Having come back from five down we missed a handy free to bring it back to a point and then straight from the kick-out we had a man sent off. Then the heads dropped and they went to town on us,” Declan Laffan told the Tipperary Star.

“Being honest we have prepared well, but it is very difficult to go down to their home patch and to try to win the game,” Laffan added.

Loughmore preparations have been complicated by the fact that Cian Hennessy is out of the country while Dr Crokes enter this contest having already made the trip to Páirc Naoimh Mhuire in Quilty - the Kerry champions won a quarter-final clash with Kilmurry-Ibrickane (1-14 to 0-8) and must be confident of landing a seventh provincial crown.

Players like Colm Cooper, Eoin Brosnan, Dáithí Casey, Fionn Fitzgerald and Johnny Buckley are sure to shine for a Dr Crokes team who have an eye on celebrating the 25th anniversary of their 1992 All-Ireland club success on St Patrick’s Day 2017.

Loughmore, however, are no slouches and hopefully, after winning three county titles in four years, Declan Laffan’s men might just be ready to step up a level.

On Sunday, November 13th Portroe will face Upperchurch-Drombane in a Tipperary Water County Junior B Hurling Championship final at 2pm in Kilcommon - a tasty clash is on the cards here and is sure to attract a crowd.

Meanwhile on Friday, November 11th Loughmore-Castleiney will take on Clonoulty-Rossmore in an eagerly-anticipated Tipperary Water County Junior A Football Championship final at 8pm in Templetuohy.

In the semi-finals Coláiste Cholmáin Fermoy beat John The Baptist Community School, Limerick 3-12 to 1-12 while in their corresponding clash Thurles CBS saw off Midleton CBS 4-24 to 0-8.

Nenagh Éire Óg and Burgess-Duharra, the Tipperary intermediate and senior Camogie champions, are appealing for your support ahead of next weekend’s provincial club finals in Cahir.

Cahir GAA Club will host an enticing double header on Saturday, November 12th - at 12.30pm Nenagh Éire Óg will face Gailltír Camogie Club (Waterford) in the Munster intermediate Camogie club final while at 2.45pm Burgess-Duharra take on Inniscarra of Cork in the senior decider. Both of the respective Tipperary champions enter their provincial finals as underdogs and will need all the help they can get against opposition of real pedigree.

Following encouraging wins for both Nenagh Ormond and Cashel RFC in Division 2A of the Ulster Bank League last weekend both sides are in action, once more, on Saturday, November 12th. Cashel RFC are away to league leaders Banbridge (Rifle Park) while Nenagh Ormond are home to Galway Corinthians RFC in New Ormond Park (both games at 2.30pm).