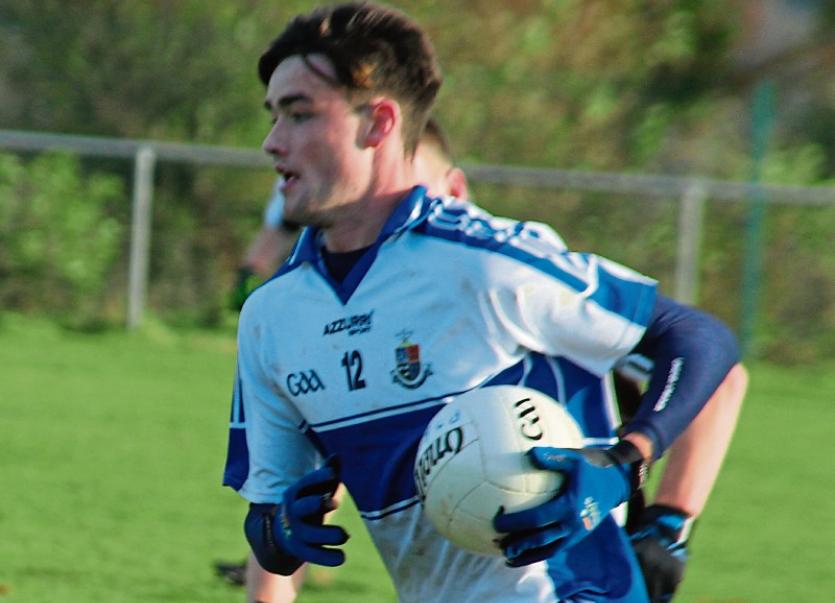 Conor Lonergan in action for Rockwell College in their win over Kenmare,

Rockwell College won through to Munster Senior ‘B’ colleges semi-final with a 3-12 to 2-10 win over Pobalscoil Kenmare in the quarter final at Mallow.

From the throw in, Rockwell settled quickly and were ahead by 3 points after 14 minutes. The scores came from Conor Lonergan, and two from Mark Kehoe.

Kenmare now came more into the match winning good possession around midfield but, despite their possession, managed only two points from Tadhg Sugrue and Colin Crowley. Rockwell then hit a purple patch scoring 2-4 without reply.

The goals were superbly finished by Mark Kehoe and Conor O’Brien who fisted to the net after great approach work by Jake Flannery and Ryan Lambe. Kenmare replied with a goal from Michael Mc.Carthy and two points from Donal O’Sullivan. The concluding point of the first half came from a lovely passing movement which was finished by Ryan O ‘Sullivan.

Rockwell won the throw in from the restart but lost possession, and this enabled Kenmare to attack and reduce the deficit, with points from Dylan O’Connor and Michael Mc.Carthy. Rockwell’s first point of the second half came from Ryan Lambe.

Kenmare then enjoyed their best period of the game, dominating mid-field for the next ten minutes. In this period they scored 1-4 without reply with the goal coming from their most influential forward, Michael Mc. Carthy.

With 8 minutes remaining, Kenmare were leading by 2-10 to 2-9 but they failed to score for the remainder of the game. Rockwell again took control and scored 1-3 without reply, the goal coming from Conor Lonergan and points from Jake Flannery, Ryan Lambe and Ryan O’Sullivan.