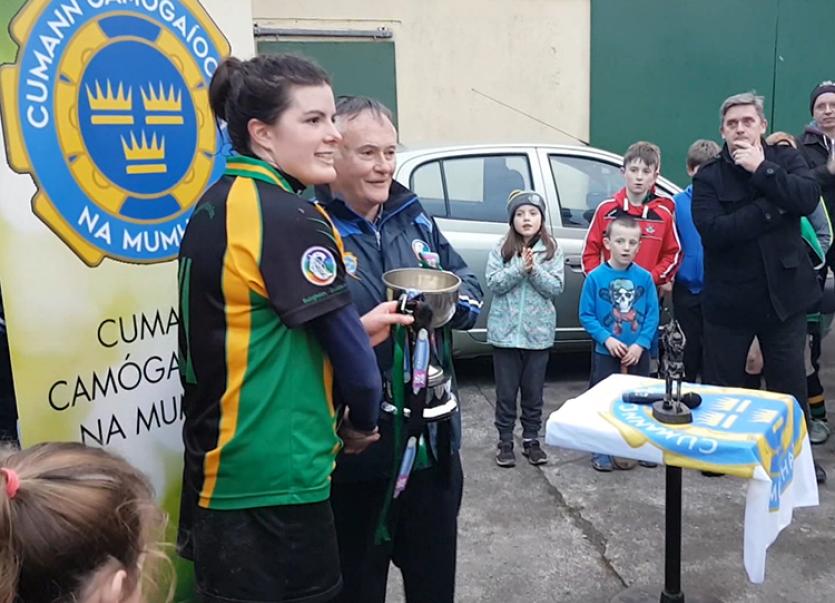 This was an accomplished display, which featured a searing defensive effort, from Burgess-Duharra as the Tipperary champions claimed a first provincial title. Although Caoimhe Maher and Tishy O’Halloran exerted a huge influence on this final it was probably fitting that Burgess-Duharra captain Jenny Grace was named the player of the match.

The willingness of the Burgess-Duharra half-forward line to work back and make life as difficult as possible for the opposition was a huge factor in this contest. Centre-forward Jenny Grace worked tirelessly as did Ciara McKeogh and Ruth Barry either side of her. Indeed, it was no accident that Inniscarra, the Cork champions, were held scoreless from play. Grace, McKeogh and Barry are the lungs of this side while Ciardha Maher, Caoimhe Maher and Tishy O’Halloran patrol the central corridor. On Saturday this bunch set the terms and conditions of the battle - Burgess-Duharra played the game on their terms while up front Amy Kennedy, Tara Kennedy and Eimear McDonnell sunk the knife in when the opportunity presented itself.

Jenny Grace (free) opened the scoring before Tara Kennedy set up Amy Kennedy for a smashing point in the third minute. Inniscarra, however, hit back with a brace of frees from Joanne Casey. Both sides were thundering into the challenges and Burgess-Duharra were left cursing their misfortune in the 10th minute when Amy Kennedy sent Tara Kennedy through, but referee Philip Dee called play back for a foul on Amy Kennedy even though Tara had the goal at her mercy.

The sides traded points from placed balls thereafter before two Jenny Grace frees presented Burgess-Duharra with a 0-5 to 0-3 lead in the 18th minute. The Tipperary champions were defending their half of the field expertly while their inside line were primed to go off like a hand grenade at any given moment. Amy Kennedy had made a very bright start to the game and in the 19th minute Kennedy broke a Caoimhe Maher delivery into the path of Eimear McDonnell who gathered smartly before racing through and finishing off her left (1-5 to 0-3).

Jenny Grace added another free before Burgess-Duharra notched a signature score in the 33rd minute - Tara Kennedy did especially well to close down and dispossess an Inniscarra defender before working the ball into the hand of Amy Kennedy. Kennedy, in turn, found Ciara McKeogh making an off-the-shoulder supporting run and McKeogh belted her side into a 1-7 to 0-3 interval lead. This was accomplished hurling and anyone would be proud to find themselves associated with such a hard-working side. Indeed, the Burgess-Duharra team were cheered to their dressing room by a bumper crowd in Cahir.

Inniscarra re-positioned Rena Buckley to centre-back after the break and did their utmost to fight their way back into this contest. A ferocious battled ensued with the sides trading three frees apiece during the opening 18 minutes of the second half before Joanne Casey (free) brought the scoring to a conclusion from an Inniscarra point of view in the 52nd minute (1-9 to 0-6). Despite their best efforts Inniscarra had only managed to reduce Burgess-Duharra’s interval lead by a single point.

Inniscarra desperately required a goal and threatened to notch one thanks to an Aileen Sheehan burst in the 54th minute, but a combination of Maeve Maloney, Tishy O’Halloran, Ciardha Maher and Caoimhe Maher swallowed up Sheehan, tackled with discipline and forced the over carry.

A Jenny Grace free opened a seven-point gap between the sides soon after before Burgess-Duharra struck for a second goal in the 58th minute. Once more an Inniscarra forward was dispossessed deep inside the Tipperary champions’ half, the ball was worked into the hand of Gemma Grace and the full-back strode forward before picking out Eimear McDonnell with a sensational 50-yard delivery. McDonnell turned, took on the Inniscarra defence and then played in Tara Kennedy who hand-passed home. Game over.