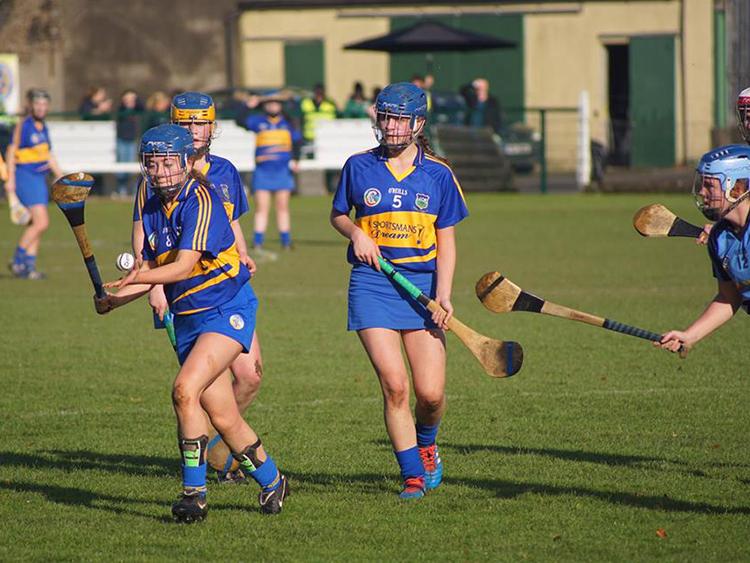 Nenagh Éire Óg were left absolutely heart-broken at Cahir on Saturday afternoon when the Blues lost an absolute thriller by a single point to an exceptional Gailltír Camogie Club team.

Éire Óg had it all to do against the Waterford senior champions. Finding themselves pitted against a team who were physically stronger and who featured All Star nominee Patricia Jackman Nenagh were asked to dig deep in this contest. And, to be fair to them they did.

Playing with the wind in the opening half Éire Óg etched out a three-point interval lead (2-4 to 0-7), but despite a heroic effort Nenagh struggled to contain the outstanding Gailltír attacking duo of Patricia Jackman and Áine Lyng in the second half.

Éire Óg, however, left Cahir on Saturday with their heads held high. The Blues were a credit to their club, their town and their families. Grace O’Brien, Rachel Maher, Alanna Morris, Rachel O’Connor, Eimear Ryan, Maeve Coffey and Caroline Browne tried desperately hard for an Éire Óg team who must have been irritated by the fact that referee Cathal Egan opted to play just a single minute of injury time despite a number of stoppages in the second half.

Ciara McGrath set up Grace O’Brien for the opening score of the game before Patricia Jackman (free) equalised for Gailltír. Sarah Quigley saved brilliantly to deny Gailltír’s Eilís Cullinane as early as the sixth minute while a Ruth Hassett block denied the Waterford senior champions another three minutes later before Roisín Flood presented her side with a precious 0-2 0-1 advantage.

In response Éire Óg struck for their first goal in the 13th minute - Eimear Ryan picked out Grace O’Brien and although the full-forward’s shot found the crossbar O’Brien collected the rebound and made no mistake at the second attempt. Patricia Jackman and Grace O’Brien traded points thereafter before points from Áine Lyng and Jackman tied the game (1-2 to 0-5) by the 18th minute.

A Grace O’Brien free edged Éire Óg back into the lead, but Annie Glavey responded soon after while the impressive Áine Lyng presented Gailltír with a 0-7 to 1-3 lead in the 29th minute. Michelle Collins cracked over a smashing point in response before Éire Óg closed out the half impressively. Caroline Browne won a terrific turnover ball, played a one-two with Grace O’Brien and then buried Nenagh’s second goal.

Éire Óg led 2-4 to 0-7 at the break having played with the breeze. It is worth noting, however, that Gailltír dropped 11 shots short in the opening half (Éire Óg one) and also spurned three solid goal-scoring opportunities.

Éire Óg’s work was neatly carved out them in the second half and the Blues tried desperately hard to hold off Gailltír.

An Áine Lyng point got the Waterford champions moving in the right direction before Patricia Jackman buried a penalty in the 34th minute. Points from Áine Lyng (free) and Patricia Jackman (two) helped Gailltír into a 1-11 to 2-4 lead - Éire Óg had now gone from three up to four down in 15 minutes. Patricia Jackman added another point soon after and Éire Óg were in danger of finding themselves cut adrift.

Maeve Coffey, however, had other ideas - the second half substitute sparked the Éire Óg forward line to life in the 47th minute when she set up Grace O’Brien for a brilliant goal - soon after Sarah Quigley made a terrific save to deny Eilís Cullinane a goal before a Patricia Jackman free helped Gailltír toward a three-point lead (3-4 to 1-13).

With six minutes to play Grace O’Brien ensured a grandstand finalé when the full-forward gathered the break from Ciara McGrath’s searching long-range free and buried a right-hand shot - draw game (4-4 to 1-13).

Kate Lynch created a goal-scoring opportunity for Gailltír three minutes later, but Ciara McGrath got back to turn over the ball. There was no denying Patricia Jackman a point in the 58th minute, but Éire Óg responded brilliantly when Maeve Coffey set up Grace O’Brien for a cracking equaliser on the run off her right.

Then, right on the hour mark, Gailltír conjured one final attack and Patricia Jackman, a most obvious candidate for the player of the match award, belted over the winner.