Is this a record? Tipperary side St. Michael's win 18-0 in FAI Junior Cup 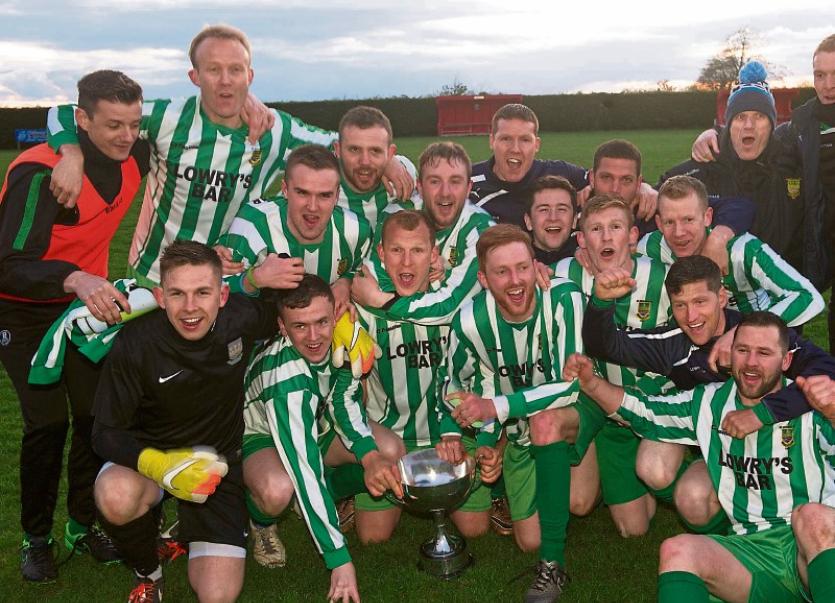 St. Michael's celebrate their league win last season. On Saturday they reached new heights with an 18-0 win in the FAI Junior Cup

As one of the top junior clubs in the country, St. Michael's from Tipperary town have enjoyed some big wins in their time.

That was the number put past hapless Kilsheelan United in the fourth round of FAI Junior Cup on Saturday night.

It must be one of the highest scores recorded in the Tipperary Southern and District League, certainly in junior soccer.

A correspondent recalls the Saints putting eighteen past a severely depleted Cashel Town in a youths game twenty years ago but it must be one of the highest scores ever in the FAI Junior Cup.

The twice winners of the Blue Riband of Irish junior soccer have hit some big scores in recent weeks but nothing to match this landslide played under lights at Cooke Park.

They led 10-0 at the break and didn't ease up in the second half.

Ryan Deere got the first after only eight minutes, and when Richie Ryan and Deere got two more in the next two minutes, it looked like it was going to be a long night for the visitors. But no one could have imagined the nightmare it would be for Kilsheelan.

Colin Bargary, Deere with two more, a brace by Joey Mulcahy and Paddy Fitzgerald, along with a cracking finish by Ger Browne made it ten at the break.

The Tipperary Town side were just as relentless in the second period with Mulcahy getting two to complete his hat trick and a goal from Paul Breen before the hour was now turning the game into a complete rout.

Browne got two more to complete his hat-trick and Fitzgerald two to make four for his night’s work before Russell Quirke finished off the scoring against a gallant but ultimately very limited Kilsheelan side.