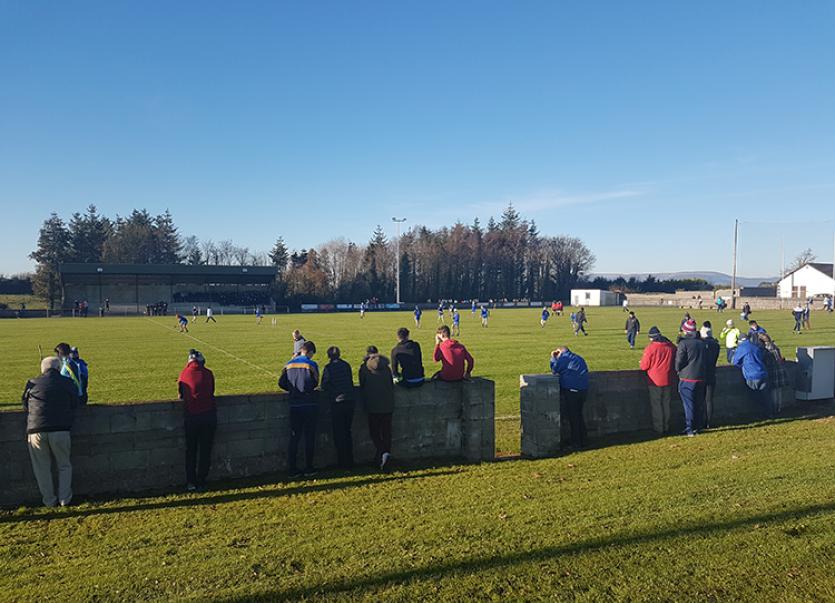 Nenagh CBS progressed to the last eight of the Dr Harty Cup, but only after a tense contest with Castletroy College which got needlessly complicated. Entering the final quarter of this last sixteen clash Nenagh CBS trailed Castletroy College by a point (0-14 to 1-12) despite looking the more accomplished outfit in Newport. However, Nenagh CBS saw out the game well and won the remainder of this contest with seven to spare.

The Nenagh CBS management team will be concerned to see their side concede 22 frees while getting the side settled before the quarter-finals on January 11th must surely be a priority.

Nenagh CBS started well with points from Jake Morris and Mark Daniels (free) forcing them two clear before Mark O’Dwyer, an unerring free taker who fired over 12 placed balls in all on Wednesday afternoon, hit back for Castletroy. The sides traded placed balls thereafter before points from Jake Morris (two placed balls) and Jerome Cahill helped the Tipperary lads into a 0-6 to 0-2 lead by the 13th minute. Indeed, Nenagh CBS could have enjoyed a much more significant advantage, but Castletroy ‘keeper Pádraig Harnett saved well from Craig Morgan in the 11th minute.

O’Dwyer responded with a free for Castletroy, but Nenagh CBS were more than comfortable and added points which came courtesy of Stephen Kirwan, Jake Morris (free) and Billy Seymour to lead by six (0-9 to 0-3) as early as the 18th minute. Two O’Dwyer frees reduced the Nenagh CBS lead a little, but Craig Morgan soon fired over a point in response. Morgan missed a trick, however, as Eoin Power had made a clever supporting run and a goal chance was duly spurned.

Conor Nicholas plundered Castletroy College’s one and only point from play in the 25th minute to leave four between the sides and although a Bryan McLoughney free helped Nenagh CBS toward a 0-11 to 0-6 lead the Limerick lads closed out the half in encouraging fashion. Another O’Dwyer free reduced the deficit by one before Brian Garry set up Darren Coughlan for a smashing left-hand finish on the stroke of half-time and the sides retired with the minimum between them (0-11 to 1-7).

Nenagh re-structured their side at the break and a series of switches yielded a neat dividend when CBS surged four clear thanks to efforts from Bryan McLoughney (two, one free) and Jake Morris (free) to lead 0-14 to 1-7 by the 33rd minute. Just then, however, Nenagh CBS lost their way and Castletroy fired over five consecutive frees to force and enjoyed a 1-12 to 0-14 advantage entering the final quarter.

Bryan McLoughney steadied Nenagh CBS with a converted free before Ruairí Maher set up Conor McCarthy for a smashing point in the 48th minute. Billy Seymour and Stephen Kirwan worked hard to create a goal-scoring opportunity for Robbie Quirke with ten minutes to play, but Pádraig Harnett saved smartly, once more.

Jake Morris converted the resultant ’65 before Ruairí Maher landed two beauties (one off either hand) to present Nenagh CBS with a 0-19 to 1-12 lead. O’Dwyer hit back with a free for Castletroy, but Nenagh CBS’ Conor McCarthy broke the back of the Limerick challenge in the 54th when he raced through, shortened cleverly and finished well off his right.

A Jake Morris free brought the scoring to a conclusion from a Nenagh CBS point of view while Castletroy busied themselves with a late assault on Barry Hogan’s goal which was, to be fair, ably managed by the Kiladangan man.

Our Lady’s Templederry signalled their intent at Ballyagran, Limerick on Wednesday when beating Árdscoil Uí Urmaltaigh, Bandon by a whopping 42 points (6-27 to 0-3). Our Lady’s led that contest 2-13 to 0-1 at the break.

Thurles CBS will be in knock-out action on Thursday, December 1st against Abbey CBS in Dundrum (2pm). Thurles CBS are seeking their ninth provincial under-18.5A colleges title this term, a title the famed secondary school last won in 2015. Our Lady’s Templemore featured in the 2016 final, but lost out to Limerick’s Árdscoil Rís - Our Lady’s won the coveted Munster colleges title once previously (1978). Nenagh CBS have never won the Dr Harty Cup while Abbey CBS, Tipperary won the title on one previous occasion (1959).

The quarter-final draw is scheduled to take place on Thursday, December 15th - it will be an open draw with repeat pairings avoided where possible. The quarter-finals are scheduled for January 11th, semi-finals for January 28th and the Dr Harty Cup final is pencilled in for Saturday, February 18th.