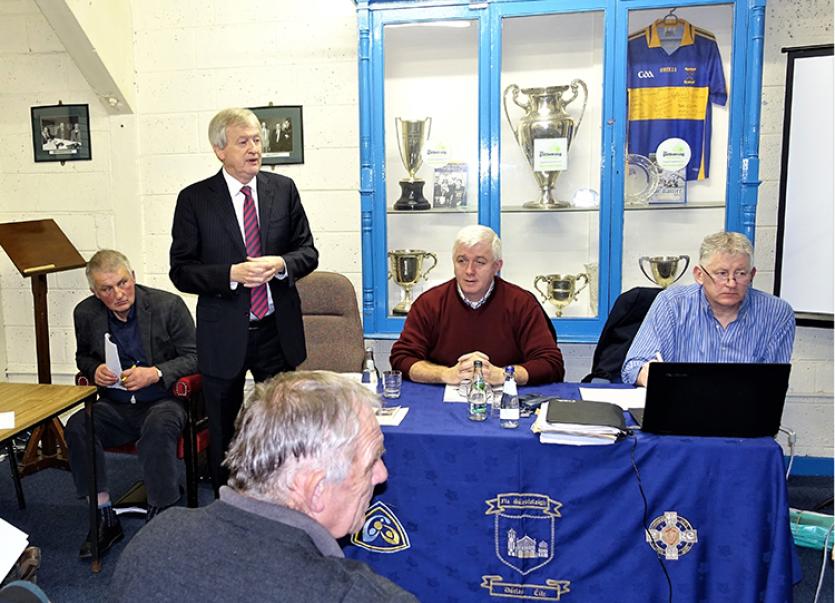 GAA director general Páraic Duffy has called on Tipperary to have more confidence in itself as a county and embrace a proposal to revamp the All-Ireland senior football championship in time for the 2018 season.

Tipperary Football Board chairman Joe Hannigan spoke out against Páraic Duffy’s proposals to alter the structure of the championship when suggesting that the format “will suit the strong counties”.

“Whatever chance we have of catching one provincial champion on a given day in this format we would have to beat two provincial champions. There is less of an opportunity for someone to catch out the big teams,” Shannon Rovers’ Joe Hannigan said.

In response Páraic Duffy argued that teams like Tipperary would, in actual fact, benefit from playing quality opposition. Since the qualifiers were launched in 2001 twenty-three difference counties have made it to the last eight; an achievement which Páraic Duffy said “every county can reasonably aspire to”.

“You should have no worries about playing three of the best teams in the country - you have no reason to. There seems to be a fear here in Tipperary that you will not be able to compete, but you should have more confidence in yourselves. You can compete with the very best and you have already proven that,” Páraic Duffy said.

“I think this proposal is a reasonable one and I believe that you have to change before it is forced upon you,” Mr Duffy added.

Páraic Duffy was warmly welcomed and introduced to the delegates by County Board chairman Michael Bourke.

“I am not here to persuade anybody,” Páraic Duffy said.

“I am asking you to read the document, to take it back to your clubs, to discuss it with your club members and to then make an informed decision about what is best for the Gaelic Athletic Association. I would not be here tonight talking to you unless I thought this was good for the GAA. I would ask you to read this before you do anything else,” Árd Stuirthóir Cumann Lúthchleas Gael Páraic Duffy added.

Since there was “no appetite” at national congress for a motion to do away with the provincial championships and because the options for a radical overhaul of the All-Ireland series are limited Páraic Duffy is proposing a “modest” medium term adjustment which he hopes will have a “positive impact on club championships across the country”.

Under the terms of the Duffy proposal the last eight teams in the All-Ireland football championship (four provincial champions and four qualifier winners) would be split into two groups of four and play off against each other. The system would involve an additional eight extra games, but the proposal also insists on a tighter schedule of games and a revised policy concerning replays which would ensure All-Ireland finals are played before September and thereby free up significant time for the scheduling of club championships.

Páraic Duffy believes the new format would reinvigorate a championship which has featured falling attendances and would ensure a fairer pathway to the All-Ireland semi-finals. As an illustration Mr Duffy compared the experience of his native Monaghan to Kerry. In 2016 Kerry beat Clare (twice) and Tipperary to reach an All-Ireland semi-final while Monaghan might face three games in Ulster just to reach a provincial final. The director general also admitted that the idea of the new format was to generate more funding.

“We want to generate funding at inter-county level in order to support the games at provincial, county and club level. The more we take in, the more we give out and I don’t think we need to apologise to anyone for that,” Páraic Duffy said.

“I would not have come forward with a proposal unless it involved condensing the inter-county championship - my concern is with the clubs first and foremost. I want to bring the All-Ireland finals forward to allow time for the club championships to be played in decent weather and under this format clubs will have access to inter-county players for an uninterrupted period of time,” Mr Duffy added.

Tom Maher, the secretary of the Competitions Controls Committee in Tipperary, made a significant contribution to the debate. Mr Maher pointed out that if Páraic Duffy’s proposal was applied to the 2016 season three further weekends would have been available to play club games in Tipperary. And, for anyone concerned about how the alteration might impact on the profile of hurling Páraic Duffy said: “I am a football man, but I have no hesitancy in saying that hurling is the better game and that hurling is the more spectacular game. Hurling, in my opinion, has nothing to worry about”.

Football Board chairman Joe Hannigan was concerned about the physical toll that the new schedule might exact on players. Mr Hannigan explained that the Football Board initially rejected Páraic Duffy’s proposal on the basis of players being asked to play three matches in just four weeks.

“It would be very unfair to ask a player to go out and physically do that,” Joe Hannigan said.

“I would be concerned about the impact it is going to have on the players,” the Shannon Rovers man added.

In response Páraic Duffy argued that “our players spend too much time training and not enough time playing matches. We seem to be afraid to ask our inter-county players to play games back-to-back, but we are not afraid to ask our club players to do that. Why?
I don’t think it is excessive”.

County Board treasurer Michael Power indicated that he was concerned about “how are we going to keep the GPA quiet and keep the GAA amateur” in the light of these proposals. In response Páraic Duffy said: “I don’t, for the life of me, see how this matter could be related to the GPA. There is a challenge there to keep the GAA amateur, but the issue does not just rest with the GPA. We need to look to ourselves. There is a serious issue there with relation to counties and club teams paying managers and coaches up and down the country. That has nothing to do with the GPA and that needs to be addressed”.

County Board chairman Michael Bourke revealed that club delegates will be asked to vote on the proposal at the January meeting of the Tipperary County Board - in the meantime delegates have been requested to take the document back to their clubs in order to discuss the issue.